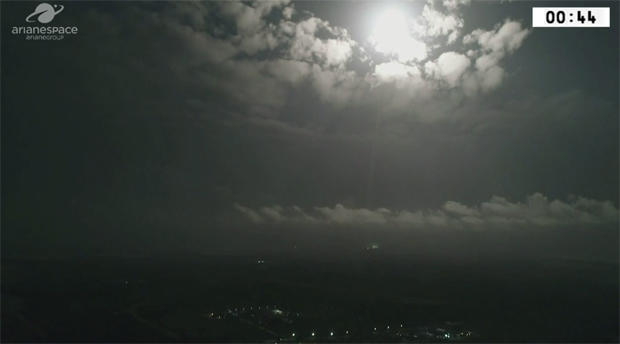 A European Ariane 5 rocket launched two communications satellites into the wrong orbit Thursday night, but both relay stations are healthy and should be able to use on-board thrusters to reach their intended operational orbits, officials said Friday.

The Ariane 5 blasted off from Kourou, French Guiana, at 5:20 p.m. ET Thursday evening carrying an SES communications satellite and another owned by Yahsat. The initial climb away to the east appeared normal and the first stage shut down and was discarded about nine minutes after liftoff.

Flight controllers confirmed second stage ignition but lost contact with the rocket a few moments later. Telemetry was never regained, but engineers were able to confirm later that both satellites had, in fact, been released from the upper stage.

Tracking data released Friday showed the satellites ended up in a highly elliptical orbit, roughly as planned, with a high point, or apogee, of around 26,800 miles and a low point, or perigee, around 144 miles. The planned "transfer" orbit was 27,900 miles by 155 miles.

While those numbers were relatively close, the inclination -- the angle between the plane of the orbit and the equator -- was 20 degrees instead of 3 degrees as planned.

Communications satellites are designed to operate 22,300 miles above the equator at zero inclination where they take 24 hours to complete one orbit. As such, they appear stationary in the sky, allowing the use of fixed antennas on the ground.

To reach geosynchronous altitude, the satellites are first boosted into highly elliptical transfer orbits. They then use on-board propulsion to circularize the orbit at 22,300 miles above the equator and to eliminate, or minimize, the inclination.

The SES-14 and Al Yah 3 satellites were expecting to null out a 3-degree inclination, not 20 degrees, and it will require more time -- and propellant -- to reach their geosynchronous outposts. SES said in a statement it will take a month longer than originally planned to get the job done.

"An anomaly occurred after ignition of the upper stage of the launch vehicle that resulted in the satellite separating early and failing to reach its planned transfer orbit," SES said. "SES has established a telemetry and telecommand connection to its SES-14 spacecraft and confirms that the spacecraft is in good health with all subsystems on board are nominal."

Despite the extra time and thrusting needed to reach geosynchronous orbit, SES said the satellite's useful lifetime will not be impacted.

Yahsat said in a statement that it also expects is satellite to reach the desired orbit.

"The mission experienced some challenges during the launch stages, which resulted in the Al Yah 3 satellite being inserted into an orbit that differed from the flight plan," the company said. "However, the satellite is healthy and operating nominally. A revised flight plan will be executed in order to achieve the operational orbit and fulfill the original mission."

Arianespace said an independent investigation board will look into the "trajectory deviation" experienced during launch. In the meantime, the European consortium is pressing ahead with preparations for downstream flights.

Jonathan McDowell, an astronomer at the Harvard-Smithsonian Center for Astrophysics who tracks rockets and satellites, said he suspects the problem may have been the result of incorrect trajectory or guidance data loaded into the Ariane 5 before launch.

"I can't see any way you can get that good of an orbit and yet be that many degrees off in azimuth," he said in a telephone interview. "I can't think of any failure in the history of the space age that has been that big of a deviation without it being that kind of input data screw up. Human error at some level. Typing the wrong number in or something like that, using the wrong coordinate system."

Even with the unexpected anomaly, the Ariane 5 remains one of the most reliable heavy-lift rockets in the world, a major player in the commercial satellite launch industry. Going into Thursday's campaign, the Ariane 5 had chalked up 82 successful flights in a row dating back to 2002.

NASA plans to use the rocket to launch the $8.8 billion James Webb Space Telescope in 2019.