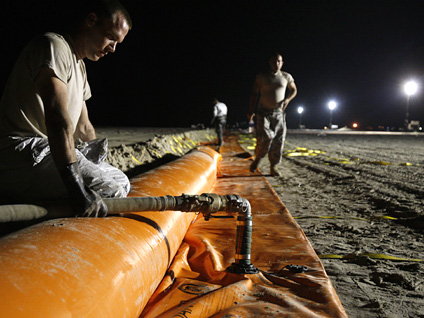 Three men in South Florida are facing multiple charges after leading police on a high-speed chase.

Two of the suspects were subdued by officers using tasers, which are becoming more and more popular with police, and more and more controversial with critics.

The chase, in Miami, led police on dangerous pursuit across highways, over sidewalks and through heavy traffic. It ended with a dramatic crash but no injuries, as Broward County officers took down the driver by taser.

CBS News correspondent Don Teague reported on "The Early Show" tasering happens more often than ever -- the taser has become weapon of choice for police.

Teague pointed out more than 12,000 law enforcement agencies have now added tasers to their arsenals. Houston police alone have discharged them 2,500 times since 2004.

But some are questioning just who is getting shocked.

From incapacitating a disruptive student in Florida to a great-grandmother in Texas, you can go online and find one shocking example after another of tasering, Teague said.

Peter McFarland, who was tasered by police in California, told CBS News, "All of a sudden, they just showed up. And they came in here like there was a fire going on or some gunfight was going on."

McFarland, who suffers from a heart condition, is suing Marin County police after he was tased four times in his own home.

In other cases, the device has proved fatal.

A study by Amnesty International says that, in at least 35 states, taserings have led to deaths -- 55 fatalities in California and 52 in Florida, alone.

Thomas Ruskin, a former detective with the New York Police Department, told CBS News, "In most cases, the tasers have been a very good tool. It's a lot better to think of someone possibly being tasered than being shot."

Rodriguez said, "It is easy for us all to watch the video and make our judgment about the decision at the time. We haven't been there arresting a suspect. You have, many times. Is there any time you wished you would have had a taser?"

He responded, "Good point. It is easy for us when we sit on the couch and watch this stuff go down. Though cop should have to meet a bad guy one on one. They have a fist, you take your nightstick. They take your stick, it will either be a taser, now the taser stops us from using a gun in many cases, and that's a good thing."

Rodriguez, who was tased for research purposes, said it was "the most excruciating pain followed by, literally, paralysis."

She asked, "Could they be more dangerous than people think?"

Stanton replied, "I'll ask you this. You've been tased. Have you been shot?"

Rodriguez responded, "I haven't been shot, it's better than being dead, but if an officer used it on me unjustifiably, as we've seen many instances, it would have been inhumane."

Stanton said, "Right. Those officers should be investigated and locked up, but in many professions there malpractice with doctors, lawyers, et cetera."

John Burton, a civil rights attorney, weighed in on Stanton's remarks, saying the taser is not a substitute for lethal force.

He explained, "Lethal force is used very, very rarely, 95 percent of police officers never fire their sidearm in their entire career. It's only to be used in the most extreme circumstances. When those are present, no rational officer would use a taser because lethal force is used to stop a lethal threat. Tasers are used on people frequently who are doing very little, other than not going along with the program of the police."

Burton replied, "Well, right. And it's, also, and another point you made is that it's much more dangerous than the manufacturer, who provides a training, tells the officers. There have been over 500 fatalities associated with taser use or extreme injuries caused by falling, darts hitting people in the eye, people exploding because of being near flammable liquids, et cetera."

Rodriguez said to both men, "I think that point both of you can agree on that tasers should not be abused."

But is there anything that can be done to prevent abuse?

Stanton said, "A cop tells you to pull over, pull over. Don't ram him three times, don't take a swing at a cop."

"You know full well some people do that and officers, you never know how they will react," Rodriguez said. "Is there anything you can do to teach officers not to do that?"

Stanton said, "Absolutely, more comprehensive training for the officers. Teach them how to use the tools in their tool bag."