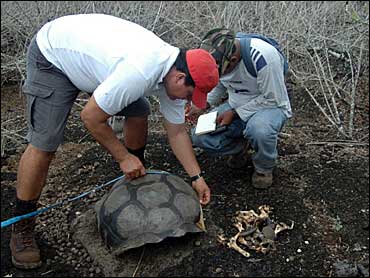 Poachers sometimes kill the protected tortoises and use the meat for consumption or for sale on the black market.

Of the remains discovered, five were youth of up to 15 years old, and three were adult females — possibly older than 80 — the park said in a statement.

The park called their deaths a great loss, saying some had been hatched from artificially incubated eggs and raised for seven years by scientists before being released into their natural habitat.

Galapagos Islands authorities estimate there are about 7,000 of the giant tortoises left.

Some 625 miles off Ecuador's Pacific coast, the Galapagos are world renowned for their unique plant and animal life. Charles Darwin's observations of the islands' finches inspired his theory of evolution.