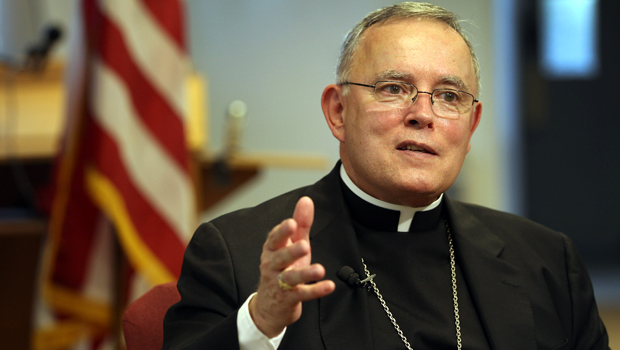 PHILADELPHIA -- The head of the Roman Catholic Church in Philadelphia is closing the door opened by Pope Francis to letting civilly remarried Catholics receive Communion, saying the faithful in his archdiocese can only do so if they abstain from sex and live "as brother and sister."

Archbishop Charles Chaput, who is known for strongly emphasizing strict adherence to Catholic doctrine, issued a new set of pastoral guidelines for clergy and other leaders in the archdiocese that went into effect July 1. The guidelines reflect a stance taken by St. John Paul II.

"Undertaking to live as brother and sister is necessary for the divorced and civilly remarried to receive reconciliation in the Sacrament of Penance, which could then open the way to the Eucharist," the guidelines read.

Church teaching says that unless divorced and remarried Catholics received an annulment - a church decree that their first marriage was invalid - they are committing adultery and cannot receive the sacrament of Communion.

Chaput says the new instructions stem from Francis' sweeping document on family life released in April. That document - called "The Joy of Love" - opened a door to divorced and civilly remarried Catholics.

Francis didn't create a church-wide admission to Communion for divorced and civilly remarried Catholics as some progressives had wanted. But in the April document, he suggested bishops and priests could do so on a case-by-case basis in what could become a significant development in church practice.

John Paul II, in his 1982 document on the family, proposed the brother-sister option for divorced and remarried couples as the only way they could receive Communion.

In Francis' revision of that document, which conservatives like Chaput have criticized for sowing confusion, Francis made clear that John Paul's proposal was simply unrealistic and unhealthy for families.

In a footnote to "The Joy of Love," Francis wrote that many people, while acknowledging the brother-sister option, "point out that if certain expressions of intimacy are lacking, it often happens that faithfulness is endangered and the good of the children suffers."

The Philadelphia guidelines say Catholics in same-sex partnerships, civilly remarried parishioners and unmarried couples living together should not be permitted to serve on parish councils, instruct the faithful, serve as lectors or dispense Communion.

Such "irregular" relationships "offer a serious counter-witness to Catholic belief, which can only produce moral confusion in the community," the guidelines state, acknowledging it is a "hard teaching."

The new guidelines also address Catholics "who experience same-sex attraction." Chaput says such parishioners can still live out a heterosexual marriage with children, despite that attraction. Others in same-sex relationships should avoid sexual intimacy.

Bishops wield enormous authority in their dioceses in laying down such guidelines and interpreting church doctrine. Since Francis only offered bishops the option of case-by-case allowances in his April document, Chaput with these guidelines is clearly opting out for the church's nearly 1.5 million members in the Philadelphia Archdiocese.

After the papal document was released, several U.S. bishops said that, according to their interpretations, Francis' statement did not require any change in the practice of barring Communion for Catholics who divorce and remarry without an annulment.

The Rev. Thomas Reese, senior analyst for the National Catholic Reporter, said Wednesday that he thinks Francis is empowering bishops to make their own judgment calls on how church teaching should be applied in their diocese.

"Somebody in the diocese next door could release a letter that says something totally different," Reese said.

Robert Bankle, a retired editor of a construction publication who volunteers as a greeter at Philadelphia's Cathedral Basilica of Saints Peter and Paul, said Wednesday he sees the guidelines as a clarification Chaput was obliged to make.

"If something's not clear, let's make it clear, even if it's unpopular," said the 75-year-old from Bucks County, just outside the city. "If you want to be a member of the Catholic Church, these are the guidelines, these are the rules, these are the laws." If people disagree, he said, "don't be a Catholic."

Mia Trotz, an 18-year-old college student from Philadelphia who was selling ice water outside the cathedral, said she didn't think the guidelines made sense.

"The whole part about being a good Catholic or Christian is helping people or being more accepting of people, but most of the time they're going against what they're telling you to do," she said of church leaders.

"I'm Catholic but I don't agree with everything they do or believe, so it's kind of hard to be Catholic sometimes."