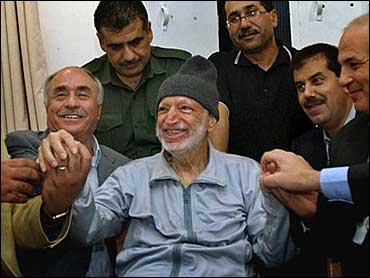 Yasser Arafat's brain, heart and lungs are still functioning and the possibility of euthanasia has been "ruled out," Palestinian Foreign Minister Nabil Shaath said Tuesday, confirming that the long-time Palestinian leader is in a coma.

He said Arafat's long confinement in Ramallah by Israeli forces contributed to his deterioration.

Arafat's wife, Suha, has used French privacy laws to bar access to the Palestinian leader and there have been frequently conflicting reports about the status of his health.

"President Yasser Arafat's health worsened in the night," said Gen. Christian Estripeau, spokesman for the hospital. "His coma, which led to his admission to the intensive care unit, became deeper this morning." Arafat was put in intensive care on Nov. 3, five days after he was rushed to France.

Estripeau said doctors were withholding a prognosis but that his deterioration marked "a significant stage."

The news of Arafat's deteriorating condition came after a dramatic dispute between Mrs. Arafat and Palestinian officials whom she accused of trying to topple the leader after four decades in power.

But Shaath said after the visit that the dispute with Arafat's wife was over.

In an angry outburst, Suha Arafat on Monday had accused the leaders of traveling to Paris to try to oust her husband from power and "bury" him "alive."

Palestinian leaders decided Tuesday they would seek to have Yasser Arafat buried at his West Bank headquarters, the deputy speaker of the Palestinian parliament told The Associated Press.

Since Israel opposes a funeral for Arafat in Ramallah, the feeling there has been that it will be in the Gaza Strip. Since Gaza would not be a pleasant place for foreign diplomats, there might be a ceremony in Jordan or Cairo, reports Berger. The problem is that Islamic law requires burial within 24 hours of death.

Abington told CBS News he was unsure who, if anyone, might represent the U.S. at Arafat's funeral. There has been no decision in Washington whether the Bush administration would send someone.

Palestinians have been making contingency plans in the event of Arafat's death.

Qureia has assumed some emergency financial and administrative powers. Abbas has chaired a series of meetings of the PLO executive committee. But neither politician has much grass-roots support among Palestinians or important militant groups.

Suha Arafat, who has been married to him for 13 years and is the mother of his daughter, seems to have aligned herself with hard-liners who apparently seek to lead in a post-Arafat era, though some Palestinian officials said her motives are more financial.

According to a senior official in Arafat's office, she has received monthly payments of $100,000 from Palestinian coffers and is widely believed to control vast funds collected by the PLO.

This year, French prosecutors launched a money-laundering investigation into transfers of $11.4 million into her accounts. She has refused to talk to reporters about Palestinian finances. Mrs. Arafat, 41, lives in Paris and has not been to the West Bank since the latest round of Palestinian violence began in 2000. That's also the last time she saw her husband before he fell ill.

Abington, in East Jerusalem, calls all the stories about Arafat himself having hundreds of millions of dollars in secret accounts "an urban myth." He said all these stories come from an old International Monetary Fund report but the situation has been cleaned up. Abington said now all monies are under the control of Salim Fayyed, the Palestinian Finance Minister, and it is all transparent through the Palestine Investment Fund and audited yearly by PriceWaterhouseCoopers.