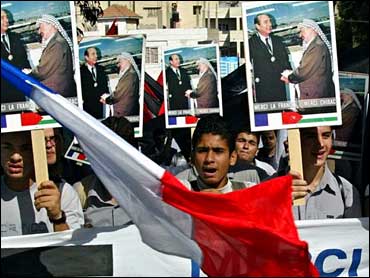 A high-ranking Palestinian official says Yasser Arafat has lapsed into a coma. Two Arafat aides deny the report, one of several Thursday indicating a sudden turn for the worse for the 75-year-old Palestinian leader, said by an Israeli source to have suffered organ failure.

Palestinian officials said earlier that Arafat lost consciousness repeatedly Thursday, a day after his condition deteriorated and he was transferred to the intensive care unit of the French military hospital where he is being treated outside Paris.

Early Thursday, it was reported Arafat was undergoing a new battery of tests in connection with his so far unexplained illness.

Palestinian sources have said doctors still don't know the cause of the blood and digestive disorders uncovered over the past few days.

According to CBS News Correspondent Larry Miller, Israeli intelligence is reported to have information that Arafat has some type of organ failure.

Palestinian Cabinet minister Saeb Erekat denies both the coma report and the report that Arafat has some kind of organ failure. Erekat says Arafat's wife, Suha, has told him the the Palestinian leader's condition is "stable but difficult." Describing Arafat's condition as "stable and serious," Erekat also says the most recent blood tests and CT scans - done Wednesday and Thursday morning - are encouraging.

Mohammed Rashid, Arafat's financial adviser, also denied that reports that Arafat had slipped into a coma.

"Last night, several blood and bone marrow tests were done that required the president to be in an isolation unit for several hours, and there is no truth to any of the reports that he is in a coma," Rashid said.

Regardless, the Israeli military was placed on high alert, and was following the developments closely, Israeli security sources said. The Israeli army has a contingency plan, called "new leaf," to deal with the fallout from Arafat's death, including possible Palestinian riots.

French hospital and military officials refused to comment, but more information is expected from a previously planned news conference to be held later Thursday by an Arafat spokeswoman.

Israel Radio reported early Thursday that Mahmoud Abbas, No. 2 in the hierarchy of Arafat's Palestine Liberation Organization and his first prime minister, was on his way to Paris.

But later in the day, it was reported that Abbas is not at this time planning to go to Paris.

Arafat's top aides deny there has been any setback and accuse Israel of spreading rumors. The report first aired on Israel's Channel Two television.

"These unfounded reports are not coming from French medical teams, these are leaks from the Israeli side," said Mohammed Dahlan, a former Palestinian security chief.

"Leaking such rumors will only complicate things and also complicate the situation within the Palestinian public," he told reporters in Paris.

A spokeswoman for Arafat says on Wednesday, he felt well enough to ask about the U.S. presidential election. An aide later issued a statement in Arafat's name congratulating President Bush on his re-election.

Arafat, who has been ill for three weeks, was flown to the French military hospital on Friday after passing out briefly at his west Bank headquarters.

He was initially described as having a bad flu, with symptoms of vomiting and diarrhea.

Palestinian officials insist publicly leukemia and other forms of cancer, as well as any type of poisoning, have been ruled out.

Undoubtedly conscious of the anxiety back home at the thought of a future without Arafat - who has led the Palestinians for 40 years with no obvious successor - they have previously described his condition as improving and said more tests were being done.

"There are no setbacks," he told reporters outside the hospital. "It's no secret he's ill, that's why he's in France, but there is no threat, there is no danger, no serious degradation."

In Israel, speculation has ranged from a viral infection to stomach cancer.

Arafat's brother, Fathi Arafat, has had stomach cancer for four years and is currently hospitalized in Cairo, Egypt, with an advanced stage, according to doctors there.

On Tuesday, one source who said he had been briefed on the Palestinian leader's status told The Associated Press that his condition was "fatal" - but he gave no further details and the claim could not be confirmed.

On Wednesday, Shahid said Arafat felt well enough to ask about the U.S. presidential election. An aide later issued a statement in Arafat's name congratulating President Bush on his re-election.

"Our goal is to prepare for the day after, if and when he dies," he told Israel Radio.

Israel now has plans - undisclosed - for how it would handle the death of Arafat: in particular, how to deal with Palestinian grief and how to try to keep that outpouring from turning violent.

Israeli Prime Minister Sharon has vowed not to let Arafat be buried in Jerusalem.

Israeli intelligence was widely criticized after it was caught off guard last week by the sudden deterioration in Arafat's health.

Thursday, Shalom said Arafat's condition "is very serious." Without giving any details, he added: "It is too soon to eulogize Yasser Arafat."