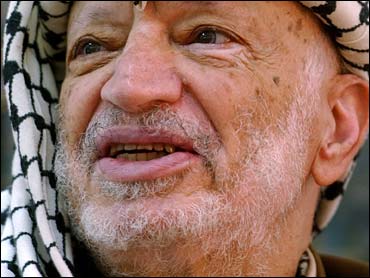 Ailing Palestinian leader Yasser Arafat's condition worsened overnight, according to hospital officials, who said Tuesday that the coma he has been in for six days has deepened.

Arafat is in a "very difficult and serious" situation, the Palestinian foreign minister confirmed Tuesday after he and other officials met their critically ill leader's doctors.

Asked after a visit to the hospital treating Arafat about reports that he was close to death, Nabil Shaath said: "Only God knows the answer to that."

"His situation is very difficult and critical," he told reporters. He did not say what the diagnosis was, or whether the delegation had actually seen Arafat face to face.

Another senior Palestinian official, speaking on condition of anonymity, said Arafat had only hours to live.

But his nephew, Nasser al-Kidwa, the Palestinian Authority's ambassador to the United Nations, told The Associated Press "the situation is very difficult, but he is still alive."

"President Yasser Arafat's health has worsened during the night," Gen. Christian Estripeau, spokesman for the Percy Military Training Hospital in Clamart, France, said. "His coma, that had lead to his admission to the intensive care unit, became deeper this morning. This marks a significant stage toward a development for which we reserve our prognosis."

The conflicting announcements Tuesday came after a day of open infighting between Arafat's wife, Suha, and the top Palestinian officials who were chosen by party leaders to at least temporarily take over the responsibilities of the gravely ill 75-year-old Palestinian leader.

The Israeli newspaper Haaretz quotes sources as saying hospital authorities will allow some of the Palestinian officials to visit Arafat Tuesday. It's not clear whether that is being done with or without Mrs. Arafat's consent.

Earlier in the day, Suha Arafat had accused the four Arafat aides of coming to the French capital with the sole intention of usurping Arafat as leader of the Palestinian people.

"I tell you they are trying to bury Abu Ammar alive," she shouted, using Arafat's nom de guerre, in a furious telephone call Monday to Al-Jazeera television.

Mrs. Arafat was also insistent that her husband will recover.

"He is all right, and he is going home," said Mrs. Arafat, who some Palestinians view as too powerful, partly because she is believed to control vast amounts of Palestine Liberation Organization money.

The Arafats have lived apart for years - she in Paris, and he in Ramallah, on the West Bank - and until he became sick last month, they had not seen each other since the year 2000.

Mrs. Arafat's accusation that Arafat aides are trying to prematurely shove him aside enraged Palestinian leaders Monday, at first causing them to cancel plans to visit him.

Hours later, the cancellation was itself cancelled, and the four flew to France, where they were rebuffed by Suha.

On the West Bank, other Arafat lieutenants are denouncing Suha Arafat's actions and comments.

"We are Yasser Arafat's family. We knew Yasser Arafat even before Mrs. Suha Arafat was born," said Palestinian Cabinet minister Salah Taamri, speaking in Ramallah on Monday. "We care for Yasser Arafat and no one has the right to deny the truth from the Palestinian people."

"What came from Mrs. Arafat doesn't represent our people," said Rahim, accusing Suha of "wanting to destroy the Palestinian leadership's decision and to be the lone decision maker."

Qureia has assumed some emergency financial and administrative powers that Arafat normally would wield. And Abbas has chaired a series of meetings of the PLO executive committee in Arafat's absence in an effort to project unity.

Both politicians were chosen by members of Arafat's Fatah party, but neither has much grassroots support among Palestinians or important militant groups.