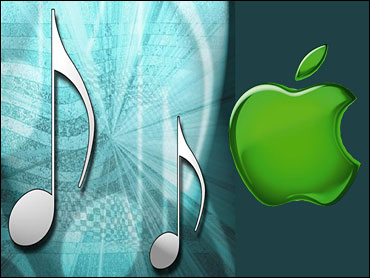 Apple, which also announced color screens for its iPod digital music players, said the new iTunes software comes with a podcast directory that lists more than 3,000 free audio programs. It also sports a new menu and the ability to automatically send new episodes of podcasts to the user's computer.

"Podcasting is the next generation of radio," Apple CEO Steve Jobs said in a statement.

Podcasts are downloadable audio files that are often similar to radio programs. They allow anyone to become a Web broadcaster.

On iTunes, podcasts focus on a range of topics from electronic gadgets to movies and astronomy. Shows come from mainstream organizations such as ABC News and Newsweek as well as Web journals, or blogs, like Engadget.

The software is available for both Mac and Windows computers.

Apple also said it is merging its iPod and iPod photo lines, so all models will now have color displays that can view photos and play slideshows.

The 20-gigabyte model can hold about 5,000 songs and costs $299, while the 60-gigabyte version holds 25,000 songs and sells for $399. That means customers will get a photo model for about the same price they previously paid for the standard, black-and-white screen.

The new offerings come amid warnings from some analysts that cell-phone makers could threaten Apple's grip on the market for digital-music players if portable phones can be rigged to play music.

"We do think cell phones are a legitimate threat but it could end up like what happened to the camera-phone market," said Shaw Wu, an analyst for American Technology Research in San Francisco. "Cameras may have helped the cell phone guys to get customers to buy new phones and upgrade but it didn't slow down the digital-camera market."

Too many questions remain about whether cell phone batteries can handle the extra load of playing music, or whether phone companies would want customers to burn battery power listening to music instead of talking on the phone, Wu noted.

Apple also said it was cutting $20 off the price of the $149 iPod Shuffle, which uses flash memory instead of a hard drive and can store less music.

Suranga Chandratillake, the company's founder and chief technology officer, said Tuesday the company's indexing software has identified about 20,000 channels of user-generated audio and video, generating about 500 hours of programming a day.

Search engines and podcast directories generally index audio and video by analyzing text that appears near the file or using humans to create summaries. Some also pull closed-captioning transcripts from video programming, but user-generated content generally carries no closed captioning.

Chandratillake said Blinkx attempts to fill the gap by using speech-recognition softwre to transcript feeds when closed captioning is unavailable. It already indexes feeds, mostly video, from companies with which it has deals, including CNN, the British Broadcasting Corp. and Movielink LLC.