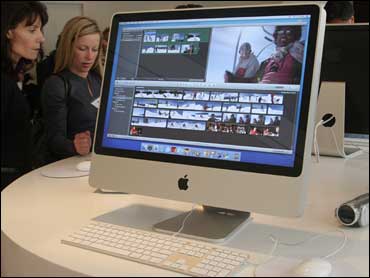 In the unusually intimate setting of a small auditorium at its Cupertino, Calif., headquarters, Apple Inc., on Tuesday unveiled a new line of iMacs as well as new versions of its iLife and iWork software. The event, attended by perhaps a couple hundred journalists and analysts, was far more low-key than Apple's usual high-profile announcements, but CEO Steve Jobs was as enthusiastic as ever about the company's new products.

New PCs don't usually get a lot of attention. But anything Apple announces these days is of interest because the company has been on a roll with record earnings — not just from iPods and iPhones, but from its Macintosh computers as well. Jobs reported a 36 percent jump in Mac sales, which he said were "more than three times the industry growth rate."

Apple is replacing its old white plastic iMacs with a new line made from "aluminum and glass." Aside from being lighter and having a more polished look, the new Macs, according to Jobs, are more environmentally friendly because they're made from materials that are more valued by recyclers.

The company will no longer offer a 17-inch iMac; instead, it will offer two 20-inch models and a 24-inch model. The iMac is an all-in-one system, with the monitor and all components in one chassis with an external keyboard and mouse. All units now have a glossy display that's optimized for digital photos and video. The chassis and keyboard are thinner than in previous iMacs.

While the new Macs are somewhat interesting, Apple's most important announcements focused on software. The company is releasing a new version of both its iLife and iWork applications. iLife, which is free with all new Macs and $79 for existing systems, includes GarageBand for creating and editing music, iPhoto for pictures, iMovies for video, iWeb for creating Web sites and iDVD for burning video to DVDs. The new version of GarageBand has a feature called "Magic GarageBand" that lets users add instruments and perform with a virtual band, almost guaranteeing that you'll sound good. The new iPhoto now has a feature called "events" that semi-automatically organizes your photos by events. It does this by grouping photos by date taken. All pictures taken on a certain day would be assumed to be from a specific event. If so, you can name it, for example, "Sophie's Birthday Party." If it turns out you had pictures from more than one event that day, you can split them into two or more events — and if you have an event (like a vacation) that spans several days, you can merge multiple days into a single event. Each event is represented by whatever picture you select from its contents, but you can quickly "skim" to other pictures from the event by moving your mouse over that initial photo. While there's nothing really revolutionary about this — Microsoft's Photo Gallery, which comes with Windows Vista, can be sorted by date — the software does make it a bit easier to organize your photos, and the skimming feature is very gee whiz.

I was most impressed with what I saw in the new version of iMovie, probably because I've been struggling with other video-editing programs. Like other programs, the software automatically breaks your videos into discrete scenes. However, there's also a feature that lets you quickly skim over a scene to find a specific part. That alone can make editing quite a bit easier — it means you don't have to watch the entire clip in real time to find what you're looking for. Jobs said Apple has applied for a patent on the skimming technology used in both iMovie and iPhoto.

Apple also announced a new version of its iWork productivity suite. At $79, it's a bargain compared to Microsoft Office (which is available for both Windows and Macs, typically for $200 or more). The new iWork has an improved version of the Keynote presentation program (similar to Microsoft PowerPoint), with new themes, transitions between slides and backgrounds. There is also an improved word processor for both page layout and general writing. Apple has also introduced a spreadsheet to iWork to compete with Microsoft Excel. The spreadsheet, called Numbers, is oriented towards creating what Jobs called "beautiful spreadsheets," with one feature that lets users easily format the look of one part a spreadsheet without affecting with other portions.

Even with the new iMacs, Apple computers tend to be more expensive than models from competitors such as Dell and Hewlett Packard. But considering all the bundled hardware (like a built-in video camera on all Macs) and the free iLife software, the price delta between a fully loaded PC and a Mac is no longer as big as it once was. In fact, Jobs argues that Macs represent a better value than comparable PC — and, when asked why he doesn't offer cheaper machines, he quipped, "we don't ship junk."

A syndicated technology columnist for over more than two decades, Larry Magid serves as on-air Technology Analyst for CBS Radio News. His technology reports can be heard several times a week on the CBS Radio Network. Magid is the author of several books including "The Little PC Book."
View CBS News In
CBS News App Open
Chrome Safari Continue
Be the first to know
Get browser notifications for breaking news, live events, and exclusive reporting.