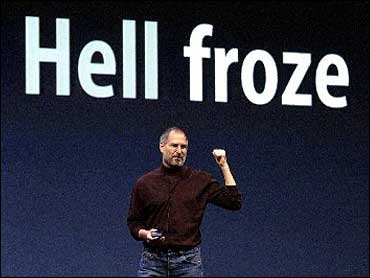 It was a strange sight Thursday – Steve Jobs touting a Windows product. But the chief executive of Apple Computer Inc. had a perfectly sensible motive.

In a move to reach the masses who use computers based on Microsoft Corp. software, Jobs unveiled a Windows-compatible Apple iTunes Music Store, an Internet song-downloading service that has proven successful among Macintosh users.

But Mac users comprise only about 3 percent of the computer-buying public, and now Apple is entering a market crowded with rival music services for the Windows world.

For its Windows launch, Apple managed to pull some exclusive deals that it hopes will help it maintain its lead in the legal music downloads market. Jobs said last week that Apple has 70 percent market share, with more than 13 million songs sold since the music store launched April 28.

"And that was just on a Mac," Jobs said.

Now that the store has been revamped to work on Windows computers as well, Jobs said the company aims to sell 100 million songs by the store's first anniversary. "ITunes is probably the best Windows application ever," Jobs said.

Apple has signed an exclusive partnership with America Online, linking songs from the AOL Music site to the iTunes store.

New features also have been added to iTunes. They include audio books, with the help of an exclusive deal with Audible.com; the ability for parents to give their children a monthly "allowance," or a set account with the store; gift certificates; and preferred playlists of celebrities.

The main new feature, however, is Windows compatibility.

"This is a feature a lot of people thought we'd never have until ... hell froze over," Jobs said during a media event that included a live performance by singer Sarah McLachlan and Web video conferences with the Rolling Stones' Mick Jagger, rapper Dr. Dre, and U2's Bono.

Apple faces stiff competition from rivals such as the revived Napster 2.0 and MusicMatch. Napster, for example, will have a half-million songs when it officially launches Oct. 29; Jobs said iTunes will carry more than 400,000 by then.

But some analysts believe Apple will likely remain a front-runner as the business of legal song downloads grows.

"They've got a good target audience already and now they could attack the other 97 percent," said analyst Dan Niles of Lehman Bros. "How it ends up is unclear, but theoretically, they could have a 20 times bigger market."

CBS News Up To The Minute Computer Consultant John Quain says, "It was successful because it was the first one that came out that said, 'you can pay 99 cents a song and you get to download it, burn it on a CD,' etc.

"Before the music industry was very nervous. But what people want is to do what they want with the music. iTunes did that."