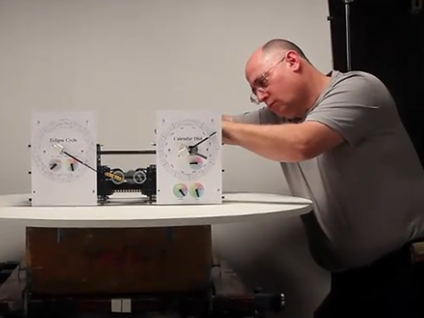 Working in the comfort of his garage, Apple software engineer Andrew Carol constructed something quite remarkable: a recreation of the 2000 year-old Antikythera Mechanism made out of Legos.

The Antikythera Mechanism, built by the ancient Greeks around 150 BC, was recovered from a Roman shipwreck in 1901. When the device was retrieved, however, it was so corroded that nobody fully comprehended its significance.

It would take researchers using advanced imaging tools another century to realize that what they were looking at was the world's first computing device. In this case, the mechanism was used by the ancients to track celestial movements and predict lunar and solar eclipses. (The original mechanism is in the National Archaeological Museum in Athens.)

Scientific American's parent company commissioned the videographer John Pavlus to record Carol as he went about his work. Marshaling some 1,500 Lego Technic parts for the project, Carol completed the work in 30 days. You can find out more about the background of the Antikythera here as well as by reading what Carol has to say about the math that went into the project by clicking here.

In the meantime, enjoy this delightful video, a modern homage to an ancient genius.