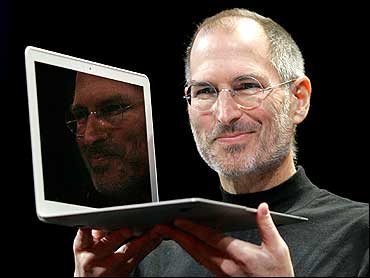 Apple Inc. co-founder and Chief Executive Steve Jobs said Wednesday he is taking a medical leave until the end of June - just a week after the cancer survivor tried to assure investors and employees his recent weight loss was caused by an easily treatable hormone deficiency.

Jobs, 53, said in a letter last week that he would remain at Apple's helm despite the hormone problem, and that he had already begun a "relatively simple and straightforward" treatment. But in an e-mail to employees Wednesday, Jobs backtracked.

"During the past week I have learned that my health-related issues are more complex than I originally thought," he wrote.

Apple's shares have surged and crashed over the last year in step with rumors or news about the CEO's health and his gaunt appearance. While the top executive's health is an issue for investors in any company, at Apple the level of concern reaches fever pitch because Jobs has a hand in everything from ideas for new products to the way they're marketed.

CBS News Science and Technology Correspondent Daniel Sieberg discussed Jobs' critical importance to Apple's mystique -- and bottom line and stock price -- on The Early Show. To see the video, click here.
Jobs has run Apple for more than a decade and no CEO is considered more critical to the identity of his company, reports CBS News correspondent Anthony Mason. To investors, Steve Jobs is Apple - the wizard behind the stunning success of the iMac, the iPod and the iPhone.

"Envisioning Apple without Jobs is something that is going to be difficult to do," said CNET's Tom Krazit. "But it's important to emphasize that there are over 32,000 people who work for Apple now; this is not a small company like it was when he took over in 1997."

Last week, Jobs said his disclosure of his hormone problem was "more than I wanted to say, and all that I am going to say" about his health. It came on the eve of Macworld, the biggest Apple trade show of the year, and Jobs said he wanted everyone to relax and enjoy the show.

Even so, the limited amount of information in that announcement did little to soothe Wall Street's nerves. Medical experts not involved in Jobs' treatment said it was unclear what was behind his weight loss, but some specialists said Jobs' pancreas could be the problem, since the organ makes digestive enzymes that are key for nutrition.

Apple's history of keeping information about Jobs' health under wraps is only fueling the speculation. The company waited until after Jobs underwent surgery in 2004 to treat a very rare form of pancreatic cancer - an islet cell neuroendocrine tumor - before alerting investors. That type of cancer is easily cured if diagnosed early, unlike the deadlier and more common adenocarcinoma.

And last summer, Cupertino, Calif.-based Apple insisted Jobs' weight loss was due to a common bug, even as The New York Times cited anonymous sources who said Jobs had undergone "a surgical procedure" to address the problem.

"They'll tell you the least they can tell you," longtime industry analyst Roger Kay of Endpoint Technology Associates said after Jobs' disclosure Wednesday. "They're trying to have it both ways, to protect their guy's privacy and feelings and at the same time somehow signal the market."

Apple's chief operating officer, Tim Cook, will take over Jobs' responsibilities while he is on leave, though Jobs said he plans to remain involved in major strategic decisions while he is out.

Cook is seen as one of Jobs' most likely successors, along with Apple's top marketing executive, Philip Schiller. American Technology Research analyst Brian Marshall - who last week predicted Jobs would step down this year - said Wednesday's announcement tips the bets in Cook's favor.

"The company has been soft-signaling to the Street for a while now that Steve Jobs is not going to be CEO forever," he said. "This will be sort of a trial period for Cook to be chief executive."

Cook lacks Jobs' charisma and showmanship, but is seen as a solid pick otherwise.

"No doubt that Apple is losing the greatest pitchman on earth, but people still want to buy Apple products," Munster said.

He added that the stock is grossly undervalued and presents a buying opportunity.

The analyst pointed to Tim Cook, who will oversee Apple's daily operations during Jobs' absence.

"Tim Cook is a pretty unemotional person, but his ability to run a company is second to none," Munster said. "He is very capable of running the operations of the company."

Munster also noted that while investors may be "frustrated" with how Apple has handled the disclosures regarding Jobs' health, they should not be dissuaded from investing in the company.