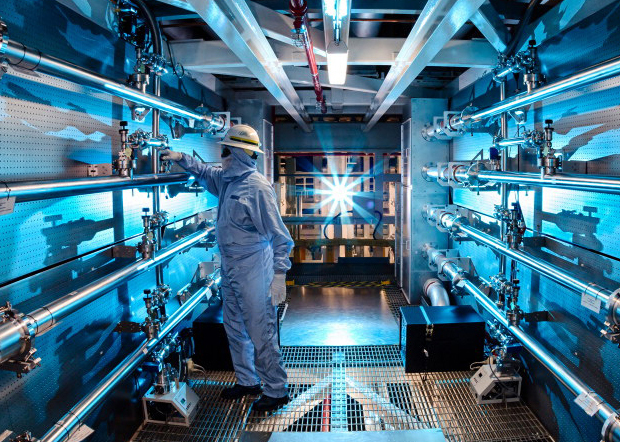 Scientists have come one step closer to harnessing the power of the sun. Researchers at the National Ignition Facility (NIF) have passed a milestone in achieving self-sustaining nuclear fusion -- but you won't hear about it from the researchers. The NIF team has been furloughed as a result of the U.S. government shutdown, which began on Oct. 1, and is not releasing updates to the press.

According to the BBC, a research experiment conducted in late September succeeded in releasing more energy through a fusion reaction than it absorbed by the fuel going in. NIF is the first research facility in the world to achieve this goal. A spokesperson for the NIF could not give CBSNews.com a comment on the results of the experiment.

NIF's method for achieving fusion involves sending 192 laser beams through a 1,500-meter journey that increases its energy output by a factor of more than a quadrillion. The laser beams' energy grows from one-billionth of a joule to 4 million joules in 5 millionths of a second.

A breakthrough in nuclear fusion is widely considered the holy grail of achieving an unlimited clean energy source.

Scientists believe that fusion can fuel our future without threat of nuclear proliferation or environmental damage because the process of creating fusion requires very few resources. One of the biggest challenges in producing energy derived from fusion has been to pass the break-even point -- a goal that has eluded scientists for nearly 50 years.

Nuclear fusion is not to be confused with nuclear fission. Instead of splitting an atom's nucleus, like in fission, nuclear fusion is the process of bringing together two atomic nuclei to form a new nucleus.

While the NIF has passed the break-even point, it is just shy of reaching "ignition" -- when nuclear fusion produces as much energy as is supplied to the lasers.

The NIF set a goal for achieving ignition by 2012, but a series of technical difficulties put the research behind schedule. The $3.5 billion Livermore, Calif. lab houses the world's largest laser. A research facility in Cadarache, France called the International Thermonuclear Experimental Reactor (ITER) is also pursuing nuclear fusion research. However, ITER scientists aim to conduct experiments in burning plasma.