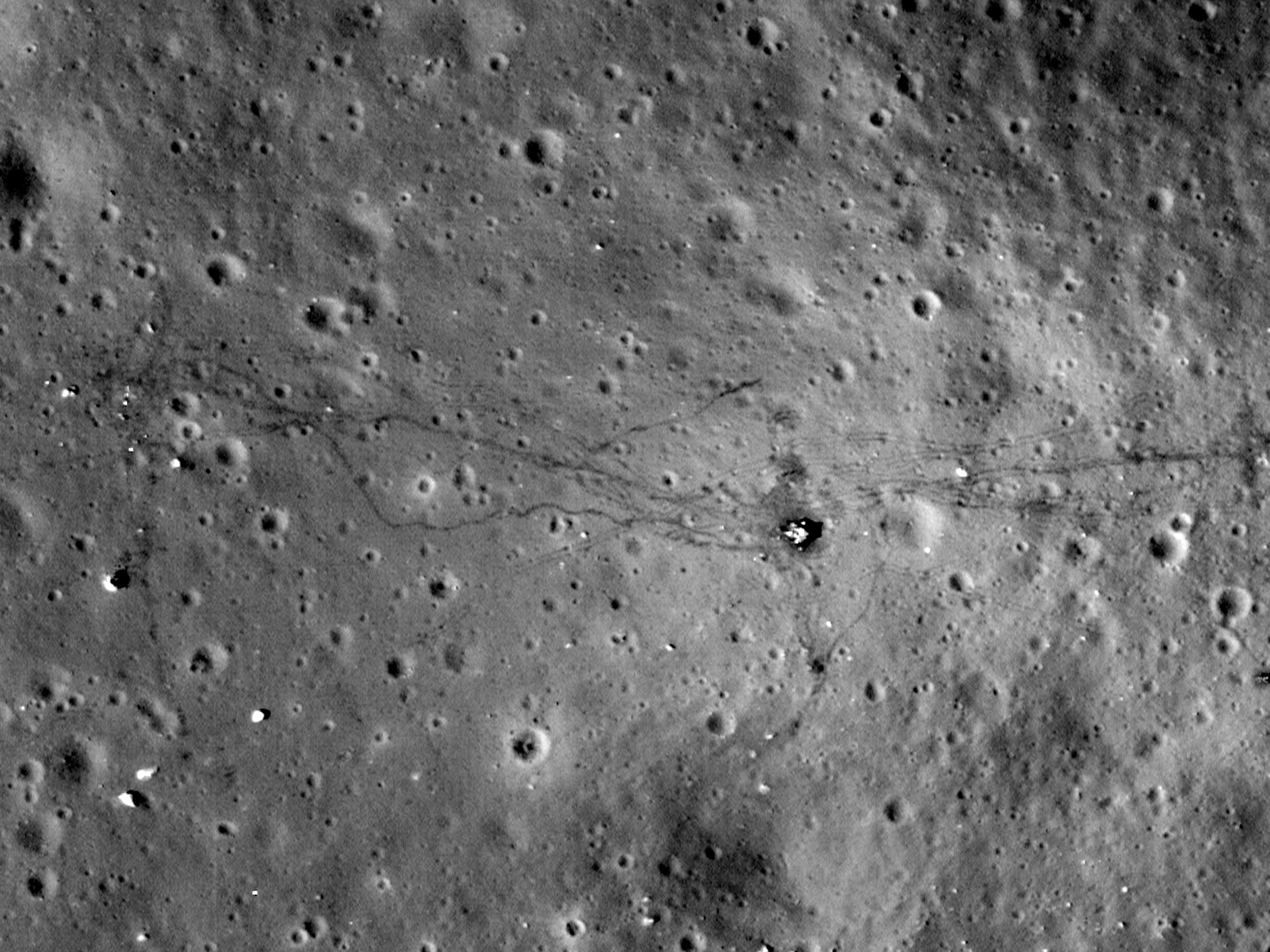 WASHINGTON - A robotic spaceship circling the moon has snapped the sharpest photos ever of the tracks and trash left by Apollo astronauts in visits from 1969 to 1972.

NASA's Lunar Reconnaissance Orbiter got close enough to see the astronauts' path when they walked on the moon. The photos also show ruts left by a moon buggy and even backpacks pitched out of the lunar landers before the U.S. visitors returned to Earth.

The photos were taken two weeks ago from 13 to 15 miles above the moon's surface and show the landing sites for Apollo 12, 14 and 17. These photos offer a sharper look that more clearly distinguishes man-made objects from moon rocks. The closest images are of the Apollo 17 site from 1972, the moon visit.

"The images look very spectacular, as you can see for yourself," Mark Robinson, an Arizona State University, Tempe scientist, who is the principal investigator of LRO's camera, told reporters at a news briefing.

"From a science standpoint, [the images] are important for two reasons," Robinson said. "They tell us something about the photometric properties of the moon - why are they darker? Scientists are working to investigate that question. In a more practical sense, it allows us to find the exact spot where samples were collected."

However, he was less optimistic about finding remains of the flags left behind by various Apollo moon missions, saying that the banners would have fared poorly against a combination of the moon's extremes of hot and cold, not to mention constant ultraviolet radiation.

"If the flags are still there, they're probably in pretty rough shape," he said. /p>

The pictures were taken two weeks ago and show the landing sites for Apollo 12, 14 and 17. The closest images are of the 1972 Apollo 17 site, the last moon mission./p>

Apollo 17 Commander Eugene Cernan wrote in an email to The Associated Press that the photo gives him a chance to revisit those days, "this time with a little nostalgia and disappointment. Nostalgia because those special days are fondly etched in my memory and disappointment because it looks like now we will not be going back within the days I have left on this planet."/p>

Two years ago, images from the same spacecraft from 30 and 60 miles out showed fuzzier images. But this year the orbiter dipped down to take about 300,000 more close-ups. The trails left by the astronauts are clear, but the places where backpacks were discarded, Apollo 17's moon buggy, and the bottom parts of the three lunar landers are blurry. /p>

"You have to really look at it for a long time to figure out what you're looking at," Robinson said. For example, when it comes to the moon buggy he said, "if you squint really hard you can resolve the wheels and that the wheels are slightly turned to the left."/p>

At first, scientists thought they had a bit of a mystery: They saw more stuff than they expected. It turned out to be packing material and an insulation blanket, Robinson said./p>

After 40 years there does not seem to be much moon dust covering the manmade trails. It probably will take about 10 million to 100 million years for dust to cover them, Robinson said./p>

The photos were released a few days after the debut of the new fictional movie "Apollo 18" and before Thursday's planned launch of NASA's twin robotic spaceships to explore the moon's gravity.