NASA has posted a notice on its Web site assuring us that the world won't end in the year 2012, as a new movie would have it. Scientifically valid or not, there's an audience for films such as "2012." Here's our critic David Edelstein:

For some reason we Americans have always relished a good doomsday scenario, but these days there are so many it's hard to keep them straight - deep freezes, aliens, zombie plagues.

In "2012," solar neutrinos microwave the Earth's core, so the crust cracks and oceans rise and billions of people die - and John Cusack tries to get back together with his wife, Amanda Peet.

Yes, it's a Roland Emmerich picture, which means it clunks back and forth between massive videogame-like special effects and "Love Boat"-style sub-plots where different characters try to muster up the courage to express their, you know, feelings.

OK, feelings have a place, even at the end of days; and the theme of holding onto our humanity in the midst of catastrophe is a noble one.

But even though "2012 has a lot of high-flown talk about whether humanity is worth saving if you have to resort to inhuman means, it's a lowdown piece of fear-mongering. It promotes the profitable 2012/doomsday fad, which revolves around the Mayan calendar, polar shifts, and - I'm not making this up - the planet "Nibiru."

There's no reason given for the dying of the Earth in another doomsday film, "The Road." Project on it what you will: The world that's left is all browns and grays - the color green is history. 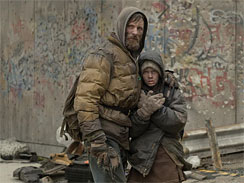 (Dimension Films )
The road of "The Road" is paved with cannibals. It's the mission of Viggo Mortensen as a character called "The Man" to keep his son (called "The Boy") eating, and uneaten.

The movie is based on a novel by Cormac McCarthy, who writes about the age of good men and heroes, now passed. All that's left is blind forward motion on a possibly nowhere road for the sake of a child - the future of the species. The father kills and punishes; the son, the voice of humanism, argues for mercy and compassion.

On its own grueling terms, "The Road" is a triumph, a deeply evocative downer. But it's hard to say, "Go see it!"

Yes, it's a kind of therapy to see our fictional counterparts die in horrible ways, our cities crumble, our deepest anxieties come to pass. But I worry this obsession with apocalypse is turning into a fetish.

It's like we're all so confused about the state of our world, we can't wait to blow it up and start again.