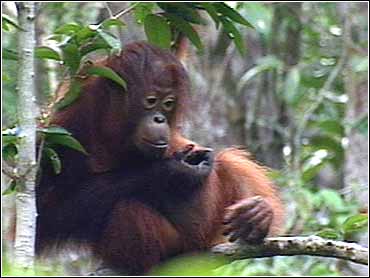 Some orangutan parents teach their offspring to use leaves as napkins. Others say good night with a spluttering, juicy raspberry. And still others get water from a hole by dipping a branch and then licking the leaves.

These are examples, researchers say, that prove the orangutan is a cultured ape, able to learn new living habits and to pass them along to the next generation.

The discovery, reported in a study appearing Friday in the journal Science, suggests that early primates, which include the ancestors of humans, may have developed the ability to invent new behaviors, such as tool use, as early as 14 million years ago. That would be some 6 million years earlier than once believed.

"If the orangutans have culture, then it tells us that the capacity to develop culture is very ancient," says Birute Galdikas, a co-author of the study.

In the march of evolution, "orangutans separated from our ancestors and from the African apes many millions of years ago," she said. The study suggests they may have had culture before they separated, she said.

Culture, in the scientific sense, is the ability to invent new behaviors that are adopted by the population group and are passed along to succeeding generations.

Orangutan culture, while crude by human standards, is culture nonetheless. It developed and is practiced independently by different groups and succeeding generations in the same way that human societies develop and perpetuate unique forms of music, architecture, language, clothing and art.

Galdikas, a researcher at the Orangutan Foundation International, and eight other international primate scientists analyzed years of observations of the shy Southeast Asian orangutan. They concluded that the ape definitely has the ability to adopt and pass along learned behaviors.

The researchers studied results from observations of six widely separated bands of orangutans in Borneo and Sumatra, and found that each group practiced some unique behaviors.

For instance, members of bands in Borneo and Sumatra make a kiss-squeak noise by compressing the lips and drawing in air. Both groups used leaves to amplify the noise, but only members of the Borneo group had discovered they could change the sound by cupping the hands over the mouth. The sounds are apparently used for communicating socially.

The opposite of the kiss-squeak is the raspberry - breath is blown out through compressed lips to make a splattering sound. Only one of the six groups does this habitually and it seems to be related to a bedtime ritual, Galdikas said.

A group in Sumatra has learned to use leaves as gloves when handling spiny fruits. A second Sumatran band has learned the unique skill of getting a drink by dipping a leafy branch into a water-filled tree hole and then licking the moisture from the leaves.

Galdikas said a group in Borneo routinely will force a small tree to the ground, riding it as it falls, and then grabbing nearby forest limbs before crashing to the ground. A group in Sumatra uses the same technique as a defensive maneuver, pushing over tree snags when they feel threatened.

Only a single group of the six has discovered how to use sticks to extract insects from tree holes or to wedge out seeds from fruits. Such tool use is common among chimpanzees, but the Sumatran orangutans band puts a unique twist on the practice - they grip the stick with their teeth instead of their hands.

The dainty use of a napkin has been discovered by one band. Apes in a Borneo band routinely wipe their faces with leaves and parents teach the social skill to their young.

Altogether, the researchers found 24 examples of behaviors that are routinely practiced by at least one of the groups and passed along to new generations. Twelve other behaviors, such as making a pillow with twigs, was seen only rarely or was practiced by only a single individual.

"Developing this culture is indicative that their cognitive level is very high," said Galdikas, who has studied the animals in the wild for 30 years. "Orangutans are as intelligent as chimpanzees and gorillas, but they have a different kind of mentality and personality."

The orangutan is found now only in Southeast Asia, suggesting that their ancestors migrated from Africa, thought to be the continent of origin for primates.

Galdikas said the orangutan is less social than the other primates, living a rather solitary life in the wild. They are slow in movement, not leaping vigorously from limb to limb like chimps or crashing through underbrush like the gorilla.

The loss of habitat in Southeast Asia and other problems have pushed the orangutan toward extinction. Galdikas said 90 percent of the ape population has disappeared in 50 years and there are only 15,000 to 20,000 of the animals left in the wild.