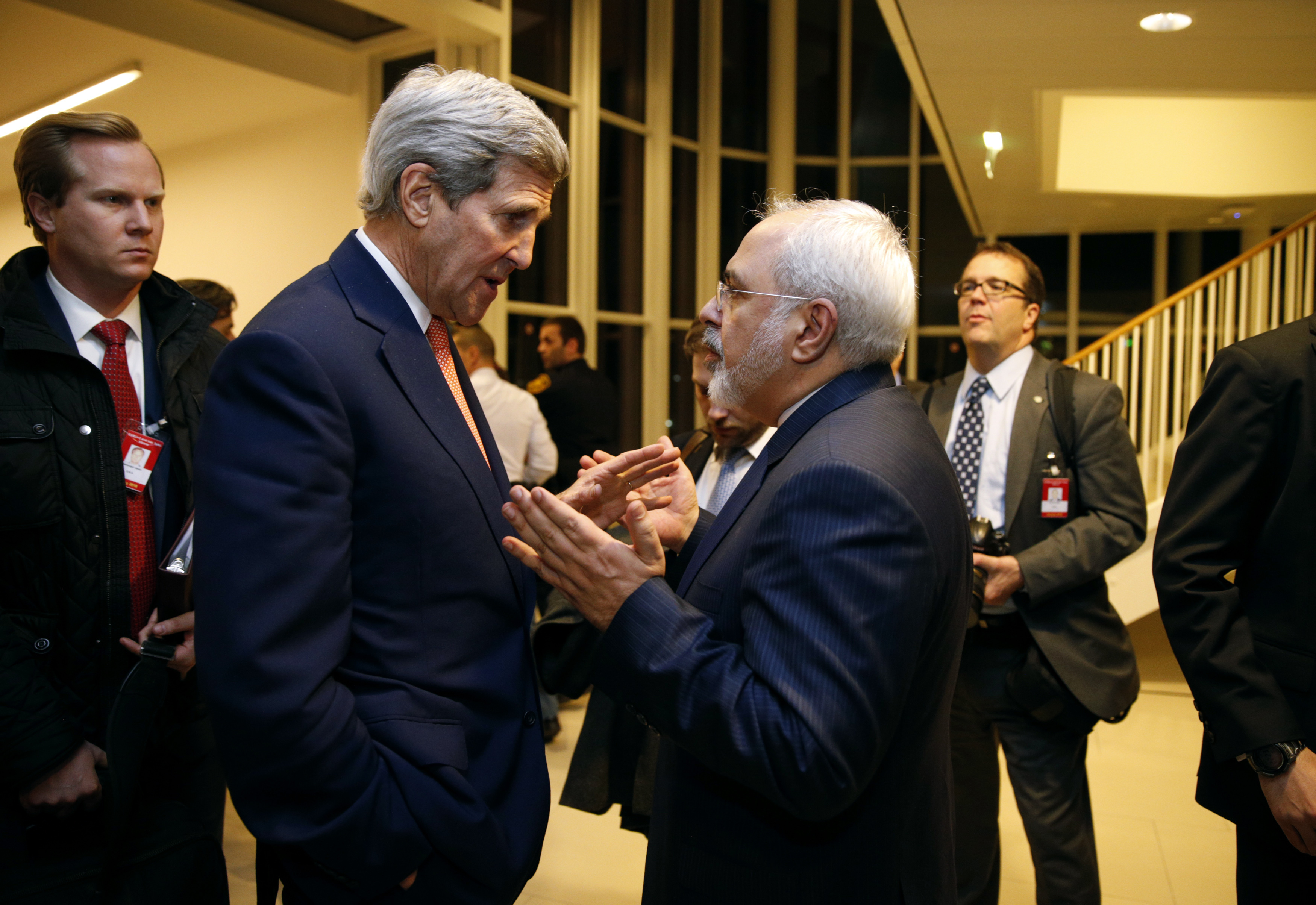 VIENNA -- Key restrictions on Iran's nuclear program imposed under an internationally negotiated deal will start to ease years before the 15-year accord expires, advancing Tehran's ability to build a bomb even before the end the pact, according to a document obtained Monday by The Associated Press.

The document is the only text linked to last year's deal between Iran and six foreign powers that hasn't been made public, although U.S. officials say members of Congress have been able to see it. It was given to the AP by a diplomat whose work has focused on Iran's nuclear program for more than a decade, and its authenticity was confirmed by another diplomat who possesses the same document.

The diplomat who shared the document with the AP described it as an add-on agreement to the nuclear deal. But while formally separate from that accord, he said that it was in effect an integral part of the deal and had been approved by the U.S., Russia, China, Britain, France and Germany, the six powers that negotiated the deal with Tehran.

"There is no secret document or secret deal. As for breakout times after the initial ten years of the deal, we have always been clear about the fact that the breakout period comes down after year ten," said State Dept. deputy spokesperson Mark Toner in a statement. "The prohibition on Iran's pursuit of a nuclear weapon--and our ability to monitor the peaceful nature of its nuclear program--remains in effect indefinitely, however. The breakout time does not go off a cliff nor do we believe that it would be cut in half, to six months, by year 11. The JCPOA ensures that Iran's breakout timeline comes down gradually after year 10, in no small part due to the continued restriction on Iran's stockpile of enriched uranium until year 15."

Details published earlier outline most restraints on Iran's nuclear program meant to reduce the threat that Tehran will turn nuclear activities it says are peaceful to making weapons.

But while some of the constraints extend for 15 years, documents in the public domain are short on details of what happens with Iran's most proliferation-prone nuclear activity - its uranium enrichment - beyond the first 10 years of the agreement.

The document obtained by the AP fills in the gap. It says that as of January 2027 -- 11 years after the deal was implemented -- Iran can start replacing its mainstay centrifuges with thousands of advanced machines.

Centrifuges churn out uranium to levels that can range from use as reactor fuel and for medical and research purposes to much higher levels for the core of a nuclear warhead. From year 11 to 13, says the document, Iran can install centrifuges up to five times as efficient as the 5,060 machines it is now restricted to using.

Those new models will number less than those being used now, ranging between 2,500 and 3,500, depending on their efficiency, according to the document. But because they are more effective, they will allow Iran to enrich at more than twice the rate it is doing now.

The U.S. says the Iran nuclear agreement is tailored to ensure that Iran would need at least 12 months to "break out" and make enough weapons grade uranium for at least one weapon.

But based on a comparison of outputs between the old and newer machines, if the enrichment rate doubles, that breakout time would be reduced to six months, or even less if the efficiency is more than double, a possibility the document allows for.

The document also allows Iran to greatly expand its work with centrifuges that are even more advanced, including large-scale testing in preparation for the deal's expiry 15 years after its implementation on Jan. 18.

A senior U.S. official noted, however, that the limit on the amount of enriched uranium Iran will be allowed to store will remain at 660 pounds for the full 15 years, significantly below the amount needed for a bomb. As well, it will remain restricted to a level used for reactor fuel that is well below weapons grade. Like the diplomats, the official demanded anonymity in exchange for discussing the document.

"We have ensured that Iran's breakout time comes down gradually after year 10 in large part because of restrictions on its uranium stockpile until year 15," the official said. "As for breakout times after the initial 10 years of the deal, the breakout time does not go off a cliff nor do we believe that it would be immediately cut in half, to six months."

The official said the document wasn't made public because it was part of Iran's long-term enrichment plan submitted to the IAEA. Such submissions are confidential, but the text was "closely reviewed" by Washington and the other five powers that negotiated the nuclear deal, said the official.

Still the easing of restrictions on the number and kind of centrifuges means that once the deal expires, Tehran will be positioned to quickly make enough highly enriched uranium to bring up its stockpile to a level that would allow it to make a bomb in half a year, should it choose to do so.

The document doesn't say what happens with enrichment past year 13. That indicates a possible end to all restrictions on the number and kind of centrifuges even while constraints on other, less-proliferation prone nuclear activities remain until year 15.

Iran insists it is not interested in nuclear weapons, and the pact is being closely monitored by the International Atomic Energy Agency. The IAEA says Tehran has essentially kept to its commitments since the agreement was implemented, a little more than six months after Iran and the six powers finalized it on July 14, 2015.

Marking the agreement's anniversary Thursday, President Barack Obama said it has succeeded in rolling back Iran's nuclear program, "avoiding further conflict and making us safer." But opposition from U.S. Republicans could increase with the revelation that Iran's potential breakout time would be more than halved over the last few years of the pact.

Also opposed is Israel, which in the past has threatened to strike Iran if it deems that Tehran is close to making a nuclear weapon. Alluding to that possibility, David Albright, whose Washington-based Institute for Science and International Security is a U.S. government go-to resource on Iran's nuclear program, said the plan outlined in the document "will create a great deal of instability and possibly even lead to war, if regional tensions have not subsided."

The deal provides Iran with sanctions relief in exchange for its nuclear constraints. But before going into recess, U.S. Congress last week approved a bill to impose new sanctions for Tehran's continuing development and testing of ballistic missiles, a program the White House says is meant to carry atomic warheads even if it is not part of the nuclear agreement.

It also approved a measure that calls for prohibiting the Obama administration from buying more of Iran's heavy water, a key component in certain nuclear reactors.

The White House has said removing the country's surplus heavy water denies Tehran access to a material that may be stored for potential nuclear weapons production. But critics note that the purchase was made only after Iran exceeded heavy water limits proscribed by the nuclear deal and assert it rewarded Tehran for violating the agreement.

The one-year mark is an important date to assess what has become of the Iran nuclear deal, CBS News' Pamela Falk reports from the U.N., and although the U.N. report says that Iran gave up 98 percent of its nuclear material and dismantled the required centrifuges, several diplomats feel that the spirit of the agreement has been foiled by Iran's continued missile testing.

Going into the Council meeting, Russia's U.N. Ambassador Vitaly Churkin said he had problems with the U.N. report. He told CBS News: "We have a number of complaints, it [the report] is not helping the process."

He told the Council that the Iran agreement (JCPOA), "is a triumph for multilateral diplomacy, which allows us to solve one of the most difficult of international relations and to do so by peaceful means."

U.S.' U.N. Ambassador Samantha Power also criticized the report for including issues that were not in the mandate of the Council, including missile tests and the possible sale of arms in Yemen, but concluded, "The world is a safer place because of the deal."

The European Union Ambassador to the U.N. Joao Vale de Almeida agreed, "So far all parties have fulfilled their commitments, as confirmed by the two IAEA reports on Iran's nuclear commitments, and by the lifting of the agreed nuclear-related economic and financial sanctions on Implementation Day," but, he cautioned that implementation is still a "work-in-progress." France's Ambassador Francois Delattre added that the international watchdog agency "has continued its activities under Vienna agreement without any impediment."

Speaking to reporters, Israel's Ambassador to the U.N. Danny Danon talked of issues that are not dealt with in the Iran agreement - ballistic missile tests: "This latest missile test proves that Iran continues to act in defiance of the Security Council. The international community cannot bury its head in the sand and make do with words to combat the Iranian threat."