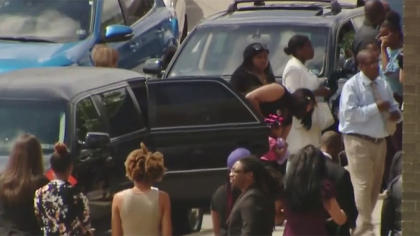 SWISSVALE, Pa. -- Mourners displayed signs reading "Justice for Antwon" and "#SayHisName" in the funeral procession Monday for a black Pennsylvania teenager fatally shot by a white police officer as he fled a traffic stop a week ago. The funeral for 17-year-old Antwon Rose was held in a school in the district he attended near Pittsburgh.

The messages in the windows of some of the cars were the only outward sign of protest after a week of demonstrations calling for the officer who shot Rose to be charged in the shooting. Protesters said there would be no demonstrations Monday out of respect for the family.

Some of the mourners heading into the service at the Woodland Hills Intermediate School wore purple, Rose's favorite color.

The funeral program included a poem Rose wrote just weeks before he was killed. In it, he wrote about being "confused and afraid" and wondering what path his life would take.

"I see mothers bury their sons," he wrote. "I want my mom to never feel that pain."

Rose was an avid skater and skier who also played the saxophone.

Rose was killed Tuesday after police in the town of East Pittsburgh stopped a car officials say matched a vehicle wanted in a shooting in a nearby town. The shooting remains under investigation. No charges have been filed.

The boy's mother, Michelle Kenney, told ABC News in an interview during the weekend that the officer "murdered my son in cold blood."

"If he has a son, I pray his heart never has to hurt the way mine does," Kenney said. "But I think he should pay for taking my son's life."

The case is among several across the country in recent years that have ignited a national debate over race and policing.

Officer Michael Rosfeld, who shot Rose, is on administrative leave. Rose was a passenger in a car pulled over by Rosfeld because police said it matched the description of a car wanted in a shooting in a nearby town.

As Rosfeld was taking the driver into custody, Rose and a second passenger fled. A video taken from a nearby house shows them running from the car.

Three gunshots can be heard, and the passengers can be seen either falling or crouching as they pass between houses. It is unclear from the video if Rosfeld yelled for them to stop.

Lawyers for his family have said no evidence has been produced to show Rose posed a threat to police.

Rosfeld told WTAE-TV last week he could not discuss the shooting but said he was getting a lot of support from law enforcement. He told the station he didn't know there was video of the fatal encounter.

Rosfeld told WTAE he had previously been employed with the Oakmont, Harmer and University of Pittsburgh police departments before joining the East Pittsburgh force. He had been officially sworn in as an officer hours before the shooting.

Rosfeld left his previous job with the University of Pittsburgh police about a month after prosecutors dropped a case against three men he'd filed charges against for allegedly fighting in a bar. Rosfeld, 30, left the university police department on Jan. 18 and was hired by the East Pittsburgh police in mid-May.

A university spokesman wouldn't comment to CBS News on Rosfeld's personnel record, saying the records had been turned over to Allegheny County police, which is investigating the shooting. He confirmed Rosfeld had been employed with the department from 2012 to 2018.

Rosfeld's attorney, Patrick Thomassey, told CBS News on Friday his client is "depressed and feels bad about what happened and that it was his first time ever firing his weapon as a police officer."

Allegheny County police Superintendent Coleman McDonough said the officers did not have body cameras or in-car cameras to record the incident. More than 19,000 people have signed a Change.org petition urging the East Pittsburgh police force to require the use of body cameras.