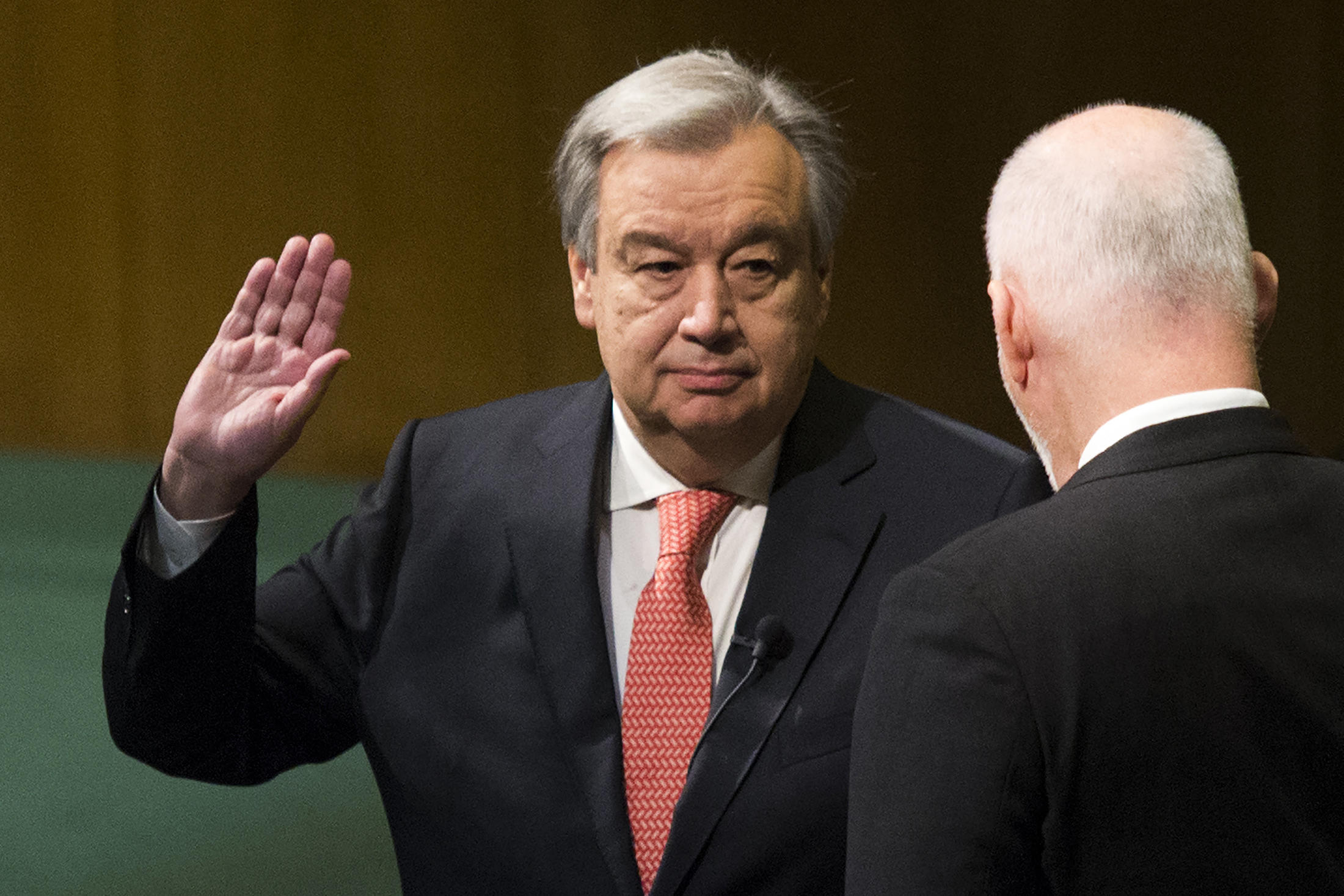 The former U.N. refugee chief was elected to the top job by acclamation in the General Assembly in October. He takes over from Ban Ki-moon on Jan. 1.

Guterres, 67,  performed well in answering questions before assembly members and his executive experience as prime minister and as the U.N. High Commissioner for Refugees from 2005-2015 propelled him to first place among 13 candidates vying for the job in informal polls in the Security Council. After the sixth poll, the council nominated him by acclamation and his name was sent to the assembly for final approval.

After being sworn in by General Assembly President Peter Thomson, Guterres addressed the 193 member nations, saying the world body must work to simplify, decentralize and make more flexible its sprawling bureaucracy.

“It benefits no one if takes nine months to deploy a staff member to the field,” he said. “The United Nations needs to be nimble, efficient and effective. It must focus more on delivery and less on process, more on people and less on bureaucracy.”

Guterres made clear that he intends to make the U.N. more transparent and accountable, and restore confidence in the organization, reports CBS News’ Pamela Falk, from the U.N.

“The United Nations system has not yet done enough to prevent and respond to the appalling crimes of sexual violence and exploitation committed under the U.N. flag against those we are supposed to protect,” Guterres said.

Asked by CBS News how he will shake up the U.N. bureaucracy, Guterres said: “With truth.”

“Guterres is becoming the U.N. secretary general at a moment of extraordinary challenges around the globe. In the United States, Europe and elsewhere, leaders promoting xenophobia, racism and bigotry are gaining power, while atrocities are rampant in Syria, Yemen and South Sudan,” said Louis Charbonneau, U.N. director at Human Rights Watch.

Guterres also said he would send a clear signal that gender parity “from top to bottom” within the organization would be among his first priorities.

The swearing-in came after the 193 General Assembly members paid tribute to Ban, ending with a standing ovation for the native South Korean.

U.S. Ambassador to the U.N. Samantha Power lauded Ban’s accomplishments while in office and said she was confident Guterres is the right person to replace him. “He is the man for the job in such challenging times,” she said.

Charbonneau said rights abuses are abundant around the globe, not just in war zones like Syria. He said Guterres should use his position and authority to “call out rights abuses wherever they occur.”

The selection of a new secretary-general had traditionally been decided behind closed doors by a few powerful countries. But this year, the process involved public discussions with each candidate who was campaigning for the job.

U.N. chiefs are charged with promoting sustainable development, working for peace around the globe, protecting human rights and dealing with humanitarian catastrophes.