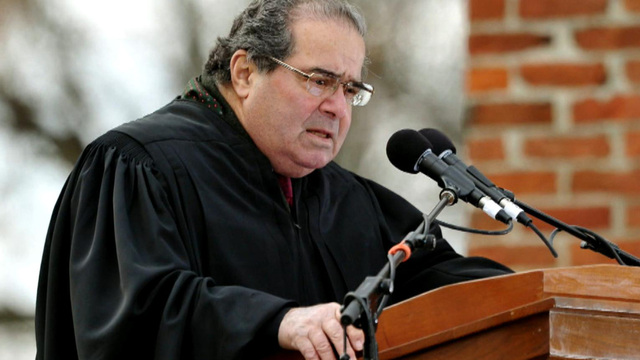 FAIRFAX, Va. — Supreme Court Justice Antonin Scalia’s funeral was attended by thousands and carried on live television, but when the hearse pulled away from the church and headed to his burial site, his family asked for privacy and Supreme Court officials declined to say where Scalia was being laid to rest.

But few things stay private in the internet age, and Scalia’s grave has become public with the help of a website. Within months of his death in February, the location of Scalia’s grave - at Fairfax Memorial Park in Virginia - was recorded on the cemetery website Findagrave.com with precision: Garden of the Crucifixion, Lot 870, Site A. A contributor to the site added photos, too. The spot became even more public recently when Wikipedia, relying on the information from Find A Grave, added the location and a photo to Scalia’s page.

Citing privacy, cemetery President Michael H. Doherty declined to discuss the former justice, who died unexpectedly at the age of 79, or say how frequently visitors ask for help finding Scalia’s gravesite in the cemetery that is dotted with brightly colored artificial flowers and in-ground memorial markers rather than headstones. But the cemetery will direct anyone who asks, its standard practice for any gravesite, though with the information posted online, visitors don’t necessarily need help. When an Associated Press reporter visited recently, a bronze vase that’s part of the justice’s gravesite was empty, though Find A Grave’s pictures from May show fresh flowers.

By far the most justices - a dozen - are buried at Arlington National Cemetery, just over the Potomac River from Washington and just over 3 miles from the Supreme Court building. Former Chief Justice William H. Rehnquist was the last justice to be buried at Arlington, in 2005. The late spouses of Justice Ruth Bader Ginsburg and former Justice John Paul Stevens are also buried there, a clear indication of their plans. Stevens’ headstone already lists the 96-year-old’s name without a day of death. While the cemetery is a military cemetery, not all the justices buried there served.

The fact that Scalia’s family chose Fairfax Memorial Park is not particularly surprising. The family-run cemetery has Catholic roots, and Scalia was a devout Catholic. His son-in-law, Craig Britton Courtney, who died in 2011, is buried there in a plot near Scalia’s. And at the time of Scalia’s death, it was public that his body was taken to Fairfax Memorial Funeral Home, which is on the grounds of the cemetery, after it was flown from Texas, where he died.

Though Scalia may be the most famous of the some 30,000 people buried in the 128-acre cemetery, he is not the only conservative legal heavyweight. Former D.C. Circuit Judge Robert Bork, whose nomination to the Supreme Court was rejected by the Senate because he was seen as too conservative, was buried at the cemetery in 2012.