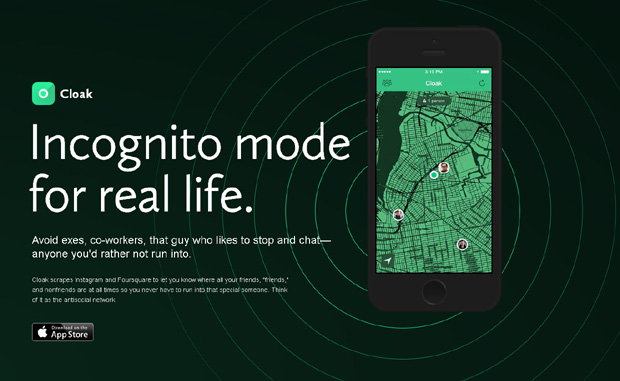 Spending time avoiding someone on social media has always been easier than avoiding them in real life. Not anymore -- thanks to a new app called Cloak.

An "antisocial network," Cloak rounds up users' Foursquare and Instagram geolocation data to help them avoid others that they'd rather not see. According to its App Store page, the company even describes it as an "incognito mode for real life" -- a nod to Google Chrome browser's hidden search function.

The app is the brainchild of programmer/"creative" Brian Moore and former Buzzfeed creative director Chris Baker, according to the Washington Post. Baker appears to be the Internet's resident antisocial network creator with the development of similar antisocial apps, such as Rather -- a plugin that blocks things that a user doesn't want to see on Twitter and Facebook, replacing them with cats -- and Unbaby.me, an extension that replaces baby pictures in your Facebook news feed with cats.

In Cloak, photos of friends are displayed on a map relative to the user's location. Those that are deemed the most undesirable are "flagged" -- that is, alerts will be sent to users' phone when they're nearby -- presumably helping to avoid them forever.

Whether a block away or two miles away, Cloak users can also dictate the app to notify them of the all their friends' -- or just the undesirables' -- locations at a range of distances, allowing them to get a running head start.

However, there is a catch. The undesirables must be avid social media users, checking-in often -- specifically using Foursquare and Instagram. Geolocation data from other social media sites, such as Facebook and Google+, are currently not available, but the company hopes to add more social networks and features in the future. Future services will not include Twitter, as the location data just isn't there, the company says.

The creators of the app insist that this is not just an exaggerated look at the world of social media, but a legitimate need. In the world of mostly pleasant social media updates, "likes," and "fans," people want to be able to not be "friends" -- even to the point of avoiding others completely.

"Personally, I think we've seen the crest of the big social network," Baker told the Washington Post. "Things like Twitter and Facebook are packed elevators where we're all crammed in together...I think anti-social stuff is on the rise. You'll be seeing more and more of these types of projects."

Currently only available through Apple's App Store, the creators hinted at their future plans.

"Right now we're just focusing on iOS. If the app proves to be a hit with users, of course we'll expand the idea...Plus we've got some fun features we'd like to roll out beyond what's included in our launch," the company told Time.com.