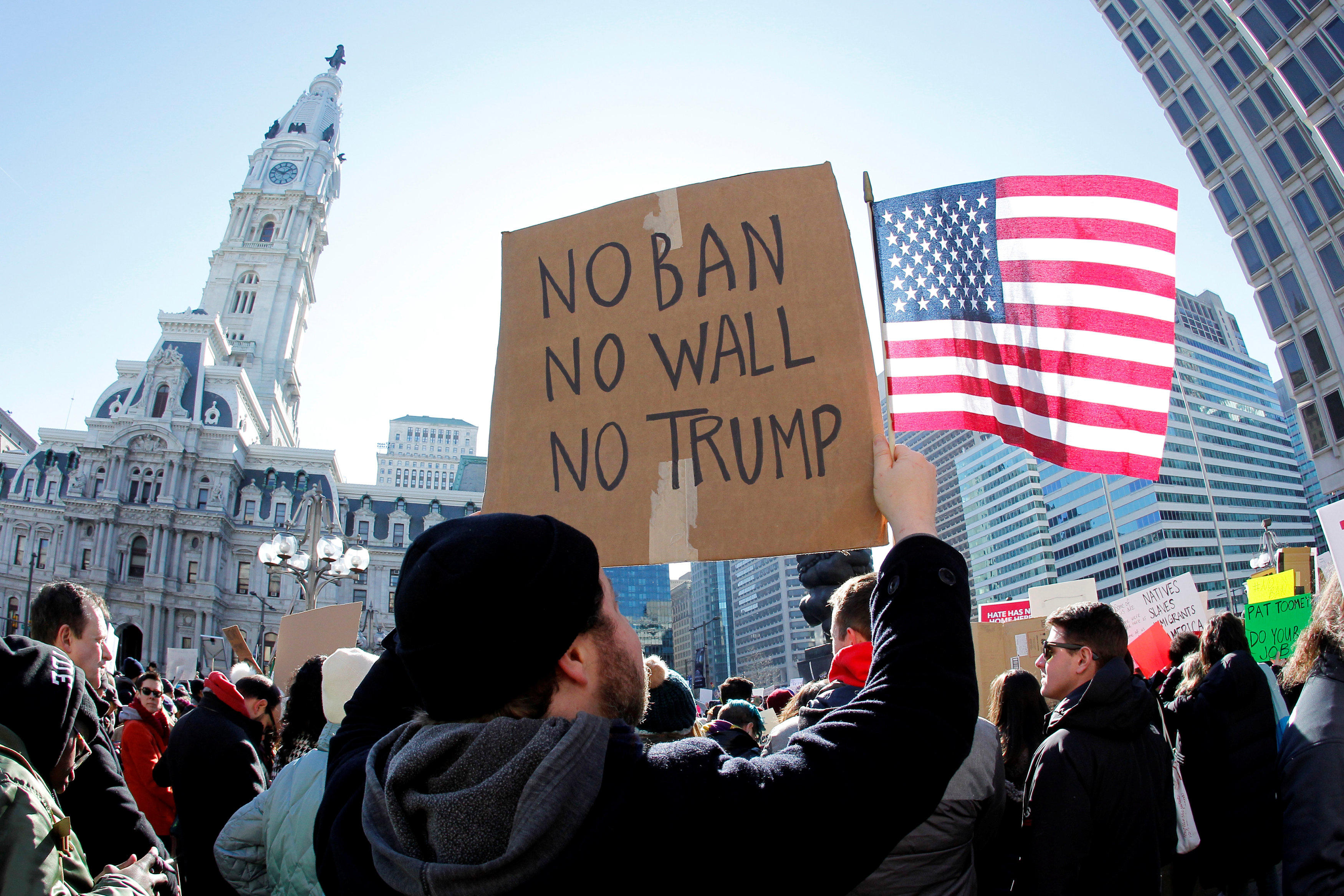 WASHINGTON -- Scrappy as ever, Donald Trump dismisses polls showing low approval ratings as “fake news.” But whatever his opinion, active opposition to his go-it-alone presidency appears to be widening.

From corporate boardrooms to the halls of Congress, Trump is facing an unprecedented effort to disrupt even the most basic of his presidential functions. It’s an evolving, largely grass-roots effort that aims to follow Trump and his potential supporters everywhere they go - and there are early signs that it’s having an impact.

The Trump name alone is enough to spark outrage. There are plans for a mass “mooning” of Trump Tower in Chicago. Boycotts are underway of companies that sell Ivanka Trump’s clothing line or advertise on NBC’s “Celebrity Apprentice,” where Trump has remained an executive producer.

Congressional offices are being flooded with emails, social media messages and calls jamming phone lines. Hundreds of protesters are flocking to town halls and local congressional offices, some in strongly Republican districts, to voice their opposition to Trump’s Cabinet picks, health care plans and refugee restrictions.

The goal, say organizers of some of the efforts, is nothing short of complete resistance. It’s a strategy Democrats say they learned from the success of the tea party movement, which stymied President Barack Obama’s agenda through protests, door-to-door political action campaigns and online activism.

“The lesson from the last eight years is, sadly, that implacable resistance works,” said Rep. Gerry Connolly, D-Va. “Because it’s all about your base, and I will simply point out that our base is bigger than theirs, and it’s riled up.”

Trump and some Republicans shrug it off as sore losers unwilling to accept the results of the election. The president’s core supporters, in states like Iowa and Wisconsin, applaud him as a man of action, delivering on his campaign promises to move quickly and shake up Washington.

Although recent polls show his approval ratings in the 40s, a historic low for a new president, Trump rejects the surveys as false.

“Any negative polls are fake news, just like the CNN, ABC, NBC polls in the election. Sorry, people want border security and extreme vetting,” he tweeted on Monday. “I call my own shots, largely based on an accumulation of data, and everyone knows it.”

Later Monday, Trump renewed his Twitter attacks on The New York Times, slamming the paper “for the poor reporting it did on my election win. Now they are worse!”

Trump’s base is likely to reward him for his actions, say former White House aides, who note that all presidents face opposition and public demonstrations.

It’s only a problem if it lets them stop him from “doing what he seeks to do,” said former George W. Bush spokesman Ari Fleischer, who recalled a travel stop in Portland, Oregon, when protesters threw rocks at the president’s motorcade. “When it comes to policy full speed ahead, the people screaming at you can’t be convinced to be for you in any case.”

But recent presidents never faced the kind of multi-front opposition that Trump is now experiencing so early in their terms.

Last week, he canceled a trip to the Harley-Davidson factory in Milwaukee, where local groups planned to protest his event. The White House said the protests weren’t the cause. And on Saturday, more than 1,000 protesters beat drums, sang and chanted outside the gates of Trump’s Mar-a-Lago resort in Florida, where the president was attending a Red Cross benefit.

The displays of public outrage have been aimed not only at Trump but at lawmakers, world leaders and corporate executives who might be tempted to work with him to pass key parts of his agenda, like replacing the health care law or rewriting trade agreements.

The White House claims to be unimpressed by the protests. In fact, a lot of the demonstrators are simply paid to show up and shout, says Trump Press Secretary Sean Spicer. But that’s just a fantasy, foes say.

“The level of mobilization against Trump is almost like nothing I’ve ever seen before,” said Joe Dinkin, spokesman for the Working Families Party, which coordinates weekly anti-Trump events across the country. “Collaboration with Trump is a path that will bring well-deserved ire.”

Already, there are some signs that the early efforts may be having an impact on his ability to promote his agenda across the globe. On Monday, the speaker of Britain’s House of Commons said he strongly opposes Trump addressing Parliament, making it unlikely he’ll be given the honor during a state visit later this year.

Technology executive Elon Musk spent hours on Twitter over the weekend defending his decision to serve on Trump’s business council. So far, one CEO- Uber’s Travis Kalanick - has quit the group after facing a weeklong rider boycott.

The ACLU saw donations pour in after it sued the government over the refugee ban.

And Republican lawmakers are bracing themselves for an onslaught of rowdy town hall meetings, after congressmen in California and Florida faced raucous crowds last weekend.

“The situation was rapidly escalating into a riot,” said California Rep. Tom McClintock, who had to be extracted by police from an event in downtown Roseville, the population center of his sprawling congressional district. “One thing came through loud and clear: They were not angry at President Trump for breaking any of his promises - they were angry at him for keeping them.”