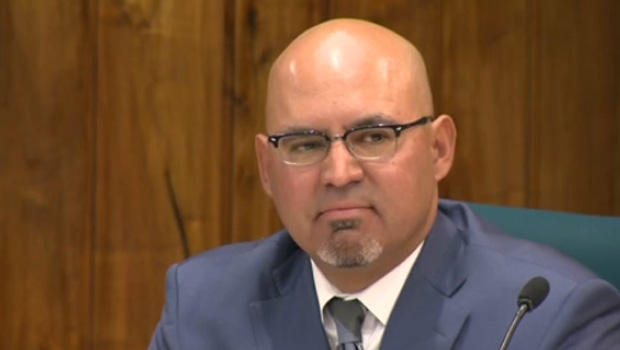 PICO RIVERA, Calif. -- City Council members in a Los Angeles suburb passed a resolution Tuesday night condemning and asking for the resignation of one of their colleagues who in his work as a school teacher called members of the U.S. military "the lowest of our low." "God bless America!" one Pico Rivera councilman shouted as the vote passed.

But Councilman Gregory Salcido, who has been on leave from El Rancho High School in Pico Rivera, gave no indication he would resign from the council.

He's seen on a video scolding a 17-year-old student wearing a U.S. Marine Corps sweatshirt and urging him not to join the military.

"They're not like high-level thinkers, they're not academic people, they're not intellectual people; they're the frickin' lowest of our low," Salcido said on a recording made by a student. "I don't understand why we let the military guys come over here and recruit you at school. We don't let pimps come in the school."

The video was posted to social media and has drawn millions of views, along with outraged comments.

President Trump's chief of staff, John Kelly, said last month in a radio interview that Salcido "ought to go to hell" for his remarks.

Mayor Gustavo Camacho called it "bullying, arrogant and aggressive behavior." The council can't force Salcido from his post but Camacho introduced a motion to censure Salcido, which would bar him from city committees and appointments, and to ask him to resign from the council.

The meeting was Salcido's first public appearance since making the comments Jan. 26.

He said he was sorry to anyone his comments may have hurt, but he did not apologize for the remarks themselves, which he said "were definitely out of context."

Salcido said he was trying to get his students, most of whom are low-income minorities, not to settle for the Army or Navy.

"My goal as it relates to my students is to get them to do everything to get to college," said Salcido, who was shouted down by some angry members of the audience. "I wanted to challenge them to reach their academic potential."

The crowd was so large city officials set up TVs and chairs outside to accommodate everyone who showed up, CBS L.A. reports.

Salcido's comments came after he listened to nearly 50 angry but mostly orderly and calm speakers, many of them veterans. He was mostly stone-faced, CBS L.A. says.

One speaker said, "Do the right thing. Be a man. Stand up. Apologize. And resign," the station notes.

"America: Love it or leave it. That's the bottom line," said Raul Rodriguez, 76, an Army vet and retired warehouse worker from Apple Valley, who wore a camouflage outfit.

Dennis Jackson, 67, who grew up in Pico Rivera, was one of several who said Salcido was abusing his position as a teacher.

"A classroom is a place of learning, not propaganda," Jackson said.

One of his former students spoke on Salcido's behalf.

Eric Gleason, 20, of Pico Rivera, who graduated from El Rancho in 2015, denied that Salcido bullied students. He said Salcido urged students who disagreed with him to "speak from the heart."

"I believe that I probably wouldn't even be here today if it wasn't for him," he said.

Gleason said he bullied throughout school and Salcido helped him.

"I believe he gave me courage to just be myself."

The student who made the video and his family chose not to attend, saying through an attorney that they believed their presence would inflame the situation.

Salcido said he has gotten fairly constant and profane threats via social media and phone calls since the video spread, some saying they were going to kill him and make his son an orphan.

"I am a pacifist," Salcido said. "I am opposed to any sort of violence. If any of you try to do me any harm, I'm not going to fight you."

The mayor and three city council members voted to urge the resignation. Salcido voted against the resolution and a fifth council member abstained, saying the resolution, which is not binding except to bar Salcido from committees and appointments, was pointless.