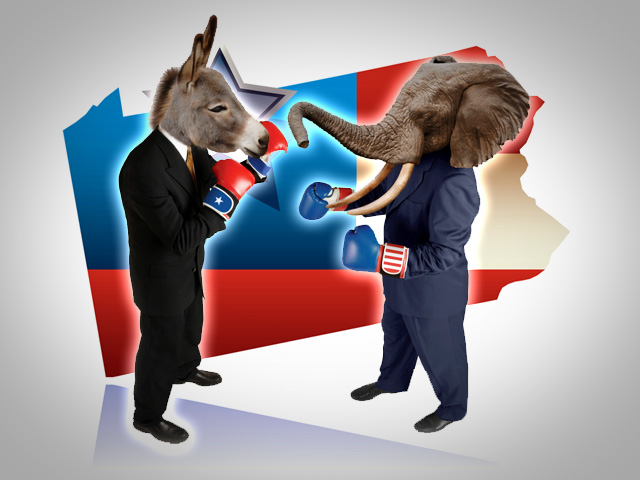 (CBS News) Of the five states holding primaries today, Pennsylvania stands out as a battleground state with the potential to boot the incumbent president come November. It's also a state where on Tuesday, a few congressional incumbents are at risk of losing their seats.

A new Texas-based super PAC, Campaign for Primary Accountability, has set its sights on defeating Rep. Tim Holden, a 10-term Democrat representing Pennsylvania's 17th district. The super PAC has spent nearly $200,000 to challenge Holden -- not because of any specific policies he's supported, but because he's an unpopular incumbent with a viable primary challenger, according to the group.

Campaign for Primary Accountability focuses on ousting House representatives who may have outworn their welcome in the halls of Congress, regardless of their party affiliation. Spokesman Curtis Ellis explained that the super PAC chooses which politicians to target based on a few key criteria: They focus on House districts dominated by one party, look for long-term incumbents, zero in on incumbents who have proven unpopular in polling, and then narrow down their targets to incumbents who face viable challengers.

"Our role is to be the equalizer in these campaigns," Ellis said, arguing that long-term incumbency "is the ultimate super PAC."

While an incumbent can easily get his name in the paper and raise money from Beltway committees, challengers have a harder time breaking through. That's especially true in primaries, in which the dominant political party has no incentive to bring voters to the polls, Ellis said.

His group's goal, he said, is to "help inform voters of the record of the incumbent and the importance of participating in primaries, and in that way give voters a choice and foster more competitive elections." Otherwise, he said, "Nobody is going to tell you you've got to get out and vote in the primary. The smaller the electorate, the easier it is to manipulate the outcome."

Holden is going up against Matt Cartwright, a progressive Democrat who's slammed Holden for taking moderate or conservative positions on issues like hydrofracking, a type of natural gas drilling that has progressives and environmentalists concerned.

Ellis said the race shows that Campaign for Primary Accountability -- whose primary financiers include conservatives like construction mogul Leo Linbeck III and Texas oilman Tim Dunn -- has no ideological motivations.

"It's a matter of public record that many of our donors are from the oil and gas industry," Ellis said. "They don't agree with Matt Cartwright, but they agree voters should have the choice to elect representatives that represent their views, and they believe in competitive elections."

For a while, the Campaign for Primary Accountability was also backing a Pennsylvania primary challenge from the right -- Tea Party candidate Evan Feinberg's race against five-term Republican Rep. Tim Murphy in Pennsylvania's 18th district. Ellis said his organization spent around $80,000 in that primary race, but they've pulled back since Feinberg's own fundraising proved "woefully inadequate," Ellis said.

Still, he said, the two Pennsylvania races gave "a nice symmetrical picture of how we are non-ideological."

Campaign for Primary Accountability, which reported raising more than $645,000 in March, plans to have a role in a handful of upcoming Texas primaries, as well as a primary in North Carolina. So far, the group has had some wins and some losses: It backed the successful effort to defeat Republican Rep. Jean Schmidt in Ohio, but it also failed to unseat 30-year veteran Democrat Marcy Kaptur of Ohio, who prevailed in a challenging primary race against Rep. Dennis Kucinich.

Meanwhile, in the race for Pennsylvania's 12th district, a House incumbent is sure to lose: The race pits Democratic Rep. Jason Altmire against Democratic Rep. Mark Critz. The two incumbents have been forced to run against each other as a result of redistricting after the 2010 census. The race is one of 11 primary races this year in which two incumbents are facing off.

Altmire, first elected in 2006, has led in most of the polls and has a territorial advantage, while Critz, elected in 2010, has the backing of former President Bill Clinton and labor unions.