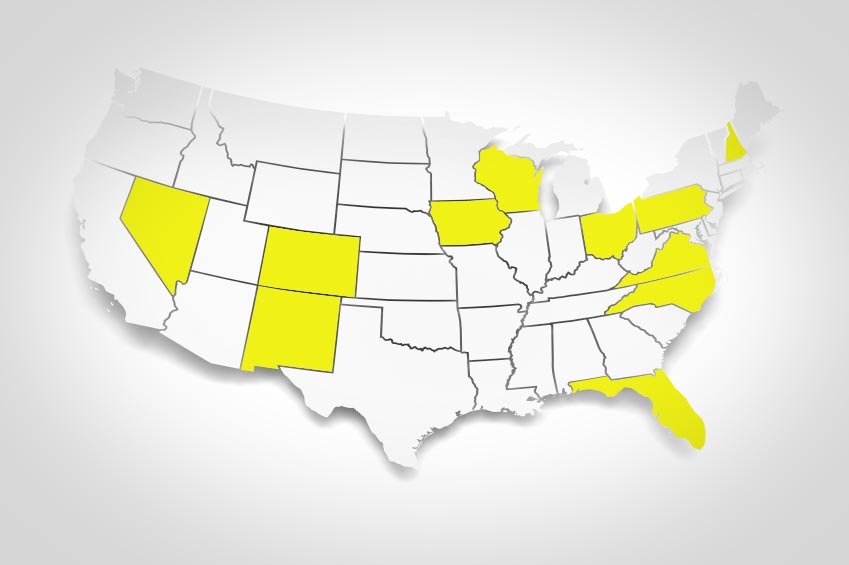 (CBS News) The 2012 election will be decided mainly in a handful of states that President Barack Obama won in 2008. Now he must work to defend them. Part of that is a function of his success four years ago - he won states that Democrats don't often win and won easily in states that are usually closer. Another reason is a reflection of these highly partisan times, where there just isn't that much electoral room for either Romney or Mr. Obama to maneuver. But these are states that do more than just outline the horserace - they cover the whole range of coalitions and groups that will be in play.

Colorado exemplified the shift toward the Democrats in 2008. Mr. Obama carried its upper-income voters, white voters and the suburbanites in Denver's burgeoning metro area and its sizeable number of moderates. These constituencies had previously been more for Bush and the GOP. However, they'll be decisive once again. Seizing on a boom-state's changing demographics, Obama's was also buoyed by younger voters under 45.

The 2010 Senate race here, where an untested Democrat won a tough race against a Tea Party challenger, gave Democrats hope that those moderates can be persuaded to stay in their camp. The Hispanic vote, too, is an important part of the equation, and especially if Romney can make gains among those upper-income suburbanites.

Florida is one of a number of battleground states devastated by the housing slump and slow recovery, and this state could hinge on turnout as much as swing voters. Mr. Obama made widespread, if marginal, gains for Democrats here and was really boosted by strong support from the base, which he'll need again. Mr. Obama won Florida's Hispanic vote (which is not entirely Cuban, but includes a large range of voters with ancestry in Mexico, Central America and Puerto Rico) coupled with the kind of backing from young voters and moderates seen in other states. He also won support in the exurban areas that fueled the states' growth last decade, but who were also among the hardest hit by the bust. Adding to the state's importance, it's worth two more electoral votes than last time.

Organization mattered here in '08, and it was no accident that during the Republican caucuses in January the Obama campaign was on the ground too with their field organization. Its percent of self-identified Democrats, Independents, and Republicans split just about evenly - a great recipe for a swing state. In 2008 Obama carried one in five conservatives here, which included conservative Democrats. It's worth watching if Mitt Romney can cut into that percent. Iowa's electorate is a bit older than the national average and that's certainly a group in play in 2012.

Devastated by the recession and housing crisis, this was a Tea Party hotbed in 2010, and one where the president's approval last year remained well below 50%. The once-booming suburban areas around Las Vegas, with plenty of independents and baby-boomers, have shown swings in recent cycles and could hold the key again. Hispanic voters will, deservedly, be one of the groups getting lots of focus if they are around 15% of the vote again.

A quadrennial battleground that's shown a propensity to change party winners over the last few presidential cycles, it certainly could again, especially as Mitt Romney looks to capitalize on regional appeal from his time in neighboring Massachusetts. New Hampshire famously boasts a large number of independent voters (45%), which is a higher percentage than nationwide, and partisan affiliation runs about even. Unlike states like Ohio and Pennsylvania, there's not a large reliably Democratic urban vote for Mr. Obama. So it's all about the suburbanites and the younger voters under 45 who showed movement here in '08 and again in 2010.

Last presidential election cycle, Democrats greatly outnumbered either Republicans or independents and Mr. Obama won easily. The demographics here have often seemed to be moving in Democrats' favor, but New Mexico has a recent history of being very closely contested in part because many of its Democrats are conservatives and moderates, and the economy is a wild card factor especially among the working- and middle-class voters and smaller urban areas.

The race was razor close in 2008 so Mitt Romney and the GOP are eyeing a recapture. It's no coincidence the Democrats will hold their convention here this summer in an effort to defend it. Mr. Obama used very strong support from African-Americans and younger voters around the cities to offset strong margins for Republican challenger John McCain among white voters and white independents, in particular. But it was also closer than expected across the rural areas, which may give Romney a chance to build bigger margins there this time.

Another Midwestern state that's lost some electoral clout (two fewer electoral votes), its history of switching between the parties will keep it squarely in the spotlight. Its sizeable working-class vote, always sensitive to the economy and the manufacturing sector often draws a lot of focus. (The auto bailout will likely be a key issue here, too.) Also worth watching is that Mr. Obama did well in the suburbs and with college grads. He also received enough upper income voters to stay competitive, and he held down the GOP's margins across the small towns, which are all patterns Romney could, and will need to, reverse.

Pennsylvania is a common state on the battleground list. It is often hard-fought though it hasn't actually swung. Mr. Obama won it easily and it has stayed in the Democratic column since 1992. And this year it'll be worth fewer electoral votes. A win here would be a big pickup for Mitt Romney - to do it, he'd need to roll back Mr. Obama's margins in Philadelphia's more affluent suburbs (2010's midterms offered them hope to do so), appeal to the more conservative voters of western PA, make inroads with the older voters who were a tossup in 2008, and keep the GOP's edge among white working-class voters.

Like nearby North Carolina, Virginia typified the coalition that can make fast-growing southern states competitive. It has expanding suburbs of more-moderate, professional and upper-income voters who trended toward democrats. It also sees large African American turnout and support and relatively good performance in smaller towns. In 2012 watch for all of those facets to be in play again, along with a big Senate race, that will make this a well-trod battleground.

Before 2008 Wisconsin had recently been one of the closest presidential states each cycle, even though Democrats usually managed to squeak out wins. Then Mr. Obama won it comfortably, bolstered by younger voters as well as baby boomers and solid wins among white voters, including working-class whites. Two years later, Wisconsin's voters gave the GOP big senate and statehouse wins; however, a recall effort against the Governor takes place this summer. That will make for a compelling backdrop, with labor and spending issues front and center.

Biden says monkeypox cases something to "be concerned about"
Anthony Salvanto