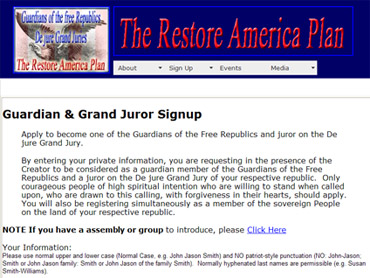 The FBI is warning police across the country that an anti-government group's call to remove governors from office could provoke violence.

The group called the Guardians of the free Republics wants to "restore America" by peacefully dismantling parts of the government, according to its Web site.

Investigators do not see threats of violence in the group's message, but fear the broad call for removing top state officials could lead others to act out violently.

As of Wednesday, more than 30 governors had received letters saying if they don't leave office within three days they will be removed, according to an internal intelligence note by the FBI and the Department of Homeland Security. The note was obtained by The Associated Press.

Orr reports the FBI-DHS advisory uses language including this passage: "...they (the group) advocate for their views through the use, support, or facilitation of violence or illegal conduct..."

One U.S. security official says the advisory was distributed "...out of an abundance of caution to ensure that state and local partners have tools they need to recognize behaviors," Orr reports.

The FBI expects all 50 governors will eventually receive such letters.

Governors whose offices reported receiving the letters included Jennifer Granholm of Michigan, Bobby Jindal of Louisiana, Chet Culver of Iowa, Dave Heineman of Nebraska, Jim Gibbons of Nevada, and Gary Herbert of Utah, where officials stepped up security in response to the letter.

In Nevada, screening machines for visitors and packages were added to the main entrance to the state Capitol as a precaution after Gibbons received one of the letters.

"We're not really overly concerned, but at the same time we don't want to sit back and do nothing and regret it," Deputy Chief of Staff Lynn Hettrick said.

Granholm spokeswoman Liz Boyd said federal authorities had alerted the governor that such a letter might be coming, and it arrived Monday or Tuesday. Boyd, who described the letter as "non-threatening," said it was opened by a staffer and immediately turned over to the Michigan State Police.

Jindal's office confirmed the governor had received one of the letters and directed questions to the Louisiana State Police.

"They called us as they do for any letter that's out of the norm," said Lt. Doug Cain, a state police spokesman.

He declined to provide specifics about the letter, but said, "not knowing the group and the information contained in the letter warranted state police to review it."

The FBI warning comes at a time of heightened attention to far-right extremist groups after the arrest of nine Christian militia members last weekend accused of plotting violence.

In explaining the letters sent to the governors, the intelligence note says officials have no specific knowledge of plans to use violence, but they caution police to be aware in case other individuals interpret the letters "as a justification for violence or other criminal actions."

The FBI associated the letter with "sovereign citizens," most of whom believe they are free from all duties of a U.S. citizen, like paying taxes or needing a government license to drive. A small number of these people are armed and resort to violence, according to the intelligence report.

Last weekend, the FBI conducted raids on suspected members of a Christian militia in the Midwest that was allegedly planning to kill police officers. In the past year, federal agents have seen an increase in "chatter" from an array of domestic extremist groups, which can include radical self-styled militias, white separatists or extreme civil libertarians and sovereign citizens.