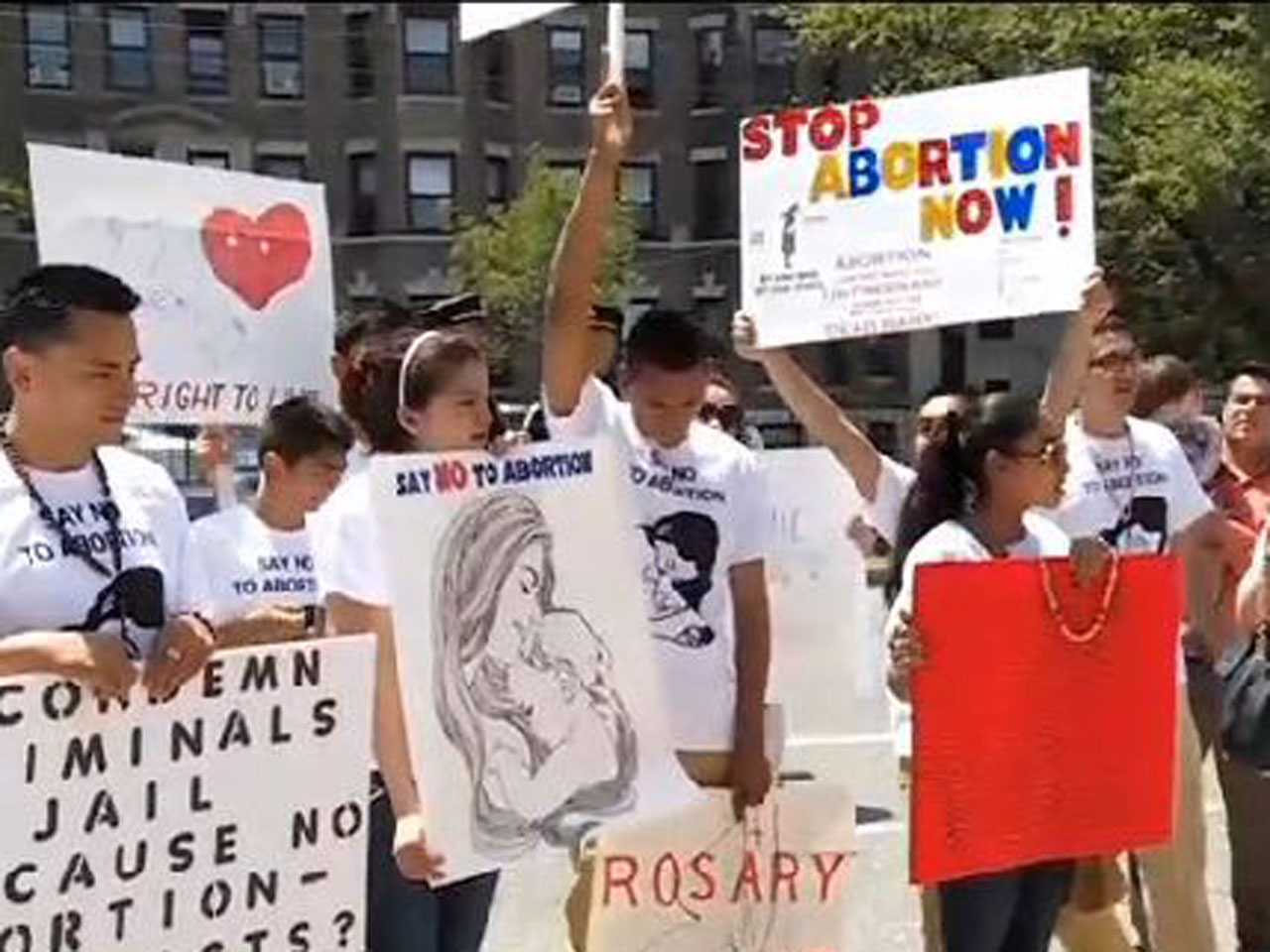 BOSTON - More than 50 protesters gathered outside Planned Parenthood in Boston, Mass., on Saturday to speak out against abortion and - for the first time in years - many set up inside the yellow line on the sidewalk. The line marks the 35-foot buffer zone that the Supreme Court ruled Thursday as unconstitutional.

Anti-abortion activists who say the buffer zone blocks their right to free speech celebrated the ruling.

"This is a public sidewalk," said Ruth Schiavone of Norwood, Mass. "We should be able to talk to each other."

Schiavone, who has been protesting at abortion clinics for 20 years, said being able to speak with women personally - up close - helps her make her message clear without raising her voice.

"I think it's very important to try to talk to her intimately," she said. "We're certainly not harassing or yelling."

The protest Saturday was mostly peaceful - some prayed and sang in groups, others stood silently with signs and a few called after women entering the clinic, but there were moments when tempers flared. Near the end of the protest, which continued for about six hours in ever-increasing heat, a man who openly praised Planned Parenthood yelled at a group of praying protesters, heckling them.

The protesters, a group of about 35 representing the Catholic organization Lazos Mariano, or Bonds of Marian Love, in Everett, Mass., prayed loudly and chanted "no al aborto" or "no to abortion" in return.

The confrontations that occur outside the clinic are what concern Sarah Cyr-Mutty, the community relations coordinator at Planned Parenthood and a volunteer clinic escort for patients. Patients who drive by or see large protests as they walk toward the clinic may decide to forgo appointments, she said.

"That was with the buffer zone," she said. "So it scares me to think about what that'll be like now that [protesters] can be right up in the doorway."

Cyr-Mutty says the buffer zone provided a "safe space" for those entering the clinic, which offers a range of services for both women and men, like testing for sexually transmitted diseases and HIV. She disagreed that the buffer zone limited protester's right to free speech.

About 100 men and women visit Planned Parenthood in Boston on a normal Saturday, though there were noticeably few women entering the clinic on the first Saturday after the Supreme Court's ruling.

"It's really frustrating to see that the right of somebody to get up in somebody's face and partake in that intimidating and harassing behavior trumps somebody's right to access health care that they need," Cyr-Mutty said.

In response to the ruling, Planned Parenthood plans to station additional escorts outside the clinic on weekdays to assist patients. Marty Walz, president and chief executive officer of Planned Parenthood League of Massachusetts, told CBS News that more than 200 people have applied to be escorts since the ruling.

CBS News legal analyst Rikki Klieman says she expects more litigation to follow this decision. Additional court challenges are possible in Massachusetts, but also in other states like Colorado, where a smaller buffer zone law is still in effect.

"This time there's really no winner and no loser," Klieman said. "Ultimately, we're going to see more litigation until there is finally a line drawn one way or the other. We're only going to wind up with an ultimate winner, but not today."