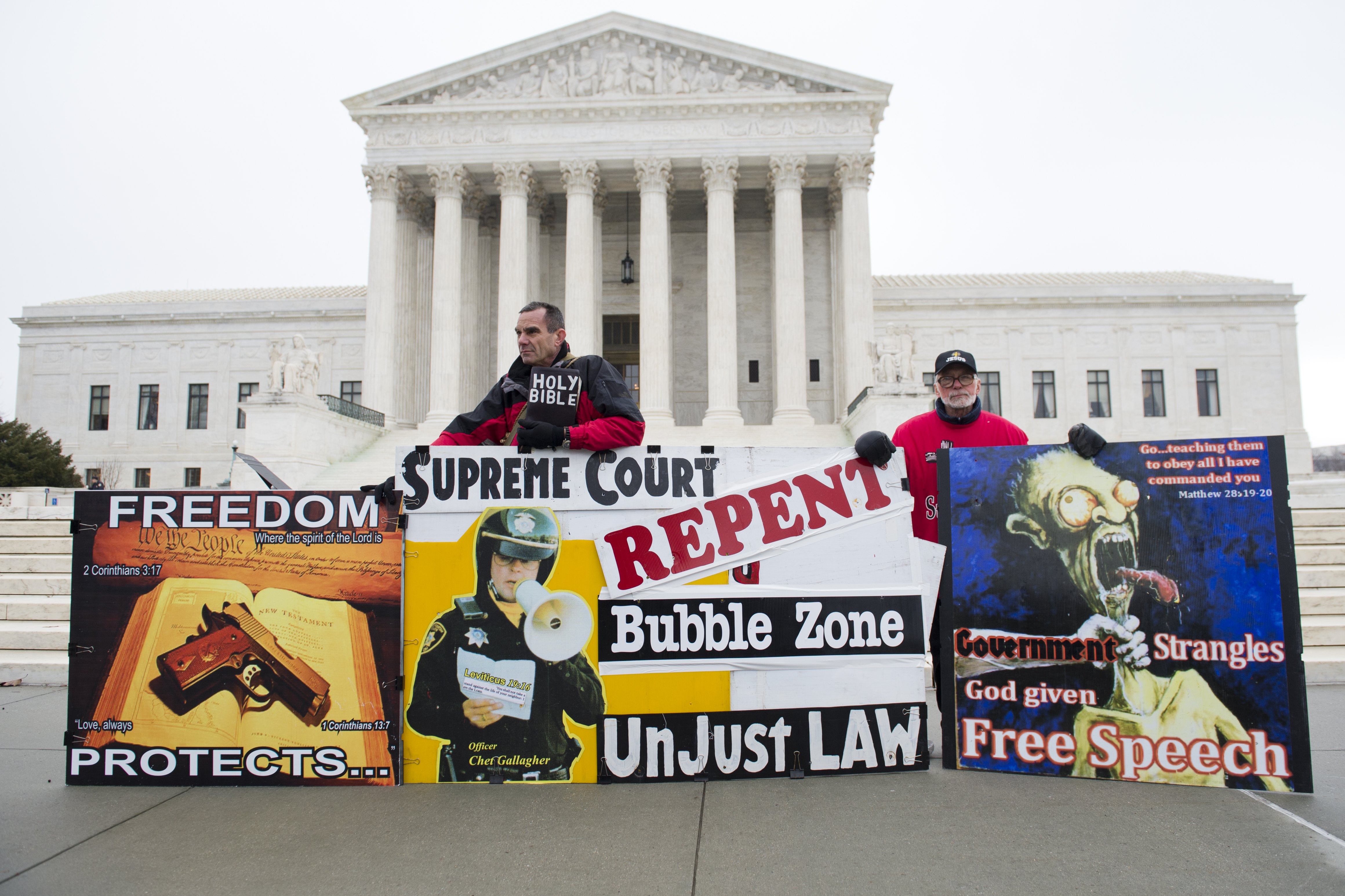 The Supreme Court unanimously ruled on Thursday that a Massachusetts law setting a 35-foot protest-free zone outside abortion clinics violates the First Amendment.

The court in the past has allowed for buffer zones around facilities like health clinics, but Chief Justice John Roberts noted that the Massachusetts law restricts access to sidewalks and other public space. "Such areas occupy a 'special position in terms of First Amendment protec­tion' because of their historic role as sites for discussion and debate," Roberts wrote.

The government is allowed to limit speech in public spaces, so long as there is a significant interest in doing so, and as long as the limits are narrowly tailored and leave open alternative channels for speech. The Massachusetts law did not meet the latter part of those standards, Roberts wrote.

"The buffer zones serve the Commonwealth's legitimate interests in maintaining public safety on streets and sidewalks and in preserving access to adjacent reproductive healthcare facilities," the summary of the ruling says. "At the same time, however, they impose serious burdens on petitioners' speech, depriving them of their two primary methods of communicating with arriving patients: close, personal conversations and distribution of literature."

Moreover, Roberts wrote, the state could have enacted other laws that protect abortion clinic patients without restricting freedom of speech to that extent. "The Commonwealth has not shown that it seriously undertook to address the problem with less intrusive tools readily available to it," the justice wrote.

The case was brought forward by Eleanor McCullen, a woman in her mid-70s, and a group of other anti-abortion rights activists who stand outside of clinics to try to dissuade women from getting abortions.

"They are peaceful, non-confrontational, and do not obstruct access," their brief before the court argued. "Yet, the State prohibits them from entering or standing on large portions of the public sidewalk to proffer leaflets or seek to begin conversations with willing listeners."

The law's defenders, meanwhile, pointed to the its effectiveness at curbing violent and aggressive incidents.

Massachusetts abortion clinics were "routinely blocked" since the late 1980s, the state arguesd in its brief. "Moreover, Massachusetts experienced 'repeated incidents of violence and aggressive behavior' at facilities, including a 1994 shooting in which two employees were killed and several other persons were injured."

The state first attempted a court-approved version of a buffer zone, but it was deemed ineffective, and the state changed the law in 2007. The state points out that protesters can still meaningfully engage with women before they enter the buffer zone -- McCullen herself has testified that since the law was changed in 2007 she's convinced about 80 women not to terminate their pregnancies.

While McCullen may be a sympathetic character, abortion rights advocates argue that she's not representative of the threat to clinic patients and employees. Abortion clinics have been targeted by arsonists, bombers and murderers, they point out.

"There is an intentional and very sinister attempt of the opposition and anti-choice extremists to change the face of clinic protesters from what we know them to be -- the kind of violent people who have threatened the lives of doctors and really go out of their way to intimidate women," NARAL president Ilyse Hogue told reporters earlier this year.