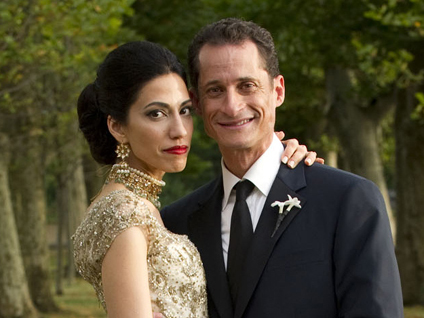 When Rep. Anthony Weiner (D-N.Y.) stepped up to the podium at the Sheraton in New York on Monday, an important figure in his life was conspicuously absent: his wife.

Huma Abedin is a high-profile aide to Secretary of State Hillary Clinton, and the two were married last July by none other than her boss' husband: the former president with more than enough infidelity issues to go around.

Born in Michigan, Abedin reportedly grew up in Saudi Arabia and is fluent in Arabic. She has worked for Hillary for 15 years, starting as intern in the White House. Weiner said she knew about his penchant for flirting with women online but she did not know it was in fact her husband who posted the Twitter photo of his bulging crotch until Monday morning.

According to the New York Times, Bill Clinton joked to Abedin that marrying a politician is not easy because it is "easy to distrust them, whatever their religion."

Abedin may be taking a page from other wives burned by a libidinous politician who did not appear alongside their husbands in the face of scandal. Jenny Sanford, the wife of former South Carolina Governor Mark Sanford, let her husband face the television klieg lights after embarrassing private behavior by himself. The Sanfords later divorced, and it is too early to say what will become of Weiner and Abedin's marriage.

Hillary Clinton famously sat beside her husband on CBS News' "60 Minutes" in 1992, when the presidential candidate faced accusations of marital infidelity. Eliot Spitzer's wife, Silda Wall Spitzer, famously stood by the New York governor when he admitted he had been hiring prostitutes on the side.

But 1992 was two decades ago, and the secretary of state may now be offering Abedin different advice. No one but the two of them knows what takes place in their private conversations, but Hillary certainly has the experience to offer words of wisdom for Abedin, new to life as the wife of a politician in the spotlight for all the wrong reasons.

Will Anthony Weiner be able to keep his seat?
Breitbart: Weiner offering limited version of truth

What's behind the push for a fourth stimulus check
Corbett Daly