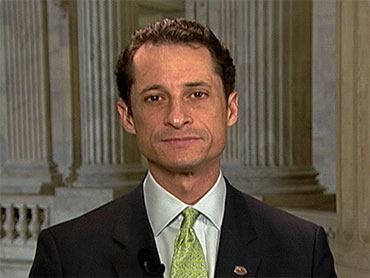 Mr. Obama's tentative deal with Republicans to temporarily extend all of the Bush tax cuts -- even for the wealthiest Americans -- has angered many in the president's party.

The plan would extend tax cuts for the middle class -- which both parties wanted -- but also for the top two percent of income earners, which Democrats have said would cost too much. The package deal also extends unemployment insurance, which pleased Democrats, and it establishes a relatively low rate for the estate tax. Economists largely agree the plan should spur the economy, but liberals maintain the president's concessions to Republicans will not help.

"All those predictions about how much economic growth will be created by this, all of those new jobs, would be created by the things we wanted -- the extension of unemployment insurance and middle class tax cuts," Weiner said. "An estate tax for millionaires adds exactly zero jobs. A tax cut for billionaires -- virtually none."

Weiner said Mr. Obama should have taken his original fight for just an extension of middle class tax cuts directly to the people.

"I see a trend here where the president seems to think his job is to count votes and then try to make a deal," Weiner said. "That's what we in legislatures do." Mr. Obama's job, he said, is to "travel the country, fight for the values that he cares about."

In fact, Mr. Obama did travel the country over the course of the year and often blasted Republicans to large audiences for their interested in cutting taxes for the wealthy.

On ABC's "Good Morning America," Weiner acknowledged those trips but said, "There was a lot of stuff about hope and change, but not a lot of talk about this specific issue."

Weiner and other House Democrats held a contentious meeting on Capitol Hill yesterday with Vice President Joe Biden to talk about the deal. Some congressmen have said that the vice president essentially told them they must "take it or leave it."

Weiner resisted that message. "It depends on whether or not you believe the legislature is here just to back up a deal, good or bad," he said.