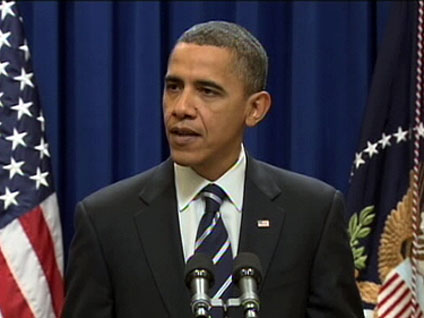 President Obama announced late Monday afternoon that the White House and a group of Republicans have worked out a "framework" to extend the Bush-era tax cuts for all Americans for two years.

He said that while the agreement "was not perfect" it represented "an essential step on the road" to economic recovery.

It was not immediately clear whether there was wide agreement on the proposal, however, which included elements sure to anger both left and right. Top Democrats in Congress have warned such a deal would be too generous to the wealthy, and House Democratic leadership aides told CBS News immediately after the announcement that House Democrats have not signed off on any deal.

Sen. Bernie Sanders, I-VT, said following the announcement that he would "do whatever is necessary to stop a deal that extends tax cuts for the top earners." In a statement, House Majority Leader Harry Reid's office said, "Now that the President has outlined his proposal, Senator Reid plans on discussing it with his caucus tomorrow."

House Republican leader John Boehner, meanwhile, said that Mr. Obama's position on extending the tax cuts was encouraging but added only that "we look forward to discussing this proposal with House Republican Members and the American people."

The deal does appear to have support from Senate Republicans. In a statement, Senate Minority Leader McConnell said, "I appreciate the determined efforts of the President and Vice President in working with Republicans on a bipartisan plan to prevent a tax hike on any American and in creating incentives for economic growth."

But the plan also includes concessions to Democrats, including the extension of unemployment insurance benefits for an additional 13 months.

GOP opposition meant all Americans were at risk of having their taxes increased, he said, a risk he found unacceptable.

"Without a willingness to give on both sides, there's no reason to believe that this stalemate won't continue well into next year," he said, adding: "Make no mistake, allowing taxes to go up on all Americans would have raised taxes by $3,000 for a typical American family and that could cost our economy well over a million jobs."

"I know there's some people in my own party and in the other party who would rather prolong this battle even if we can't reach a compromise," he added. "But I'm not willing to let working families across this country become collateral damage for political warfare here in Washington...So as sympathetic as I am to those who prefer a fight over compromise, as much as the political wisdom may dictate fighting over solving problems, it would be the wrong thing to do."

The plan includes a $120 billion, one-year cut in employees' Social Security taxes that would reduce employee contributions from 6.2 percent to 4.2 percent. The cut in payroll taxes, which is designed to spur hiring, replaces the "Making Work Pay" tax credit in the stimulus bill, which Mr. Obama had wanted extended for another year. Under the plan the Social Security tax would be reduced from 12.4 percent to 10.4 percent overall, since employers pay in 6.2 percent as well.

The White House says that for a family of four making $75,000 per year, the payroll tax cut means a reduction of $1,500 in yearly taxes. An administration officials says this "will have more than twice the economic impact next year as a one-year extension of Making Work Pay." The cut also will be more noticed than the "Making Work Pay" tax credit from the stimulus package, which many Americans did not realize they had received.

The agreement also sets sets the estate tax, which was zero this year, at 35 percent on estate transactions of more than $5 million for the next two years, according to White House sources. (Mr. Obama made clear in his remarks that he opposed that part of the agreement., saying it is "a more generous treatment of the estate tax that i think is wise or warranted.") And it allows business to write off investments next year in an effort to spur job creation.

It maintains the earned income tax credit for low-income families, the child tax credit and the American opportunity tax credit for college, components Mr. Obama hailed as protecting "key tax cuts" for "some of the folks who have been hit hardest by this recession."

"I'm looking forward to working with members of both parties in the coming days to see to it that we get this done before everyone leaves town for the holiday season," Mr. Obama said. "We cannot allow this moment to pass."

He added that "I'm confident that this needs to get done, and I'm confident ultimately that Congress will do the right thing."