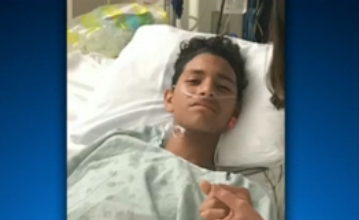 NEW YORK -- A 15-year-old who used his body to block a classroom door during the Valentine's Day mass shooting at Marjory Stoneman Douglas High School in Parkland, Florida, has been released from the hospital. Anthony Borges was hit with five bullets from the gunman's high-powered rifle when classmates say he used his body to block a doorway, preventing the shooter from entering.

After the shooting, Borges was hailed as a hero -- as he fought for his life, CBS Miami reported. A third of his lung had to be removed. One bullet came close to his liver, and three bullets hit his legs in the shooting, which killed 17 people.

"I (thought) I was going to die," Borges said Wednesday, appearing  on NBC's "Today" show.

He doesn't believe he is a hero and feels lucky to be living, Borges told the "Today" show's Kerry Sanders.

NBC reports he had nine surgeries. And since the shooting, Borges has received an influx of letters thanking him for his bravery. Some of the letters, which have come from strangers, were sent from as far as his family's home country, Venezuela.

"The failure of Broward County Public Schools, and of the Principal and School Resource Officer to adequately protect students, and in particular our client, from life-threatening harm were unreasonable, callous and negligent," Arreaza wrote in a notice of intent to sue, according to CBS Miami.