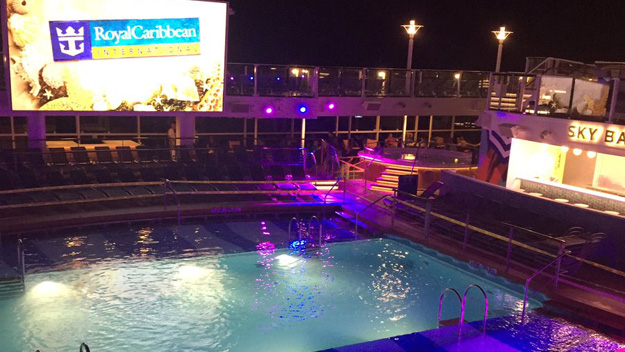 NEW YORK -- A young boy was found unresponsive in a swimming pool on the Anthem of the Seas cruise ship Thursday night, CBS New York reported.

The ship left from a port in Bayonne, New Jersey, earlier in the evening. It was five to ten miles offshore of Breezy Point, Queens, when child was found.

The boy was treated by the ship's medical team, but that was not sufficient, and the ship altered its course and headed back toward Bayonne, according to Royal Caribbean cruises.

The FDNY, the NYPD and the Coast Guard rushed to the ship, and the NYPD lowered medical equipment onto the deck, officials said.

The child was transported to Staten Island University Hospital by helicopter, officials said. A hospital spokesperson told CBS News he was in critical condition late Thursday.

A Royal Caribbean spokeswoman told CBS News the boy is from Maryland, and that the cruise line was "providing support" to his family.

The Anthem of the Seas has run into problems in the past.

In February, the Royal Caribbean cruise ship ran into high winds and rough seas in the Atlantic Ocean , forcing frightened passengers into their cabins overnight as their belongings flew about, waves rose as high as 30 feet, and winds howled outside.

Although no one was injured, and the ship suffered only minor damage, it turned around and sailed back to its home port in New Jersey.

Later that month, another cruise had to be cut short due to storms and a norovirus outbreak.