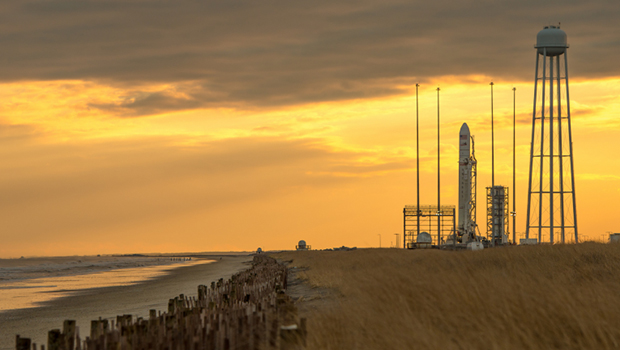 Launch of an Orbital Sciences Antares rocket carrying an unmanned Cygnus cargo ship bound for the International Space Station was scrubbed Wednesday because of high radiation levels in the wake of a major solar flare earlier this week.

Liftoff from Wallops Island, Va., is on hold until at least Thursday pending additional analysis of the space weather environment.

"This is a little bit like global warming, that is, concern about these issues is relatively recent," Antonio Elias, Orbital's executive vice president and chief technical officer, told reporters in a morning teleconference.

"A few years ago, neither ourselves nor others would really bother to look at space weather as a launch constraint," he said. "So this is an enhanced sensitivity that is kind of part of the overall trend in the industry to improve reliability."

The only other launch delay in recent memory that was blamed on space radiation occurred in 2001 when a powerful solar flare prompted mission managers to scrub the launch of an Athena rocket from the Kodiak Launch Center in Alaska.

In a statement, the company said the scrub was ordered "due to an unusually high level of space radiation that exceeded by a considerable margin the constraints imposed on the mission to ensure the rocket's electronic systems are not impacted by a harsh radiation environment."

The flare poses no threat to the Cygnus cargo ship or the ISS's electrical systems, and NASA said the lab's six-man crew was not in any danger.

"I want to emphasize we're looking at a range of particle energies which are of unique interest to launch vehicles," Elias said. "In terms of particles that are of concern to satellites, this is really a non event."

The two-stage Antares rocket had been scheduled for liftoff from the Mid-Atlantic Regional Spaceport at Wallops Island at 1:32 p.m. EST to kick off Orbital's first operational space station resupply mission.

It is the first of seven commercial station cargo flights planned for 2014, three by Orbital Sciences' Antares/Cygnus vehicle and four by SpaceX Falcon 9 rockets and Dragon cargo ships. SpaceX has launched two operational resupply missions to date with a third on tap in late February.

The Cygnus awaiting launch is packed with 3,220 pounds of research equipment, spare parts and crew supplies, including 23 experiments involving more than 8,600 elementary, junior high and high school students in the United States and Canada. Also on board: 33 small "cubesat" satellites and an experiment for students to study how ants behave in the weightless environment of space.

Orbital Sciences will monitor the radiation environment to determine when conditions will permit another launch attempt. If a launch on Thursday is possible, liftoff would be targeted for around 1:07 p.m. The forecast for Thursday calls for a 75-percent chance of acceptable terrestrial weather.

The flare earlier this week originated in a coronal mass ejection above one of the largest sunspots of the past decade.

"Giant sunspot AR1944 is directly facing Earth and crackling with solar flares," Spaceweather.com reported on its website. "Yesterday, Jan. 7th, an X1-class explosion in the sunspot's magnetic canopy hurled a CME in our direction. High-latitude sky watchers should be alert for auroras on Jan. 9th when the cloud is expected to arrive. NOAA forecasters estimate a 60% chance of polar geomagnetic storms."

Satellites typically are equipped with radiation-hardened components that are designed to shield sensitive circuits from the effects of high-energy particles from the sun. But Orbital officials want to make sure the Antares launch vehicle can withstand predicted levels of space radiation without encountering any glitches.

"We are concerned about mission failure," Elias said. "The particles can produce a number of effects -- [integrated circuit] latchups, single-event upsets, [they can] affect memory in some components. And the impacts of those phenomena are different for a satellite that essentially can take its time recovering than a launch vehicle.

"So we're looking at a variety of electronic systems, such as gyros that are installed throughout the rocket, as well as other electronic cards. We're looking essentially at the probability of failure and seeing if the number we come up with is one we would accept to take a risk of launching or not."