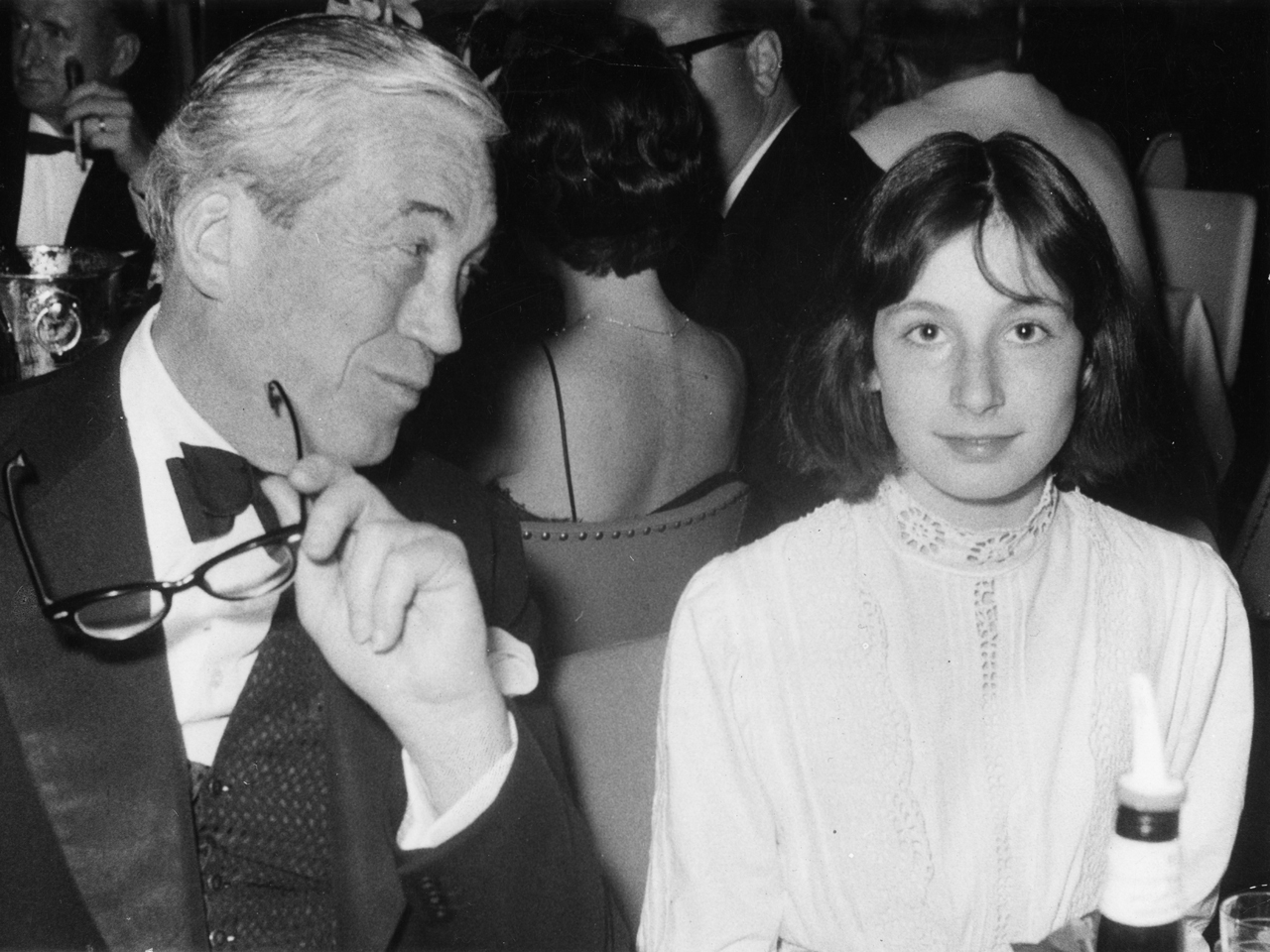 (CBS News) Anjelica Huston is an actress with deep family roots in Hollywood, and quite a few stories to tell. She shares some of them with our Lee Cowan:

The Flying Heart Ranch near California's Sequoia National Park is a quiet, peaceful place. But for actress Anjelica Huston, it can be just as wild here as Hollywood.

"Well, I've got pigs over there, and I've got horses in here, and few little sheep. But it's an 'Old McDonald farm.' It's not a real farm," she laughed.

It was the first place the Academy Award-winner ever bought with her own money -- a retreat she kept to herself.

"I kind of bought it as a secret, and then I kept it a secret," she said.

It's one of the few secrets Anjelica Huston was able to have in her very public life.

At 62, it's a life she's now chronicled in the first of a two-part memoir: "A Story Lately Told," published by CBS' Simon & Schuster.

"If you're going to tell your story, you kind of have to commit to a certain degree of forthrightness," Huston said.

She was born heir to a Hollywood dynasty.

It started with her grandfather, Walter Huston, who won an Oscar for "The Treasure of the Sierra Madre."

It was directed by Anjelica's father, John Huston, who took home an Oscar, too.

Cowan asked Huston, "Growing up, did you feel it was a burden, a family burden?"

"I always liked being a Huston," she replied. "And I always felt like it was my right, and it was my birthright and it was who I was."

Acting is in her blood. In more than 50 movies, she's played some pretty imposing characters -- like her Oscar-nominated role as a con artist in "The Grifters," and the ghoulish Morticia in "The Addams Family."

Her love of acting started early, growing up on a country estate in Ireland. It was the stuff of fairy tales -- riding horses with her father and mingling with his famous friends.

But while her life may have been glamorous, she didn't think SHE was.

"I never felt that I was particularly good-looking," Huston said. "Because I wasn't!"

She grew into her unique looks -- looks she got from her mother, Italian ballerina Ricki Soma.

Ricki was John Huston's fourth wife. When he moved on, Anjelica, her brother Tony, and her mom moved to London, where she grew up a little too fast for her father.

One day he'd had enough.

"He dressed me down and then, he hit me," Anjelica said. "He struck me in the face."

"Back and forward. Yeah. He was a boxer. And I think his anger got away from him."

"Even though he hit you?"

"Even though he hit me. It was the only time."

When Anjelica was 16, John directed her in her first movie, a medieval romance called, "A Walk With Love and Death." He played her uncle.

In a 1987 interview with CBS News, John Huston characterized the experience this way:

"I put her into a picture at the wrong moment. She wasn't all that good in it. It was a big mistake on my part."

"He was right," Anjelica told Cowan. "I wasn't ready to work with him. And he was too tough on me, and it was all too personal."

The critics tore her apart. But the harsh reviews were suddenly replaced by another harsh reality: the death of her mother in a car accident.

"It was like an implosion. A bottom falls out of your life," she said.

"'Cause you guys had been impossibly close, right?"

"VERY close. And my mother was a wonderful, spectacular, joyful creature."

Devastated, she headed for New York. She was soon modeling for the likes of Vogue. She had taken up with well-known fashion photographer Bob Richardson. It was an abusive relationship that lasted four long years, but one she doesn't regret.

She admits she was attracted to bad boys -- one famous one in particular.

Cowan asked, "Do you ever get tired of talking about Jack Nicholson?"

"No, 'cause I never get tired of Jack!" she replied. "It was love at first sight for me."

Not that it was easy living with one of the biggest stars in the world. There were challenges, she says, at every turn.

It was opposite Jack, with her father directing, that Anjelica won her own Oscar for the role of a wise-talking Italian mob mistress in "Prizzi's Honor."

Maerose: "You want to do it, Charley? Is that what you want?"
Charley: "With all the lights on?"
Maerose: "Yeah, right here. On the oriental. With the lights on."

"That was one of the great lines of Richard Condon ever -- You wanna do it?" Huston laughed.

She and Nicholson were together, on and off, for 16 years. Whether they would marry and have a family was a source of constant speculation.

"It's a real pain to always have this kind of Is she or isn't she going to be pregnant? And it puts a lot of pressure on a girl."

"And it was really hard because you did want to have a child," said Cowan.

"I did want to have a child, and worked very hard at it."

Instead, Nicholson fathered a child with actress Rebecca Broussard. In an instant, it was all very publicly -- and very painfully -- over.

"All of a sudden he was as absent as he'd been present in my life, and that was really hard to take," she said.

She's writing about it all now -- in part two of her memoir, out next year. But she says Nicholson has nothing to worry about.

"I think just so long as I don't, you know, drag him through the thistles, I think we'll be fine," Huston said.

"No, I wouldn't dream of it," she said. "Jack doesn't deserve to be dragged through the thistles. I know a lot of people I'd drag through them before I'd drag him."

She found love again. She married famed sculptor Robert Graham in 1992. They were together until he died in 2008.

Again, she dealt with her grief by working, most recently as the Broadway producer in the NBC series, "Smash."

"September Song," featured on the show, was an ode to the Huston family roots. Her grandfather sang it on Broadway in 1938, and it was played at her father's funeral.

She's as proud to be a Huston now as she ever was -- on her terms, with few regrets.

WEB EXTRA VIDEO: Angelica Huston reads an excerpt from her memoir about her father, John Huston. (Click on the video player below.)