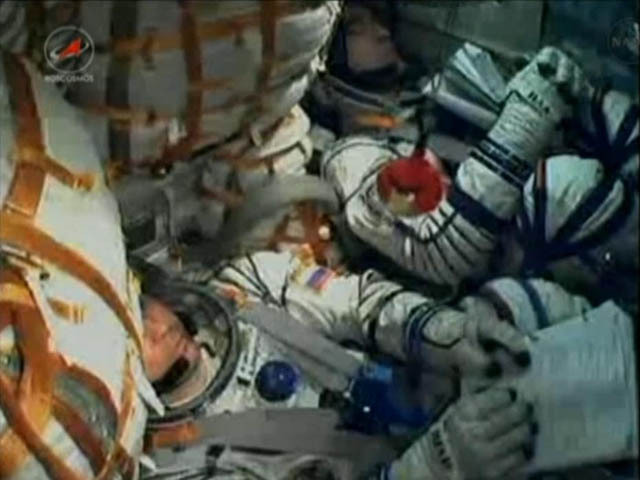 Two Russian cosmonauts, a NASA astronaut and an "Angry Bird" took off for the International Space Station Sunday evening (Nov. 13), soaring through falling snow and setting several historical firsts and lasts in the process.

The Russian Soyuz TMA-22 spacecraft lifted off on top of a Soyuz-U booster from the Baikonur Cosmodrome in the desert steppe of Kazakhstan at 11:14 p.m. EST (0414 GMT Monday, Nov. 14). On board were cosmonauts Anton Shkaplerov and Anatoly Ivanishin, and NASA astronaut Dan Burbank.

Flying with them was a toy red bird from the mobile video game "Angry Birds." Selected by Shkaplerov's 5-year-old daughter, the doll was used by the crew as a "zero gravity indicator." When the small plush bird began to float inside the Soyuz, it signaled to the crew that they had reached orbit.

"Did you already hear that the Red Bird is a crew member on the Soyuz spacecraft?" officials representing the video game developer, Rovio Mobile, said via Twitter. "Greetings from space!"

NASA responded with its own words of welcome.

"Hey @AngryBirds Red Bird, we knew we'd get you to space one way or another," agency officials wrote in a Twitter update. "Looked like a great launch."

The trio (and their bird) will join the space station's Expedition 29 crewmates, commander Michael Fossum and flight engineers Satoshi Furukawa and Sergei Volkov, when their spacecraft docks to the station's Poisk mini-research module at 12:33 a.m. Wednesday, Nov. 16 (0533 GMT).

Since Burbank, Shkaplerov and Ivanishin were originally scheduled to liftoff in September, their time as part of the Expedition 29 crew will be limited to less than a week. Fossum, Furukawa and Volkov, who have been living at the orbiting complex since June, are scheduled to return home on Nov. 21. Before they depart, Fossum will hand over command of the outpost to Burbank, who will lead the station's Expedition 30 mission.

Last of its type

The Soyuz TMA-22 launch also marked the last flight of the TMA-class spacecraft. Since last year, Russia has been phasing in use of "digital" Soyuz TMA-M-class capsules, which have been upgraded to feature modern navigation and control systems.

The first of the TMA vehicles launched to the International Space Station nine years ago in 2002. Like the TMA-M, the TMA superseded an earlier version of the Soyuz — the TM-class — that had been used since 1986.

The Soyuz TMA-22 is the 111th Soyuz spacecraft to fly since the very first Soyuz (simply called "Soyuz 1") launched on April 23, 1967. Almost all of the crewed Soyuz capsules lifted off from the same pad, referred to as "Gagarin's Start," named after the world's first human in space, Yuri Gagarin, who departed Earth from the same launch pad 50 years ago.