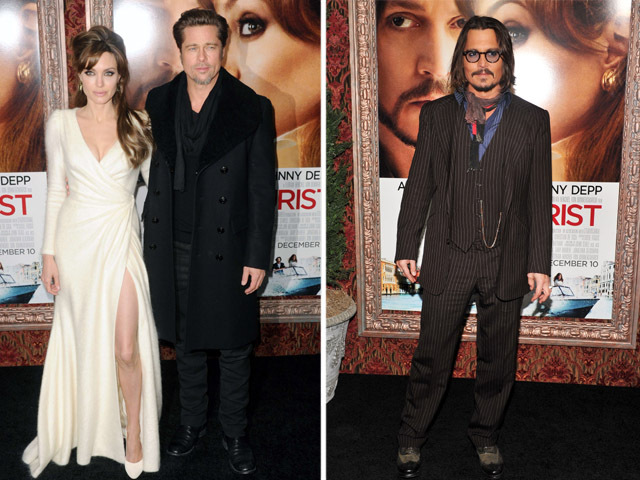 While Pitt, 46, opted for an all black look, Jolie, 35, picked winter white for the event.

The Oscar-winning actress wore a cream colored angora Atlerier Versace gown with a daring thigh-high slit. She completed the look with white suede Ferragamo pumps and a soft half up-do.

Jolie, who recently was bad mouthed by comedienne and Jennifer Aniston friend Chelsea Handler showed off her affection for Pitt as the two kept close on the red carpet.

Depp recently shared his experience of working with Jolie to Vanity Fair and said he was "pleased to find that she is incredibly normal."

"Meeting her and getting to know her was a real pleasant surprise. You don't know what she might be like -- if she has any sense of humor at all," he said, adding, "She has a wonderfully kind of dark, perverse sense of humor."

"The Tourist," which is a remake of the 2005 French film "Anthony Zimmer" and directed by Florian Henckel von Donnersmarck, opens in theaters Dec. 10.