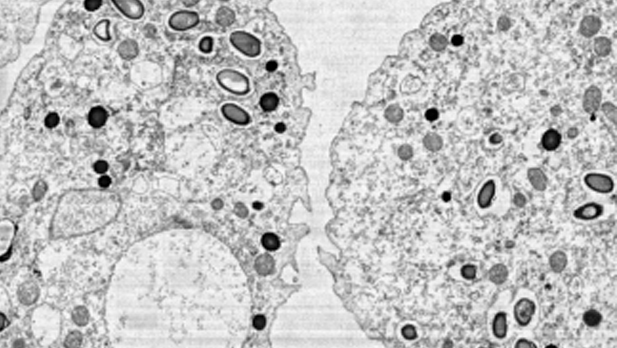 As climate change leads to rapidly melting permafrost in the Russian tundra, a recent find has scientists worried that trouble may be lurking below. A 30,000 year old virus of unprecedented size has been found and reactivated.

The virus, dubbed Pithovirus Sibericum, appears to affect amoebas and not human or mouse cells. Named after the Greek word, "pithos," meaning a large earthenware jar, it was discovered by a group of researchers from Aix-Marseille University.
The virus, which is so large it can be seen under an optical microscope, was found in a 98-foot-deep sample of permafrost near the East Siberia Sea, where the average annual temperature is 7 degrees Fahrenheit, according to the Agence France-Presse.
The group's new discovery raises the frightening possibility that more harmful pathogens could potentially be revived. Perhaps, it could be something no human has ever encountered before, researchers say.
"There is now a non-zero probability that the pathogenic microbes that bothered [ancient human populations] could be revived, and most likely infect us as well," study co-author Jean-Michel Claverie, a bioinformatics researcher at Aix-Marseille University in France, told LiveScience in an email. "Those pathogens could be banal bacteria (curable with antibiotics) or resistant bacteria or nasty viruses. If they have been extinct for a long time, then our immune system is no longer prepared to respond to them."
As oil and mining companies begin to drill in these now thawing areas, some scientists -- like Claverie -- are worried that diseases that once plagued both Neanderthals and humans could become active again and infect their modern-day counterparts. Others are less concerned.
"We are inundated by millions of viruses as we move through our everyday life," said Curtis Suttle, a marine virologist at the University of British Columbia in Canada, who was not involved in the study told LiveScience. "Every time we swim in the sea, we swallow about a billion viruses and inhale many thousands every day. It is true that viruses will be archived in permafrost and glacial ice, but the probability that viral pathogens of humans are abundant enough, and would circulate extensively enough to affect human health, stretches scientific rationality to the breaking point."
"I would be much more concerned about the hundreds of millions of people that will be displaced by rising sea levels than the risk of being exposed to pathogens from melting permafrost."
The study was published March 3 in the journal Proceedings of the National Academy of Sciences.

These are the most stressful tech workplaces
Thanks for reading CBS NEWS.
Create your free account or log in
for more features.
View CBS News In
CBS News App Open
Chrome Safari Continue
Be the first to know
Get browser notifications for breaking news, live events, and exclusive reporting.