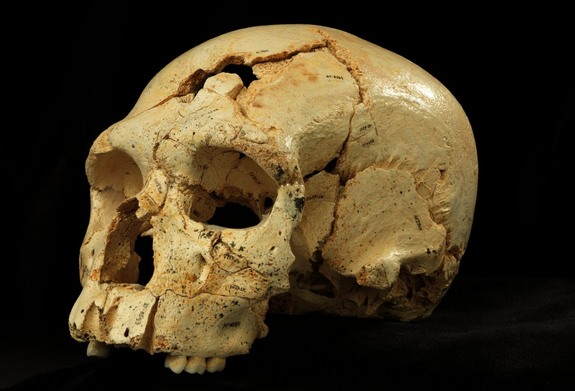 A key first step in Neanderthal evolution may have been the development of front teeth that could act like a "third hand," researchers now say.

These new findings are based on 17 hominin skulls showing a mix of traits from Neanderthals and more primitive human lineages, dating back some 430,000 years. The specimens likely belonged to a hominin group within the Neanderthal lineage but perhaps not direct Neanderthal ancestors. (Hominins include modern humans and extinct ancestors and close relatives of the human lineage.)

The mix of traits suggests the defining features of the Neanderthal body may have evolved separately in stages instead of evolving together gradually, scientists added.

These findings also reveal that, evolutionarily speaking, "Neanderthals have very deep roots, as deep as 430,000 years," lead study author Juan-Luis Arsuaga, a paleontologist at and director of the Joint Center for Evolution and Human Behavior in Madrid, told Live Science. "Modern humans, on the contrary, have roots only 200,000 years deep. It seems that modern humans evolved later." [See Photos of the Hominin Fossils and Spanish Cave Site]

Modern humans, Homo sapiens, are the only living members of the human lineage, Homo. Scientists think that lineage arose in Africa about 2 million years ago, relatively soon after the beginning of the ice age, also known as the Pleistocene Epoch. The closest-known extinct relatives of modern humans were the Neanderthals, who lived in Europe and Asia until they disappeared about 40,000 years ago.

About 400,000 to 500,000 years ago, in the heart of the Pleistocene, archaic humans split off from other groups living during that period in Africa and East Asia; these archaic humans settled in Eurasia, where they evolved characteristics that would come to define the Neanderthal lineage. Later, between about 100,000 to 200,000 years ago, modern humans evolved in Africa.

Still, Neanderthals remained closely related enough with modern humans for the two to interbreed -- in fact, about 1.5 to 2.1 percent of the DNA of any modern human outside Africa is Neanderthal in origin. Recent findings revealed thatNeanderthals interbred with ancestors of modern humans when modern humans began spreading out of Africa perhaps about 40,000 to 80,000 years ago. However, some research suggests the migration began earlier.

How to make a Neanderthal

It has remained uncertain why the physical form of Neanderthals diverged so much from that of other human groups over a relatively short amount of time.

"For decades, the nature of the evolutionary process that gave rise to Neanderthals has been discussed," study co-author Ignacio Martinez at the University of Alcalá in Spain said in a statement. "An important question in these debates was whether the 'Neanderthalization process' involved all regions of the skull from the beginning, or if, on the contrary, there were various stages in this process that affected different parts of the skull at different times."

To help solve the mystery of how Neanderthals evolved, scientists analyzed fossils unearthed from the Sima de los Huesosor "Pit of Bones," an underground cave in the Atapuerca Mountains in northern Spain. The pit lies about 100 feet (30 meters) below the surface, at the bottom of a 42-foot (13 m) vertical shaft. Researchers suggest the bones there may have been washed into the cave by rain or floods, or possibly even intentionally buried there. [See Photos of Other Fossils Found in Sima de los Huesos Cave]

Researchers first discovered human fossils in the cave in 1976, and have continuously excavated at the site since 1984. "After 30 years, we have recovered nearly 7,000 human fossils corresponding to all skeletal regions of at least 28 individuals," Martinez said in a statement. "This extraordinary collection includes 17 fragmentary skulls, many of which are very complete."

The Sima fossils could provide a key snapshot of what the skulls of archaic humans in Europe were like during the early stages of the Neanderthal lineage.

"The finding of 17 generally very complete skulls is in itself one of the greatest discoveries in paleoanthropology ever," Arsuaga said.

These ancient skulls displayed a mix of Neanderthal and more primitive traits. This "mosaic pattern" of traits seen in the Sima fossils suggests Neanderthals evolved their defining features in stages at different times, not with gradual, steady changes happening together over the entire skull.

Critically, many of the Neanderthal-like features in the Sima fossils were related to chewing. "It seems these modifications had to do with an intensive use of the frontal teeth," Arsuaga said in a statement. "The incisors show a great wear, as if they had been used as a 'third hand,' typical of Neanderthals."

All in all, the physical features of the Sima fossils suggest these hominins were part of the Neanderthal lineage, "although not necessarily direct ancestors to the classic Neanderthals," Arsuaga said in a statement. Indeed, other ancient humans in Europe from the Middle Pleistocene do not exhibit the suite of Neanderthal-like features seen in the Sima fossils, suggesting more than one evolutionary lineage appears to have coexisted on that continent at the time.

Extreme variations in climate during the Pleistocene may explain why the physical form of the Neanderthal lineage diverged so quickly from that of other human groups. Those environmental changes led to glaciers and other barriers that separated human groups from each other, and this isolation may have driven the groups to genetically diverge, the scientists noted.

The scientists detailed their findings in the June 20 issue of the journal Science.

Copyright 2014 LiveScience, a TechMediaNetwork company. All rights reserved. This material may not be published, broadcast, rewritten or redistributed.166.70.35.140