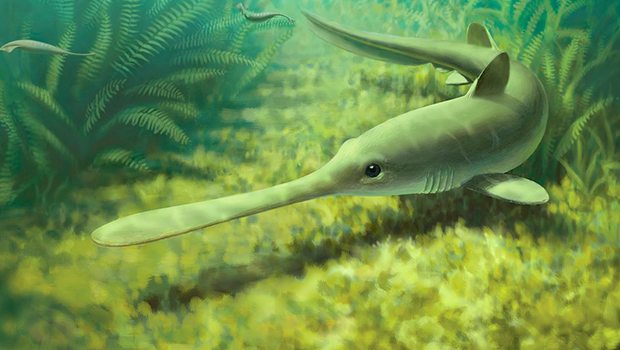 Stunningly preserved baby sharks with bizarre, long snouts — as well as egg cases from the same species — may be the oldest convincing evidence of an ancient shark nursery.

The fossils date to about 310 million years ago.

In unpublished work on egg casings found in Germany, paleontologists have inferred the presence of another ancient shark nursery that is 330 million years old, but "this is the first time we have eggs and fossilized hatchlings in the same place, proving it's a shark nursery," said study co-author Lauren Sallan, a paleontologist at the University of Michigan, Ann Arbor.

The new research, detailed Tuesday (Jan. 7) in the Journal of Vertebrate Paleontology, also revealed that even back then, the sharks, known as Bandringas, migrated to spawn. [8 Weird Facts About Sharks]

The study also revealed new details about the oddball creature's anatomy, including a long snout studded with electrical receptors and spines on its head and cheeks.

The Bandringa fossils were discovered in a coal mine in Mazon Creek, Ill., in 1969. The primitive sharks— which had long, spoon-shaped snouts — started out as babies measuring just 4 to 6 inches (10 to 15 centimeters) long and eventually grew to be about 10 feet (3 meters) long.

Over time, researchers discovered many other fossils that looked somewhat different from the Mazon Creek specimens, and concluded they were two separate species of Bandringa.

But Sallan and co-author Michael Coates, a biologist at the University of Chicago, went back to museum collections to take a second look at 24 of these fossils. They found that all of the shark fossils were the same species, but the marine samples had preserved the bone, whereas the freshwater samples had preserved soft tissue and cartilage, making them look somewhat different.

About 300 million years ago, much of the area that makes up the present-day midwestern United States was covered by a vast inland sea. The sharks probably laid their eggs along the shoreline of that sea, in present-day Illinois, and when the hatchlings matured, they made their way through a network of rivers to a giant freshwater basin farther east, she said.

Some of the specimens' scaly skin was preserved, as was pigment from the iris of the eye, Sallan said.

By combining the detail found in both the soft tissue and the bone, the team was also able to learn new details about the strange creature's anatomy.

"It has these giant, needlelike spines on the top of its head and cheeks," probably to defend against other predators living above it, Sallan told LiveScience.

The new study also revealed that the Bandringas' snouts were studded with tiny receptors. The bottom-feeders used these receptors to sense the electrical activity of prey in the murky shoreline waters, and then used their vacuumlike mouths to suction up those prey, the studied showed.

Except for examples such as mating insects frozen in time, it's very difficult to infer the behavior of long-dead species.

But the careful work provides "convincing evidence to support the hypothesis that these rocks preserve a shark nursery from 300 million years ago," Mark Purnell, a paleobiologist at the University of Leicester in England, who was not involved in the study, wrote in an email.

But not everyone is fully convinced that the findings are evidence of nurseries and shark migration.

"The arguments are cogently presented, but they should be treated cautiously," said John Maisey, a paleontologist at the American Museum of Natural History in New York who was not involved in the study.

For instance, sharks of all ages may have lived in all of these environments, but certain environments may simply have preserved the soft tissue of baby animals better, whereas others could have made whole-body preservation of adults more likely, Maisey said.