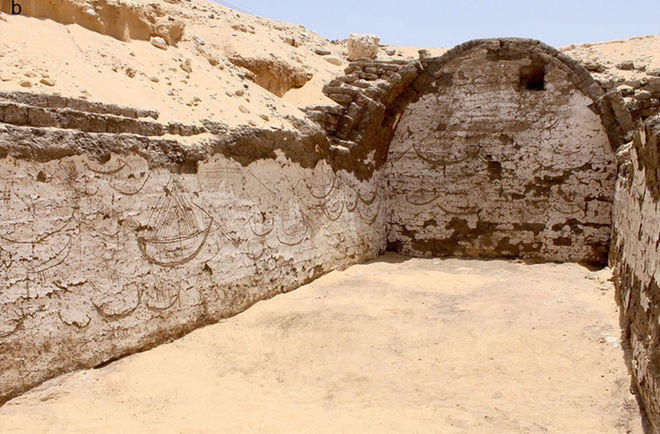 More than 120 images of ancient Egyptian boats have been discovered adorning the inside of a building in Abydos, Egypt. The building dates back more than 3,800 years and was built near the tomb of pharaoh Senwosret III, archaeologists reported.

The tableau, as the series of images is called, would have looked upon a real wooden boat said Josef Wegner, a curator at the Penn Museum at the University of Pennsylvania, who led the excavation. Only a few planks remain of the wooden boat, which would have been constructed at Abydos or dragged across the desert, Wegner said. In ancient Egypt, boats were sometimes buried near a pharaoh’s tomb.  [In Photos: Tomb Painting Discovered Near Great Pyramid of Giza]

Etchings and a boat

Archaeologists found that the tableau was incised on the white plaster walls of the building.

The largest images are nearly 5 feet in length and show “large, well-rendered boats depicted with masts, sails, rigging, deckhouses/cabins, rudders, oars and in some cases rowers,” wrote Wegner in an article published in the International Journal of Nautical Archaeology. Some images are small and simple, the smallest reaching only about 4 inches in length, wrote Wegner.

Though 120 boat images survive today, there would have been more incised on the building walls in ancient times, Wegner wrote. In addition to the boats, the tableau contains incised images of gazelle, cattle and flowers, he noted.

Near the entranceway of the building — whose interior is about 68 feet by 13 feet — archaeologists discovered more than 145 pottery vessels, many of which are buried with their necks facing toward the building’s entrance. “The vessels are necked, liquid-storage jars, usually termed ‘beer jars’ although probably used for storage and transport of a variety of liquids,” wrote Wegner in the journal article.The existence of the building was first noted in a 1904 report by an Egypt Exploration Fund (EEF) team that worked at Abydos between 1901 and 1903. However, that team didn’t have time to excavate the building and didn’t know what was in it; “they came down on the very top of the boat building. They saw the vault of it but abandoned work,” Wegner said.

The discoveries leave archaeologists with a series of mysteries that future excavations may help solve. [7 Amazing Archaeological Discoveries from Egypt]

The archaeologists don’t know who drew the tableau or why they created it. “We can’t conclusively answer that on the basis of what’s preserved,” Wegner told Live Science. However, the researchers think multiple people created the tableau within a short period of time, he added.

Archaeologists are also puzzled over the purpose of all the pottery found near the entrance of the building. It’s possible that those attending a funerary ceremony could have spilled liquid from the pots on the ground on purpose. “Potentially a massive decanting of liquid, likely predominantly water, at the entrance of the building was a way of magically floating the boat,” Wegner wrote in the paper. The boat would not have been literally floated if this ceremony took place.

Another possibility is that the wooden boat was transported on a wooden sledge across the desert. In that case, “water and other liquids may have been used to lubricate and solidify the ground along the path of the boat as it was pulled from the floodplain to its desert resting place,” wrote Wegner, adding that “the ceramic vessels used in this journey may themselves have taken on a ritual significance, and both boat and jars were then buried together as ceremonial interment of objects associated with royal mortuary rites.”

The team plans to carry out excavations in the future that may help solve the various mysteries, he said.

Wegner’s team, in cooperation with Egypt’s Ministry of State for Antiquities, carried out the excavations of the building between 2014 and 2016.