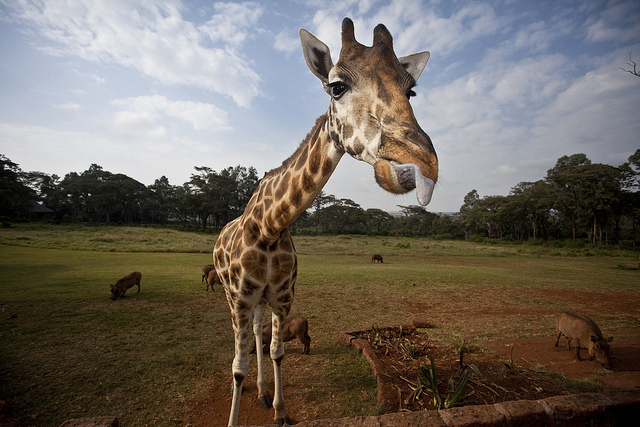 For years, there has been scant fossil evidence showing how the giraffe evolved to have such an admirably long neck. But now, the remains of a 7-million-year-old creature with a shorter neck provides proof that the giraffe's iconic feature evolved in stages, lengthening over time, a new study finds.

The researchers are calling the remains of this ancient beast true "transitional" fossils, not only closing an evolutionary gap in the rise of Earth's tallest animals, but also providing concrete evidence of how one creature evolved into another.

"We actually have an animal whose neck is intermediate [in length] -- it's a real missing link," said Nikos Solounias, a professor of anatomy at the New York Institute of Technology (NYIT) College of Osteopathic Medicine and the lead researcher on the study.

The creature in question -- Samotherium major --lived during the Late Miocene in the forested areas of Eurasia, ranging from Italy to China, Solounias said. [In Photos: See Cute Pics of Baby Giraffes]

Researchers first discovered S. major fossils in 1888, but the creature's importance wasn't realized until much later, said Solounias, who first got a glimpse of the fossils at a museum in Germany in the 1970s when he was working on his doctoral thesis.

"When I saw these bones, my breath was taken away," Solounias told Live Science.

The neck bones of S. major were shorter than those of a modern giraffe, but longer than those of the short-necked okapi, the giraffe's only living relative. Solounias didn't have the time or money to study the bones at the time, but he and his colleagues returned to them this year.

They analyzed the neck bones of four S. majorindividuals, three giraffes (Giraffa camelopardalis) and three okapis (O. johnstoni). On average, giraffes had 6.5-foot-long (2 meters) necks. In comparison, the necks of S. major were about 3.2 feet (1 m) long, and the okapi necks extended about 1.9 feet (60 centimeters).

The findings surprised them: Not only was the length of the S. major neck between that of the giraffe neck and the okapi neck, but its shape and the angles between bones were also intermediate.

"In every way, it's intermediate," said study first author Melinda Danowitz, a medical student at the NYIT College of Osteopathic Medicine. "It's completely between the two living species."

The researchers also examined how S. majorheld its neck. The findings are preliminary, but based on the position of the bones, it appears that S. major held its neck vertically, as a giraffe does, instead of horizontally, as a cow does, they said.

The finding is "very important," said Donald Prothero, a research associate in vertebrate paleontology at the Natural History Museum of Los Angeles County, who was not involved with the new study.

The findings were published online Nov. 25 in the journal Royal Society Open Science.