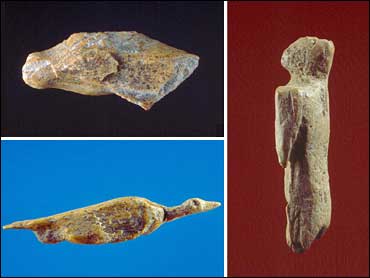 Small figurines carved from mammoth ivory more than 30,000 years ago have been discovered in a cave in Germany. Among the earliest undisputed artworks ever found, they are providing new clues into the migration and religious beliefs of early humans.

The figurines depict a water bird, what appears to be a horse's head, and a lion-man. The one-inch lion-man is similar to a nearly foot-long figurine previously found in a nearby valley, which had been cited as evidence of shamanism - the belief that spirits can be influenced by priests known as shamans.

Birds, especially water birds, are known to be favorite shamanistic symbols, which means "advocates of the shamanistic hypothesis are going to be very happy about these finds," said study author Nicholas Conard.

The two-inch bird is extremely lifelike, with a well-formed head and eyes and the neck stretching out as if in flight. Conard said the figurine appears to be the oldest known representation of a bird, although an owl depicted in a French cave may be as old.

While early man is often seen as brutish, the findings add to evidence that "the first modern humans in Europe were in fact astonishingly precocious artists," University of Liverpool archaeologist Anthony Sinclair wrote in a commentary accompanying the paper. Both appear in Thursday's issue of the journal Nature.

The researchers believe the figurines were created by early anatomically modern humans and not their Neanderthal predecessors. They are among the earliest examples of figurative art - which represents human or animal forms - and are as old as the well-known French cave paintings.

"Ornaments, figurines, flutes made of bones that we never find with Neanderthal man" have been found in the area, Conard said. "It seems we're very close to the epicenter of innovation."

Radiocarbon dating used to date the carvings is inexact, but the objects were almost certainly made between 28,000 and 35,000 years ago, and probably between 32,000 to 34,000 years ago, Sinclair said.

The trio joins a group of more than 20 ivory figurines found in the area, which Sinclair called the oldest body of figurative art in the world. Isolated older finds have been described as artwork, a claim that is disputed in many cases.

While shamanism has been suggested, the figurines also may have been made because the lion-man, for example, had qualities that the bearer wanted to possess. Or they may have been teaching aids, or even toys, for children, according to Sinclair.

Harold Dibble, a University of Pennsylvania anthropologist, said the figurines show early man's focus on the relationship between humans and animals.

"You're going way back to the very beginning of modern behavior and getting a glimpse into how they saw themselves in the world," said Dibble, who was not involved in the work.

If modern humans created the figurines, Conard said, the artwork supports the theory that modern man moved into the interior of Europe via the Danube River corridor.