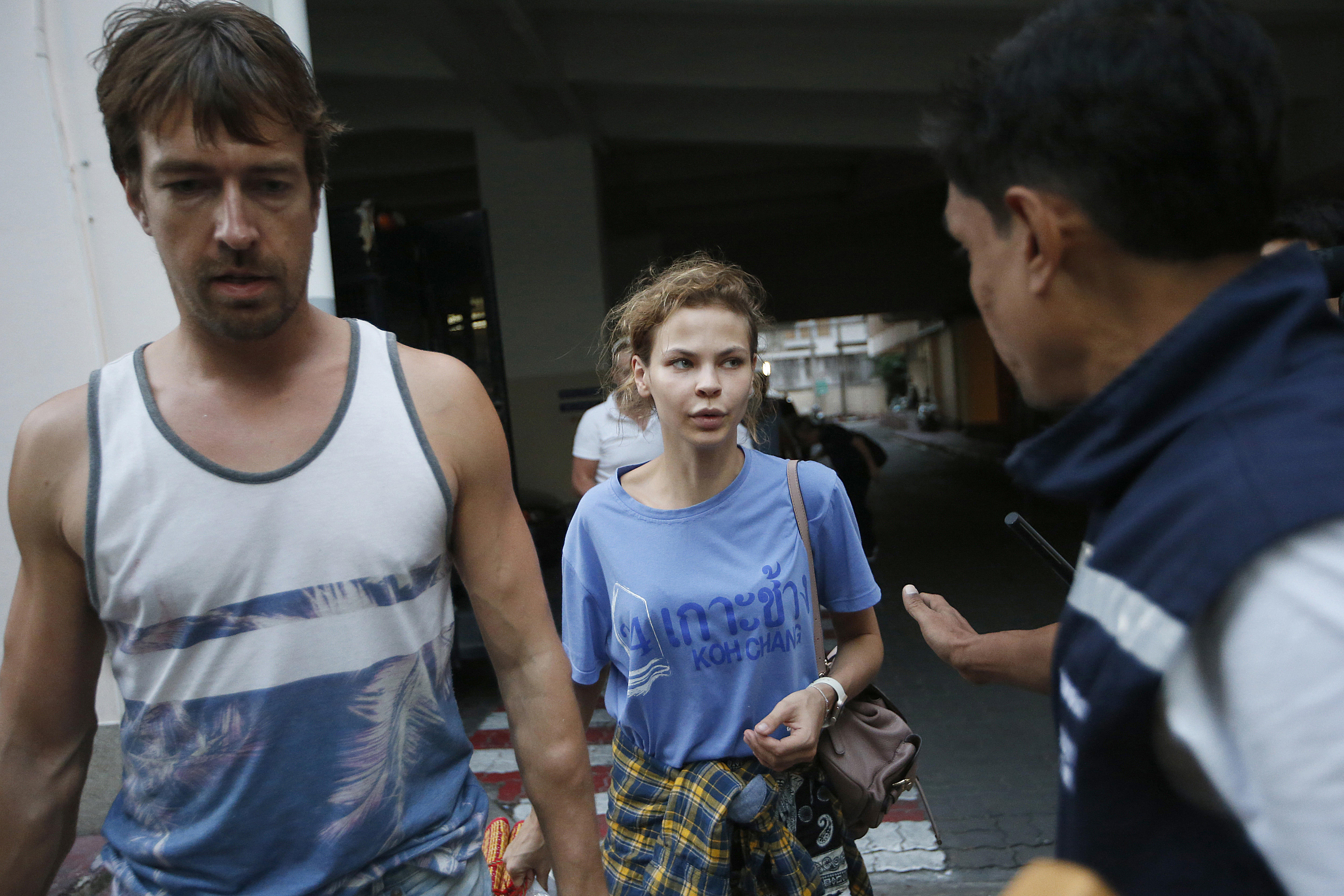 PATTAYA, Thailand -- A Belarusian woman jailed in Thailand for offering sex lessons without a work permit says she has a story to tell involving the Kremlin, Russian billionaires and even the president of the United States. Anastasia Vashukevich, whose extraordinary claims and racy selfies have propelled her to internet fame in recent weeks, told The Associated Press from a police van Wednesday that she fears for her life, and wants to exchange information on alleged Russian ties to Donald Trump's campaign for her own personal safety. But she refused for now to offer any such evidence, and it's not clear if she has any.

Vashukevich's story offers a glimpse into the shady world of Russian oligarchs. Mr. Trump's onetime campaign chairman, Paul Manafort, also had ties to that world through his consulting work for one of those oligarchs. Manafort has been indicted on money-laundering charges related to his overseas consulting work by special counsel Robert Mueller. But Mueller has offered no evidence that Manafort linked his Russian contacts to Mr. Trump's campaign or helped Russia meddle in the 2016 U.S. election.

That has not stopped Vashukevich from claiming she has such evidence as she faces possible deportation.

Vashukevich shot to fame in early February when Russian opposition leader Alexei Navalny, one of President Vladimir Putin's top foes, published an investigation drawing on Vashukevich's social media posts suggesting corrupt links between billionaire Oleg Deripaska and a top Kremlin official, Deputy Prime Minister Sergei Prikhodko. The report featured video from Deripaska's yacht in 2016, when Vashukevich claims she was having an affair with him.

Russians have focused on the ties between Deripaska and Prikhodko. But now Vashukevich says -- so far without proof -- that she can link the Kremlin to Mr. Trump and Manafort, who worked for Deripaska a decade before Mr. Trump hired him.

Even Navalny told the AP on Wednesday he has "certain doubts" that Vashukevich has any evidence about alleged direct ties between Russia and the Trump campaign.

"I think such statements are made because of fears for her own life because they have been detained in Thailand," he said, adding he believes her fears are well-founded.

Navalny's report made no claim that Vashukevich knew anything about a Russian campaign to influence the U.S. election, and she has produced no evidence that she does.

As for her claims of Deripaska's ties to the Kremlin official, Deripaska called them nonsense when Navalny alleged them.

In an emailed response Feb. 8, Deripaska's spokesman said: "These scandalous and mendacious assumptions are driven by sensationalism and we totally refute these outrageous false allegations in the strongest possible way."

Deripaska sued Vashukevich and her "sex guru," Alexander Kirillov, for breach of privacy. The Russian court imposed an injunction, and communications providers blocked access to Navalny's website for several weeks until he deleted the videos.

A Feb. 15 statement from Deripaska said: "Mr. Deripaska's claim is to protect his right to privacy and has nothing to do with any political struggle between Mr. Navalny and his political opponents."

A request for comment Wednesday from the Russian government went unanswered.

Peter Carr, a spokesman for Mueller, declined to comment Wednesday.

On Sunday, Vashukevich was arrested along with nine other people, including Kirillov, in the Thai resort of Pattaya while giving sex lessons to Russian tourists. Immigration Police Maj. Satawat Srirattanapong said the 10 were charged with working without a permit, and one with having an expired visa.

Vashukevich said she won't give details of what she knows until she is guaranteed she won't be sent to Russia.

"I can say something only when I will be in a safe place, sorry, because I am worried about my life," Vashukevich told the AP from a police van that was taking the detainees from Pattaya to Bangkok's Immigration Detention Center.

Vashukevich had earlier posted a video on Instagram, also apparently made while in custody in Pattaya, addressed to "Dear American media."

"I didn't want to tell you about many things. Now they're trying to lock us up," she said. "But now I'm ready to put together all the pieces of the puzzle that you have been missing, and back it up with audio and video regarding the ties of our esteemed lawmakers with Manafort, Trump and all this buzz around the U.S. election. I know a lot."

Mr. Trump has repeatedly denied that he colluded with Russia to influence the U.S. election.

Kirillov, the "sex guru" known in Russia for staging high-profile sexual happenings that usually involve sending scantily clad women out in public, told AP from the police van that the Russian government was behind their arrests.

"Political reasons. We know so much. So that's why they want us to go to Russia," he said. "We think that in a few days, maybe even today, they will send us to Russia, very fast, and I think you will lose us, and never see us more."

Kirillov and Vashukevich have both recorded their activities on social media, with racy photos and videos taken in many countries. One of the tamer photos on Kirillov's feed shows him posing in front of Trump Tower in New York. Kirillov, who Thai police say is Russian, posts under the pseudonym Alex Lesley. Vashukevich, who is from Belarus, uses the name Nastya Rybka.

They were arrested in a hotel meeting room in Pattaya, a seaside resort noted for its sex industry and popularity with Russian visitors. The lessons were attended by about 40 Russian tourists, many wearing T-shirts bearing the English words "Sex animator" with an arrow pointing to the wearer's crotch. Thai news media cited police as saying that the meeting was raided because hotel staff reported hearing strange sounds.

Satawat, the police major, said all 10 arrested people have had their visas revoked and will be detained at the Immigration Detention Center in Bangkok until the charges of working illegally are resolved. He said police have up to 48 days to process the cases before handing them to prosecutors. If they plead guilty, he said, their cases could end without trial and they could leave the country.

Canceling a visa normally allows a country to expel a person without having to go through the legal process of extradition.

Putin spokesman Dmitry Peskov denied Wednesday that the Russians' case had anything to do with a visit to Thailand by Russian Security Council Secretary Nikolai Patrushev. He said Patrushev often makes overseas visits arranged in advance.

"It's ludicrous to link this to the detention of Russian nationals in Thailand," he said.

Navalny said given recent events -- including a cocaine bust at the Russian Embassy in Argentina -- he wasn't so sure.

"I don't know what to think," Navalny told the AP. "Shows like 'Homeland' begin to look entirely realistic when you look at what is happening in Russia now. We thought the scriptwriters made the most impossible things up, but in Russia the most absurd things are possible."

How a heist of $1.65 million of gold coins unfolded in 9 minutes