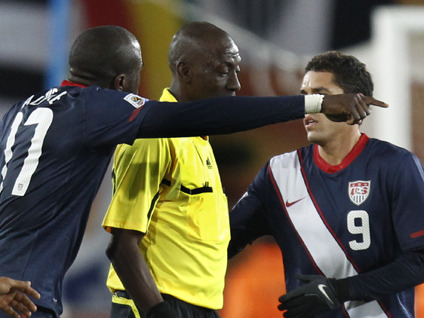 There is something very reassuring about the rage surrounding the U.S. goal disallowed by Koman Coulibaly, the referee from Mali, during the final minutes of a pulsating World Cup game against Slovenia on Friday.

All the anger — when ESPN analysts offer anger, you know this is serious — shows that the U.S. can care about football; it just needs sufficient incentive.

What is truly curious, though, is that FIFA, the body that runs world football, so far seems to have decided that Coulibaly doesn't need to explain his reasons for disallowing the 86th-minute goal by Maurice Edu for the U.S.

"We asked the ref many times what it was or who it was on and he wouldn't or couldn't explain it. I don't know what to think of the call because I didn't see any foul, just a normal free kick and a goal," said Landon Donavan of the U.S. team.

Coulibaly may never have to give a press conference. He never even has to send so much as an e-mail of explanation. He will never have to apologize.

He will never have to be, in short, Jim Joyce.

Joyce was the umpire who managed to blow the call that denied Detroit pitcher Armando Galarraga a perfect game when he called safe a runner, who was at least half-a-pace out.

Joyce performed a mea culpa. He was on the verge of tears. Players and managers even rallied around him, as many felt he was the best umpire in baseball.

Coulibaly might speak after the World Cup is over. He might. Yet FIFA's archaic, absurd, arrogant rules mean that there is no compunction for either him or FIFA to even explain what the foul was given for.

Like the Vatican, FIFA really doesn't see that explanations are terribly helpful. Indeed, FIFA would prefer it if you'd all just go and talk about something else.

Coulibaly's call cannot have been offside, because the assistant's flag would have been evident. So presumably he believes he saw some kind of infringement, some kind of holding.

But most neutral observers saw far more transgressions at that free-kick committed by the Slovenians. What the Americans might have done is an utter mystery.

It is a mystery that the arrogant leaders of FIFA plan never to have to answer. Because the more they answer, the more you know. And too much knowledge is a dangerous thing. Better to keep the mystery.

Yahoo Sports says it has inside information that a "deeper assessment" of Coulibaly's performance will be undertaken by FIFA's refereeing committee "at the earliest possible opportunity."

But the outcome is likely to be that of other referees who have made appalling decisions in World Cups.

No one will rally around Coulibaly. Instead, in classic Communist tradition, he will very probably be exiled, never to be heard from again. (At least, not during these World Cup finals.)

Though it's hard for us in America to gain perspective, his wasn't the worst decision ever made in World Cup play.

Dutch referee Charles Corver behaved as if he saw nothing at all, even though Battiston was stretchered away and ended up in a hospital in a coma, while Germany went on to win on penalties.

And imagine how those in Ireland must currently feel about Swedish referee Marin Hansson, who managed to miss not one, but two handballs by France's Thierry Henry in a final 2010 World Cup qualifying match against the Irish.

The handballs led directly to a winning goal. Hansson's myopia (and that of his assistants) didn't merely cost the Irish the game. It cost them passage to the World Cup finals.

This was the third highly controversial moment in Hansson's international refereeing career. He had made dubious decisions in the Champions League and in the Confederations Cup.

But because he was already pre-selected before the France/Ireland game, he is in South Africa. He is the fourth official for Saturday's game between the Netherlands and Japan. But he won't be allowed to referee a game. Not unless every half-competent referee turns up lame.

He's like the disgraced party member who is left pouring the tea for the Politburo.

When nerves are calmer — and if the U.S. qualifies for the next round — reactions to Coulibaly will become more muted.

All great coaches tell their players that they should never put themselves in a position in which a referee can decide a game. Put the thing beyond doubt yourselves. Don't make stupid mistakes. Don't defend naively. Score a lot more goals than the opposition. Don't give a bad referee an excuse to destroy your chances.

Unfortunately, against Slovenia, the U.S. was having to exit from a mess very much of its own making.

One can only hope that Coulibaly's decision will not ultimately affect the destiny of America's chances.

The truth is, though, that FIFA doesn't really care. When pressed to replay the Ireland/France game, it made statements of puffery about the "purity" of the game.

In Coulibaly's case, answers are unlikely to be forthcoming until matters are settled on the field, until time has had its wicked way. If they are forthcoming at all.

It's like plane crashes. You never seem to hear about what caused them until months or years later.

The lessons for the U.S., as well as for other teams who will suffer from poor refereeing decisions, is that you cannot let it matter, because you cannot do anything about it.

And FIFA will surely do nothing to help. It never has.

South Africa Falls to a Tragedy of Errors