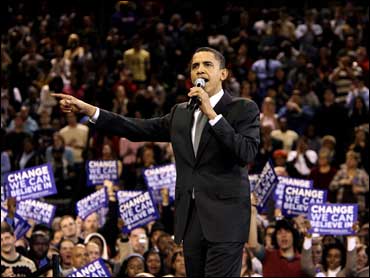 
Hillary Clinton spent years of maneuvering and over $100 million building what was supposed to be an impenetrable seawall capable of warding off any political assault. But Barack Obama has created a wave that began in the caucuses of Iowa, ebbed in New Hampshire, grew again in South Carolina, endured Super Tuesday and in Virginia and Maryland may have broken down the Clinton seawall at last.

From the beginning, Obama has faced the challenge of turning an air of excitement and energy into a movement on the ground and votes in the ballot box. In what's been called the Potomac Primary, he has gone a long way toward completing that task.

The erosion in Clinton's base of support in Maryland and Virginia was striking. Throughout this tightly contested race, Clinton has relied on the support of women, lower and middle-income voters, those with lower levels of education, older voters and Hispanics.

In Tuesday's voting, she lost to Obama overall in every one of those categories, winning only narrowly among all white voters and slightly larger among white women. The makeup of the electorate was clearly friendlier to Obama but he has eaten into areas of her strength. Hispanics, a small slice of the total vote, also broke for Obama.

The margin of victory for Obama in both states widened his lead in the overall delegate count, according to CBS News estimates. In Virginia, Obama won 64 percent of the vote and in Maryland with a similar number. In contests held since Super Tuesday, Obama has consistently won with numbers like that, not nail-biters.

The Obama movement has now materialized at the polls. In Virginia, over one-third of voters who turned out to vote in the Democratic contest were first-time primary voters.

The campaign has talked down caucus contests, where Obama has done so well, for being unrepresentative. They have questioned the media coverage of their opponent, challenged him to more debates and argued about the delegates in limbo from the party-sanctioned states of Florida and Michigan. Meanwhile Obama is raising money at the clip of about $1 million per day while Clinton's folks say their finances have "stabilized" after a $5 million personal loan from the candidate herself.

Such process arguments haven't fazed the tens of thousands of people who pack arenas at every stop to see Obama. They haven't stopped voters from flooding to the polls in record numbers from Iowa to Virginia and points in-between. Obama has won caucus states and primary states, big states and small ones, red and blue, north and south, east and west.

Clinton now faces a daunting challenge to not just stop a movement but do so emphatically. Next week, there will be contests in Wisconsin, where Obama leads in recent polls, and Hawaii, an Obama home state. Without a breakthrough win, Clinton will have gone ten straight contests without a victory. Those process questions may yet come into play with the battle over the unpledged super delegates who are likely to decide the final outcome but it's a long-shot at best should she end substantially behind in the overall vote.

Her campaign will look at making last-stands in Ohio and Texas on March 4th, two large states where she may have some built-in advantages. But the recent spate of losses has given Obama a widening delegate lead, one that will only be overcome with large-margins of victory for Clinton because of the proportional allocation system.

One factor working in Clinton's favor could be time. As clear front-runner, Obama is likely to undergo a new round of scrutiny in the three weeks between the Potomac primary and March 4th. Democratic voters yet to be heard will have time to ponder the decision their party appears ready to make. More importantly, Clinton will have that time to give them something to think about.

When Hillary and, more precisely, Bill Clinton went on the attack prior to the South Carolina primary and injected racial overtones into the discussion, it backfired. Big time. But Clinton has little choice now than to sharpen the distinctions she sees between herself and Obama. That will again create accusations that the Clintons are injecting race into the campaign. The Clinton campaign will have to figure out how it intends to walk that tricky path.

Clinton's seawall has broken down, bit by bit, contest by contest with the relentless waves of support for Obama, slowly eroding barriers once believed to be impenetrable -- and it's a tide that threatens to break down even more walls. In the first-ever Potomac Primary, the Obama wave finally crashed through Clinton's wall. Can her protection be rebuilt in time?