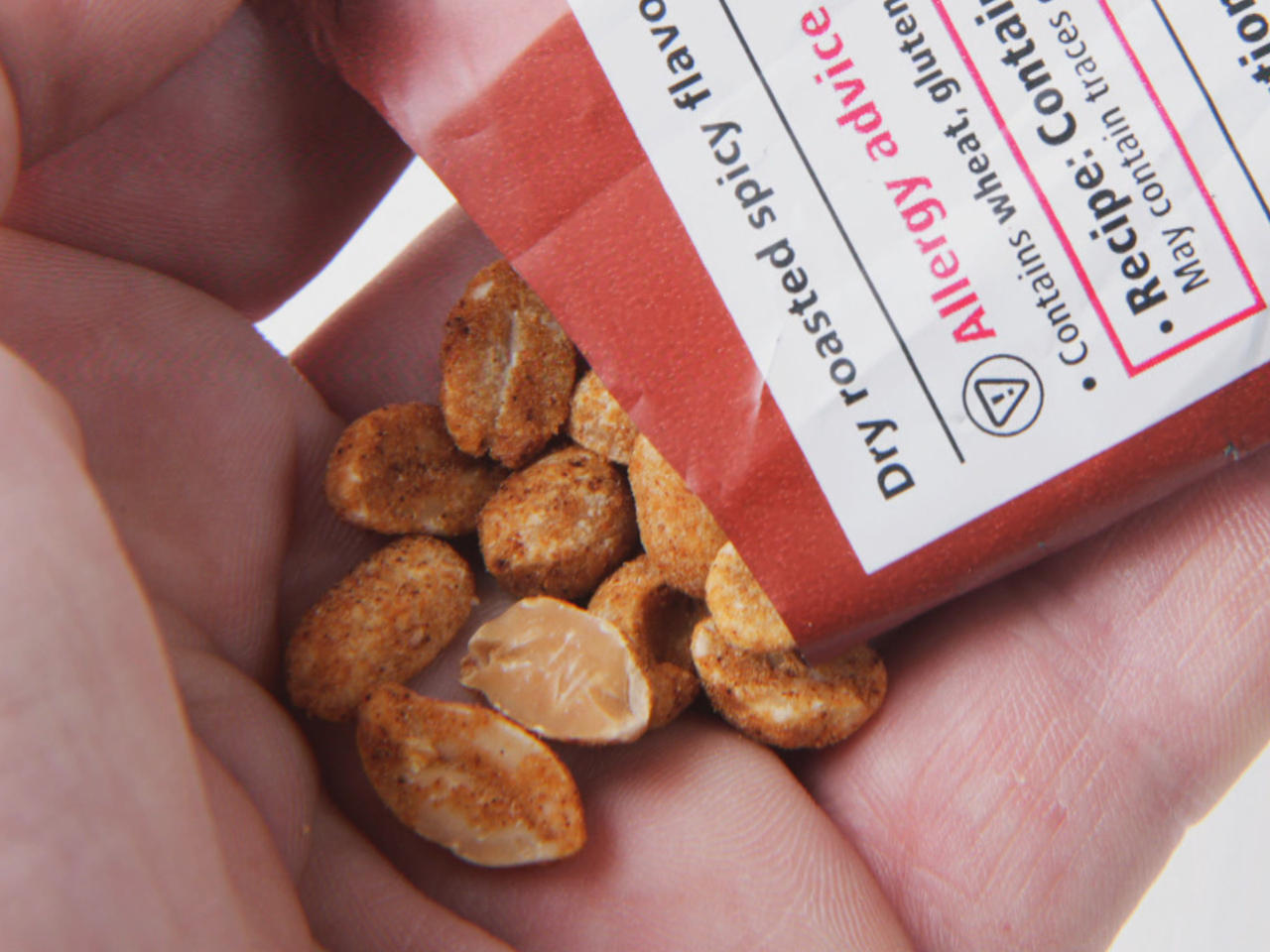 There was a time when peanuts were pretty much everywhere – in sandwiches, at baseball games, and on the snack table, especially for Super Bowl Sunday. But lately, this everyday favorite has for many become an everyday fear.

Megan Shaoul is mom to twins Henry and Piper. Both have a life-threatening allergy to peanuts. "They both completely passed out during their reactions," she said. "Literally the whole body becomes a hive, like fluorescent red, head to toe."

They have made approximately six trips to the hospital.

The Shaoul family is far from alone … and it's not just peanuts. While you may have grown up without ever hearing of a food allergy, now an estimated 26 million people, including six million children, have at least one – and an allergy to peanuts is believed to be among the most severe.

That's led to peanuts being banned at schools, stadiums, even the skies, where Southwest Airlines stopped serving them on its planes last year.

Megan Shaoul told correspondent Tony Dokoupil, "I just am petrified of peanuts, which to me, it's like someone having an open jar of poison in front of my kids. It's that dangerous."

But can all this danger once again be a thing of the past? Researchers now think they can slow or even eliminate the problem.

Nature up close: The best wolf ever

British tabloids and their "invisible contract" with the royals

Step one: a rare reversal of medical advice. Back in 2000, the American Academy of Pediatrics told parents to avoid giving their kids peanuts until three years of age … guidance that became gospel for many.

"It was a recommendation based on this intuitive feeling that, if you withhold, therefore you're going to protect the children," said Dr. Anthony Fauci, director of the National Institute of Allergy and Infectious Diseases.

"Intuition is not science, as I'm sure you would tell people," said correspondent Tony Dokoupil.

Dokoupil asked, "Was that an error?"

"I didn't make the recommendation, that's for sure!" Dr. Fauci laughed. "You know, I wouldn't say it was in error. I think what it was, it was a judgment call that, in the retrospect, was the wrong call."

So what's the right call? How about the complete opposite approach? Experts are now urging parents to feed their kids peanuts early and often. Dr. Fauci says exposure could lead to as much as an 81% drop in new cases. "I think there's the possibility and the likelihood that you will see a dramatic decrease in the peanut allergy," he said.

That is certainly welcome news to Bob Parker, president of the National Peanut Board. "Anytime you see an article about food allergies in general, there's going to be a picture of peanuts on it," Parker said. "There's no doubt, peanuts are the poster child of food allergies."

"Peanuts paid for school, they paid for her to grow up. And to have a son who was allergic to peanuts, I think she almost felt like she had failed me. But no, she had not failed me. There was nothing she could do."

That's in part because nobody – not even the experts – is certain where food allergies come from.

Dr. Scott Sicherer, who directs the Jaffe Food Allergy Institute at Mount Sinai Hospital in New York, says there are a lot of theories as to why there's been an increase in food allergies: "It goes from everywhere from what we call the hygiene or cleanliness hypothesis to vitamin D, to the way that the biology of our body may have changed, or even the food supply."

That's right: one of the leading theories is, we're just too clean.

Dokoupil said, "The hygiene hypothesis – everyone seems to like this one. We're not dirty enough?"

"The main hypothesis for the change, because there's a genetic aspect to food allergy, but it had to be environment to account for such a rapid increase; something had to have changed for us," Dr. Sicherer said.

While there's no cure for food allergies, there are encouraging experimental treatments, involving careful and supervised exposure, like small doses of peanuts in a pill, or on a patch, like the one Megan Shaoul's son, Henry, is getting.

"This bypasses the mouth, and slowly teaches the body to accept peanut and to try to stop attacking it," said Dr. Sicherer. "It's sort of like a nicotine patch for peanut."

"And by the end, they'll be at a baseball game eating a whole bag?" asked Dokoupil.

"That would be great!"

Hope for families and physicians – and for Henry, something sweet: "At least be able to eat Snickers or a Kit Kat and be fine," he said. "Or Twix. That's all I wanna eat!"