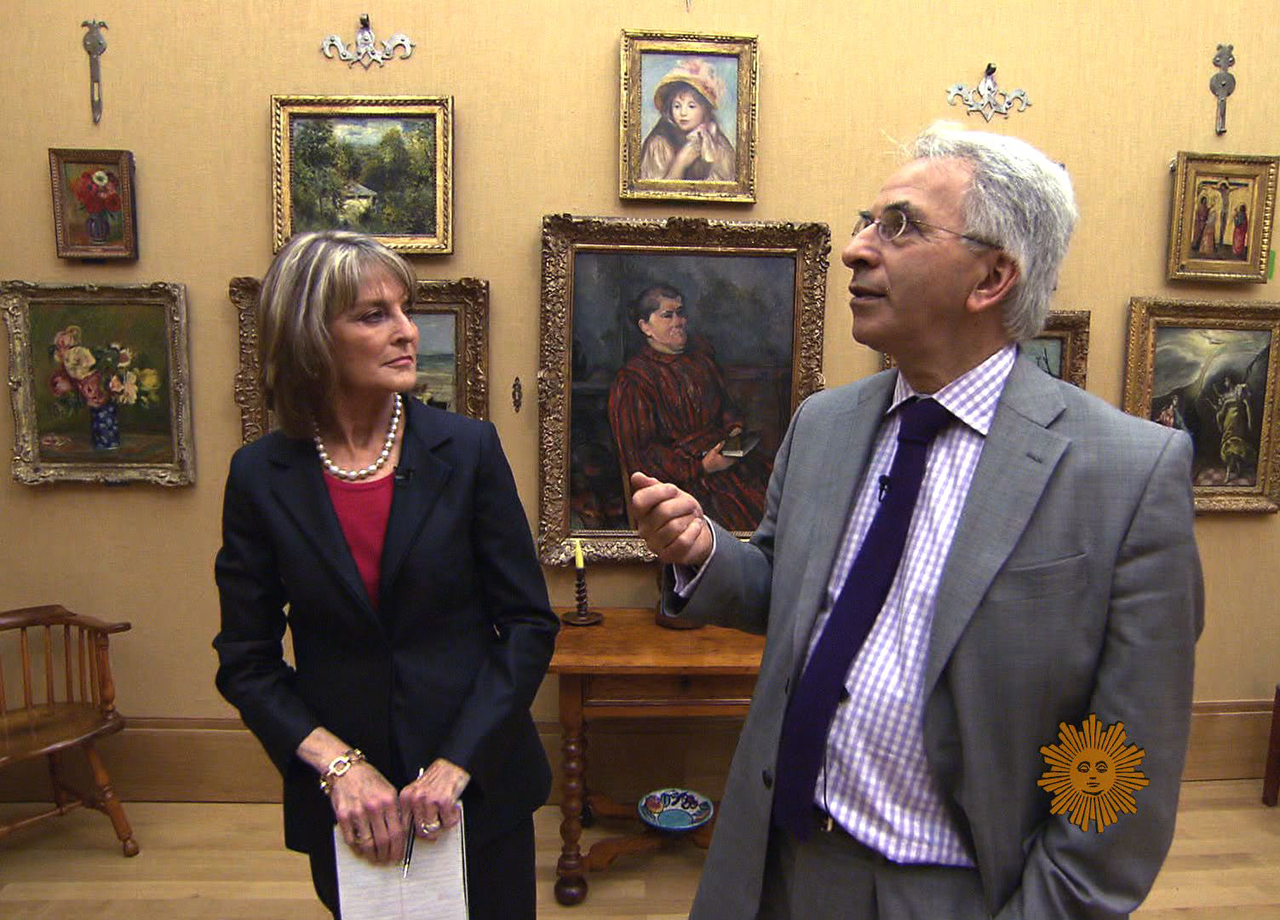 (CBS News) Priceless paintings are commonplace in the collection of the late Doctor Albert Barnes . . . a collection that returns to public view later this month. For art lovers, though, there's a divisive question . . . was the Barnes collection moved to its new location against his will? Rita Braver guides us through the controversy:

And there's Van Gogh, Seurat, Picasso, Modigliani, and many other major artists - incredibly beautiful and important works, like Cezanne's masterpiece, "The Card Players."

When asked how much "Card Players" would be worth, Gilman replied, "My lips are sealed."

But just to give you an idea, a small "Card Players" study sold at auction this month for $19 million!

Though Gilman is hesitant to put a number on it, the collection has been valued at more than $25 BILLION. So its move into a gleaming new $150 million building in downtown Philadelphia should be cause for universal celebration. ,/P>

Instead, it is a move mired in controversy, going back to the man who amassed the collection beginning at the turn of the 20th century: Philadelphia doctor Albert Barnes.

Brilliant and eccentric, he made a fortune in pharmaceuticals - and started buying what was then considered "modern art."

It was not well-received when he showed it in Philadelphia, according to veteran civil rights activist Julian Bond, whose family had close ties to Barnes.

"The reviewers just poo-poohed, and the art establishment in Philadelphia poo-poohed this kind of art," Bond said, "and he just developed this enmity against them. Plus, he was an onerous kind of person. He didn't suffer fools well."

So Barnes erected a building to house the art, next door to his home in suburban Merion, Pa.

The Barnes Foundation was rarely open to the general public. Its main purpose, he said, was to conduct classes in art appreciation.

Barnes made very specific provisions for what would happen to the collection after his death, giving Lincoln University (the historically black college where Julian Bond's father, Horace, was then president) the power to nominate most of the trustees to run the foundation.

"It was partly because Barnes wanted to put his finger in the eye of people in Philadelphia - 'Take that! I'm going to put these black people in charge of it!'" Bond said.

Barnes died in a car crash in 1951, leaving about $10 million to support the foundation.

But by the 1990s, the institution was going broke. And thus began a series of legal battles, including one waged by the Foundation Trustees, to raise money by sending the art on tour, in violation of Barnes' wishes.

In 1993, "Sunday Morning" correspondent Betsy Aaron reported on why foundation officials wanted to make $7 million by sending it on tour: They claimed that the building was deteriorating, and that the paintings were in danger. The court agreed, and the will was broken.

There were battles with neighbors in Merion, too, over traffic congestion when the Barnes allowed more visitors, and there started to be talk of moving the collection to Philadelphia.

To Derek Gilman, a supporter of the move, it was simply a case of a small, insular institution not being able to attract major funding.

"It was this very strong sense of, you know, 'we'll put our arms around ourselves and stay hugging ourselves,' and it doesn't work. It doesn't work philanthropically," Gilman said.

But a 2009 documentary, "The Art of the Steal," claims that Philadelphia political and philanthropic leaders had long plotted to get control of the priceless collection.

Ten years ago, Lincoln University ceded control of the foundation's board - thus, allowing the move to go forward.

So, love the idea or hate it, the collection was finally moved just weeks ago - including an enormous mural, custom painted by Matisse to fit the alcoves above the windows at the original Barnes.

In fact, the galleries Barnes built are replicated exactly in the new space, with the artworks displayed exactly as Barnes arranged them.

Gilman said the ceiling over the Matisse mural was built around its exact measurements.

Displays of paintings are punctuated by ironwork and metal pieces. Dolkert said Barnes felt the forms of the metalwork echoed or underscored the forms in the paintings themselves.

Perhaps proving that Barnes had a sense of humor, he placed this bare bottomed Renoir next to a similarly shaped piece of metal work - and above an ample chair.

Despite the faithfulness to Barnes' ensembles, there are still plenty of people who believe the art should never have been moved from its original space.

"It is a crime," said Bond. "And after all, it was Albert Barnes' art. He owned it, he could decide what to do with it."

But with the new building set to open next weekend, the foundation's director insists that bringing the collection to Philadelphia is true to Barnes' desire to educate. Now, more people can see the art, more often.

"Instead of coming once every four years, you can come four times a year," said Gilman. "So you don't have to rush around it all and say, 'Oh, my God, how many Cezannes can I see in the next 45 minutes?' You can say, 'I think I'll see these six Cezannes and then I'll come back next week.'"