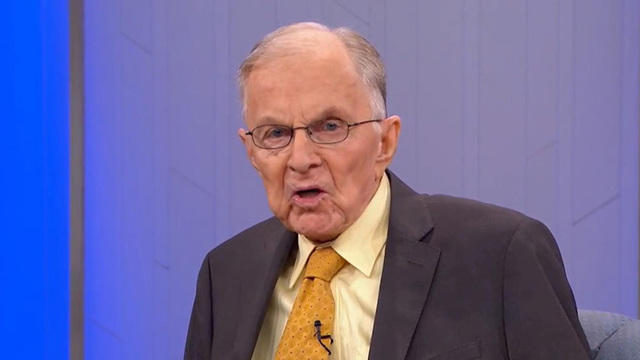 Like a lot of people around my age and in this business, some of my first memories of politics involve the McLaughlin Group, that fixture of Sunday morning chat shows. The first thing I remember thinking is even then how ancient the panel looked, particularly it’s namesake, the burly ex-Jesuit John McLaughlin, who died Tuesday at age 89.

The second thing I remember is how the panelists were always yelling at each other like it was some family gathering gone to hell. Pat Buchanan would snap at Eleanor Clift. Clift would snap back. McLaughlin would yell at them both. My dad would yell at the screen. It was, in its way, interactive television.

I saw it for the last time a few months ago, I guess, and it still looked like it was being broadcast from 1990. The stage looked leaky, something that probably smelled a bit like mildew. The graphics were laughable. The music was out-of-date. But the gang was, mostly, still there, and McLaughlin was still telling them, in that gruff Rhode Island accent, that they were wrong.

The ratings must have been terrible; they’d been in decline for at least a decade, the show having long since been upstaged by the more ridiculous antics of cable television.

Maybe nobody had the heart to cancel to damn thing, or perhaps nobody wanted to cross McLaughlin, known to possess one of Washington’s worst tempers. His abuse of staffers “was astonishing, unpredictable, and, in several instances, cruel,” The Weekly Standard’s Andrew Ferguson, who briefly worked for McLaughlin, wrote in 2007. “A single tirade could last for an hour.”

That shouldn’t be the takeaway, though, from McLaughlin’s remarkable life. A left-leaning priest in his younger days, he lurched rightward and embarked on a no-hope Senate run in 1970 as a Republican, much to the dismay of the Society of Jesus. Still part of the order, he became a Nixon speechwriter and the White House’s “resident Jesuit,” according to his colleague Pat Buchanan, which came in handy when the administration needed to justify bombing North Vietnam on Christmas.

McLaughlin became famous defending Nixon during Watergate, telling CBS News that the president was “the greatest moral leader in the last third of this century.” He compared the Watergate investigation to the Spanish Inquisition, insisted that Nixon hadn’t committed any crimes, and likened the House Judiciary Committee to Lord of the Flies, according to a 2014 story in the Jesuit magazine “America”.

McLaughlin’s relationship with the church hierarchy was understandably rocky, and the Jesuits ordered him to leave the White House as President Ford was taking office. He soon after left the priesthood to marry the divorcee who had managed his Senate run. Then it was off to radio and television, and eventually the show that became his legacy.

What we may forget about McLaughlin is that he was the first to run a public affairs discussion show that doubled as entertainment. It was all quite staid before he came along, liberal in a boring way, and quite self serious. Not so with McLaughlin, who “bellowed at his panelists and the panelists bellowed back; feuds developed among them, alliances were formed and broke apart in a shower of insults,” Ferguson wrote. “The 24 minutes of an average show zipped by at laser speed. Though the ‘Group’ never topped the duller shows in the ratings, its reach and power left the others sputtering about a decline in standards.’”

Looking back from an age of “Hannity”, it’s hard to fathom anyone getting that upset about the McLaughlin Group, tame by today standards. But upset they were, with The New York Times calling it “five barking, squawking, ideologically split pundits who argue national and foreign affairs in a go-to-hell fashion that would have made Walter Lippmann, the patrician columnist of an earlier, gentler age, weep at the loss of any last shred of political gentility.” Liberal panelist Jack Germond, who famously hated McLaughlin and quit the show via fax, called it “trash” that he went on only to put his daughter through school.

It was a more innocent time, I guess. But I didn’t know the news shows that the Times revered; I knew McLaughin, and all that came after it. The man may not have been nice, but that was part of the charm, and even at the end it could still be funny - just a few months ago, John Oliver was getting some mileage off a minute-long clip of McLaughlin angrily introducing stories.

It’s customary when someone of note passes to say that there will never be anyone like them ever again, or some cliché to that effect. But in McLaughlin’s case, that’s almost certainly true. And there will come a time, likely sooner than later, when we’ll look back on McLaughlin, a pundit of an earlier, gentler age, who would weep at the loss of an era when the fighting onscreen was at least fun.