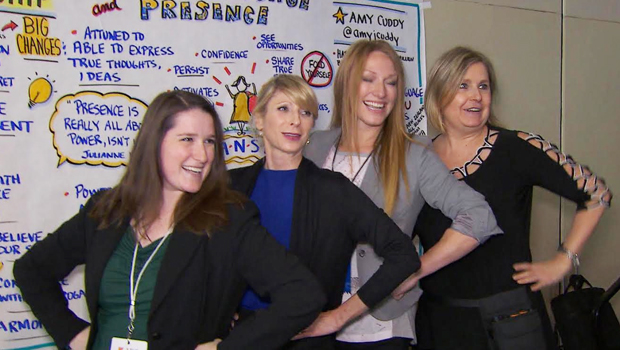 Can striking the proper pose put you in good standing for the rest of your life? Our Cover Story is reported now by Rita Braver:

It all began when she was tapped to give a prestigious TED Talk in 2012. "We make sweeping judgments and inferences from body language, and those judgments can predict really meaningful life outcomes, like who we hire or promote, who we ask out on a date."

And Cuddy notes, "When you pretend to be powerful, you are more likely to actually feel powerful."

Using images of everyone from Oprah and Mick Jagger to world leaders and athletes, she talked about the relationship between posture and power. "So what is your body language communicating to me? What's mine communicating to you?"

But, she says, it's more than how you appear publicly. Believe it or not, her studies show that if you stand like a superhero privately before going into a stressful situation, there will actually be hormonal changes in your body chemistry that cause you to be more confident and in-command. "Before you go into the next stressful evaluative situation, for two minutes try doing this in the elevator, in a bathroom stall, at your desk, behind closed doors -- that's what you want to do," she said.

Her TED Talk has been viewed more than 30 million times, with "power posing" popping up on television shows like "Grey's Anatomy."

But make no mistake, Cuddy's work is grounded in science. As a Harvard Business School professor, she's conducted a series of experiments like the one she demonstrated for us: student volunteers stand in a "power pose," or hunch over in a "powerless pose" for a minute, before putting a golf ball. Early results indicate that, for both men and women, the first putt is closer to the hole after the power pose.

"When you do the opposite, when you act like a scared animal by slouching and collapsing inward, you perform worse," Cuddy said.

In her new book, "Presence," Cuddy writes about how your body can influence your mind, presenting a whole series of poses that can help people feel powerful. Like the "CEO Pose": "Lean back, and open your shoulders," she instructed.

"I hope this doesn't mean that I have to fire a lot of people," said Braver.

U.S. presidents have struck a similar pose while sitting in the Oval Office.

David Gergen, who has worked for four presidents and now teaches at Harvard's Kennedy School of Government, has brought Cuddy in to share her theories with his students.

"I thought she was on to some things," he said. "We don't verbalize it, we don't write about it so much, but we notice it."

"We don't learn this stuff in school," Braver said.

"No, we don't teach it, but you notice it if you are in the arena; you see it all the time," Gergen said.

He talked about working in the White House for Richard Nixon, who prepared himself before a Cabinet meeting: "Throw his shoulders back, put a big grin on his face and walk in -- boy, I'm ready for the world!

"Ronald Reagan had a lot of that -- his bearing made a big difference in how people thought of him; he walked John Wayne-like. Those things make a difference, and I thought Amy was on to some things that just weren't in the research."

It made a difference in Cuddy's own life in 2011, when friends put her in touch with a man doing his own power pose.

It was a pose that Cuddy compared to that which wild animals looking for a mate actually strike: "It does resemble, you might have noticed, a peacock with its tail feathers spread," she told Braver.

"So you thought he was searching?"

"I'm not immune to the effects that I talk about, so I think I fell for it," Cuddy laughed.

There has been some criticism of Cuddy's theories from other researchers, some saying that it only works in very specific kinds of circumstances.

"I welcome challenges that help us grow the science and move it forward," said Cuddy. "The better we understand it, the better we can use it."

Cuddy points out that power posing can't magically give you knowledge or abilities that you don't already have. "It's personal power," she said. "It's about bringing your best self forward, [and] having the keys to unlock that best self and show it."

But what is really remarkable about Amy Cuddy is that she is able to do the work she does. While a sophomore in college, she was in a car crash. She was thrown out of the car, and suffered serious traumatic brain injury.

At one point she was told that she had a diminished brain function. "I had lost cognitive function. I had lost 30 IQ points," Cuddy said. "And I was told that I should probably figure out something else to do, that I was unlikely to finish college."

But she powered through, going on to get a Ph.D. in psychology from Princeton.

Yet she had a secret: She said she felt like an imposter, someone who didn't belong there.

And it was her dramatic confession of feeling like an impostor that mesmerized the audience at her TED Talk, when she spoke of trying to help a student with similar fears:

Now, they come to meet her, and write her from all over the world. And now, she says she has one major goal:

Yad Vashem: A mission to remember the victims of the Holocaust
Thanks for reading CBS NEWS.
Create your free account or log in
for more features.
View CBS News In
CBS News App Open
Chrome Safari Continue
Be the first to know
Get browser notifications for breaking news, live events, and exclusive reporting.